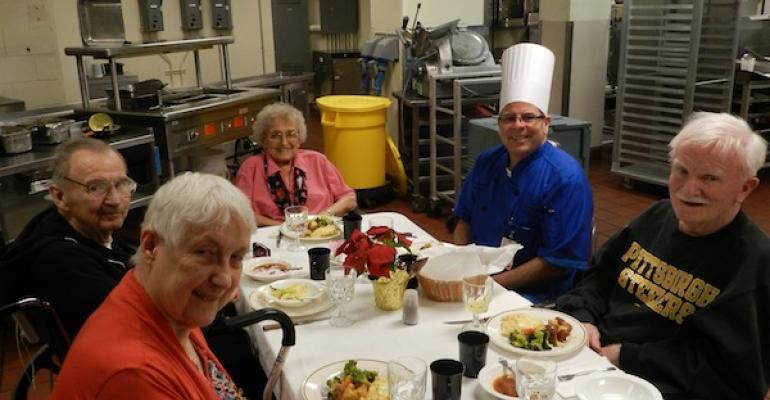 A Peek Behind the Curtain

Chef’s Table/tour program at Jennings Center senior living facility gives residents a look at what goes on behind the scenes in the kitchen.

At Jennings Center for Older Adults in Garfield Heights, Ohio, groups of residents get a look behind the scenes in the kitchen, along with a nice sit-down meal as part of the dining department’s person-centered care approach. The program gives groups of three to six residents a tour of the back-of-the-house areas; later, they have lunch in the kitchen at a nicely set table where they have a front seat view of all the activity that goes into preparing meals for the residents and day care clients.

“It gives them a whole new respect for culinary services because it gives them a perspective on what we do,” says Michael Mills, culinary services director and executive chef. “We have to put out about 850 meals a day. Aside from our assisted living and nursing home facilities, we also have full child and adult day care during the week and 30 to 40 people we feed each day who live independently in the three apartment buildings.”

Mills says he began the tour program about eight years ago when Jennings opened an assisted living facility. “I started it because I thought the people in assisted living only knew the assisted living part and didn’t realize we also have 157 people we have to take care of in our nursing home, plus all the other things we do.”

It opens their eyes, he says. “They’ve never seen a freezer or cooler that big and a stockpot that makes 25 gallons of soup. Many have never seen a #10 can.”

The tours as originally conceived ended with a snack of cookies and coffee in the kitchen, where the residents could watch the back-of-the-house activities.

About a year ago, however, Mills decided to up the ante. “I said to myself, ‘You know, chef’s tables are a big thing in this business, so why don’t we just try doing a chef’s table in the kitchen!”

Now, each group makes its tour on a Monday as before, but then returns the following Monday around lunchtime to a table in the kitchen set with china and linen, where they first get to see the tail end of the bustle just before the food is taken out to be transported to the various service points.

“After everybody leaves it gets nice and quiet, and then we have our lunch,” Mills explains.

The meal concludes around the time the staff begins returning from making their deliveries, and the residents can then see the wrap-up activities.

The tours and sit-down meal have a dual purpose, Mills explains. Not only do they generate appreciation for the volume meal production operation (and the care with which it is executed) but is also, frankly, a monotony breaker, a special event that also provides some entertainment for the residents.

Jennings has about 60 assisted living residents and 157 nursing home beds. The adult day care accommodates about 50 and the child day care up to 40 more (more in the summer). The culinary operation also feeds the Jennings staff in an onsite retail venue called Sister Rose’s Café.

Mills has worked with a number of organizations, including Restaurant Associates for a time, for which he helped open premium dining operations at then-new Cleveland Browns Stadium in 1999. In 2000, the experience of having an uncle in hospice care prompted him to consider the senior dining segment.

“Three months later I saw an ad for Jennings. I applied and, as they say, the rest is history.”