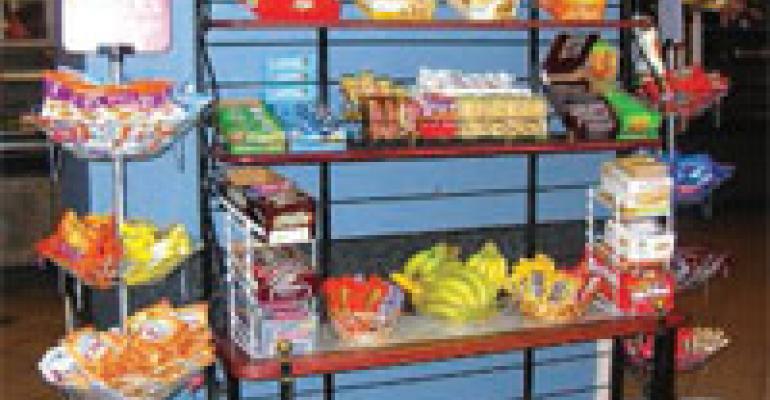 A pilot packaged snack program developed by Kraft Foods for the Premier, Inc., purchasing cooperative has added some $800 a week in sales to the main café at Resurrection Medical Center/Holy Family Medical Center in Chicago. Called Right Product, Right Price, Right Time, it is the product of a unique collaborative effort in which Kraft has incorporated the products of several other snack manufacturers to give customers more choice, says Ron Rech, director of food & nutrition services for the medical center.

“We wanted to capture more point-of-sale and grab and go sales,” he says. “We've never done well with these kinds of things.” Rech says he first heard about the program through his position on the Premier's advisory board and volunteered his café as a test site for an eight-week pilot.

“They came out, examined the space, relocated the snack displays, monitored them and charted their progress. They did everything,” he says.

The displays succeeded for a number of reasons, Rech surmises. The variety and the prominent brands were certainly a plus: in addition to Kraft and Nabisco products, the program also uses products from Kellogg's, Quaker Oats, Nature's Valley, Hershey's and Mars. The mix includes healthier 100-calorie packs among a 30-item mix to appeal to all sorts of customers.

Also, the pricing — a uniform one dollar per item — made the items an attractive impulse purchase or add-on. That was helped by the strategic location of the displays and their configuration, which utilizes vertical space to cut down on the footprint and save valuable floor space in the cafe.

Rech says he plans to incorporate the program into all eight of his café locations after seeing the success of the pilot.