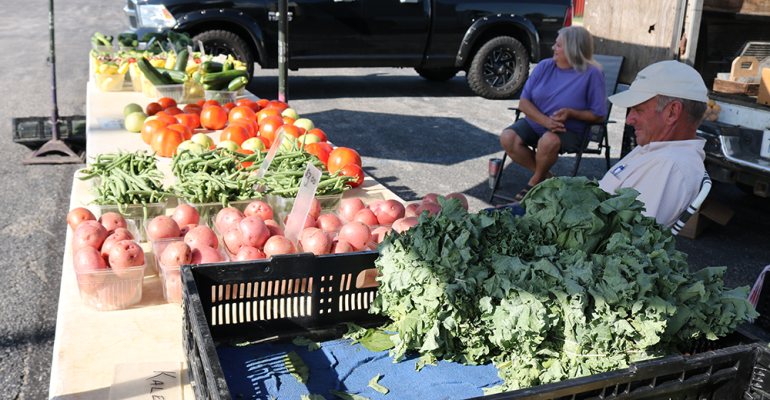 Events feature not just local produce but also meats like beef, pork and even wild salmon.

The nutrition services department at the 98-bed facility Heartland Regional Medical Center (HRMC) in Marion, Ill., has been holding pop-up farmers’ markets a couple of times a month since July.

“Our company has a strong commitment to serving fresh, sustainable, farm-to-table items, and were looking for more ways to provide those fresh items,” says Jason Bessette, vice president for foodservice management company HHS, which operates dining at RHMC, about how the markets originally came about. “There are farmers’ markets all over the area, so we thought, why not have one here?”

The first one took place July 9 and they have been held twice a month since, with plans to keep them going at least through early October’s apple season. Originally, they were scheduled from 1 p.m. to 5 p.m. but now have pushed back an hour to 2 p.m. to 6 p.m. due to a request from workers from two businesses, Aisin and General Dynamics, located across the street who often come to RHMC’s Courtyard Café for lunch. They get off work at 5 p.m. each day, so they asked for a later time that allow them to come to the market after work. 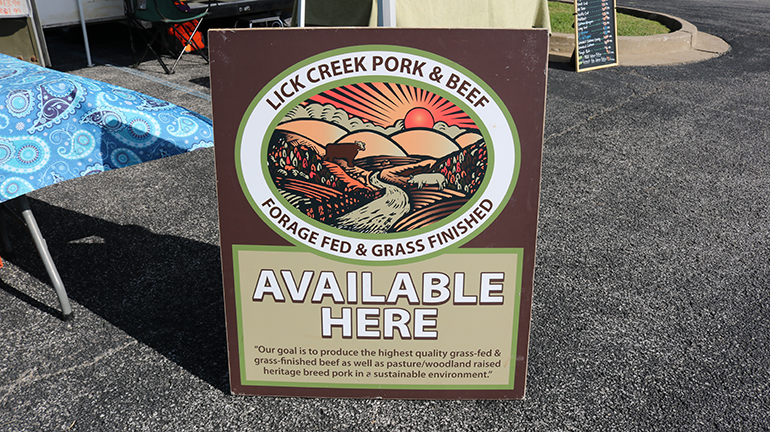 Aside from produce, the markets also feature products like meats.

The markets generally feature maybe half a dozen vendors who sell not only freshly picked produce but also proteins like beef, pork and even wild Alaskan salmon thanks to a local firm called Wild Alaska Salmon & Seafood whose proprietor travels to Alaska each year and brings back the catch.

As word has spread, more customers been showing up, not just staff and patients at the medical center and workers from across the street but also people from the surrounding community. It has also drawn the attention of more farmers, says Julie Moses, director of nutrition services at HRMC.

“Since we started this, I’ve actually had vendors and farmers committed to other farmers’ markets tell me they wanted to get on board with this, so I’m hoping that next year we will start earlier and have more [farmers participating].”

On farmers’ market day, Executive Chef Wayne Arment tries to incorporate the products that will be on display in the market into his dishes.

“I have information on all the [ingredients] we’re using right there at the chefs table so people can pick up and read them while watching me cook the product for them,” he says.

Executive Chef Wayne Arment has an onsite smoker unit that turns out delicacies like the smoked turkey on this sandwich.

Most of the farmers currently participating are too small to serve as regular vendors to institutional accounts such as HRMC, though at least one—Link Creek Pork & Beef—does supply the hospital as well as a nearby community college. For the others, this is a way to reach more customers and a way for the hospital to forge closer community relations while promoting its commitment to fresh, healthy foods.

Some Link Creek’s meat goes into Arment’s smoker unit at the hospital, which turns out some of the highlights of his menu, such as smoked pork steaks and butts and smoked prime rib, that are served at least once a week. In fact, the Courtyard Café, which is the hospital’s cafeteria, has become quite a destination restaurant for the locality, generating about half its sales from customers not associated with the hospital as either staff or patients.

One popular service of Courtyard Café is a preorder option at its deli that lets customers place orders for sliced meats and cheeses and even party trays and have it ready for pickup when they’re going home. 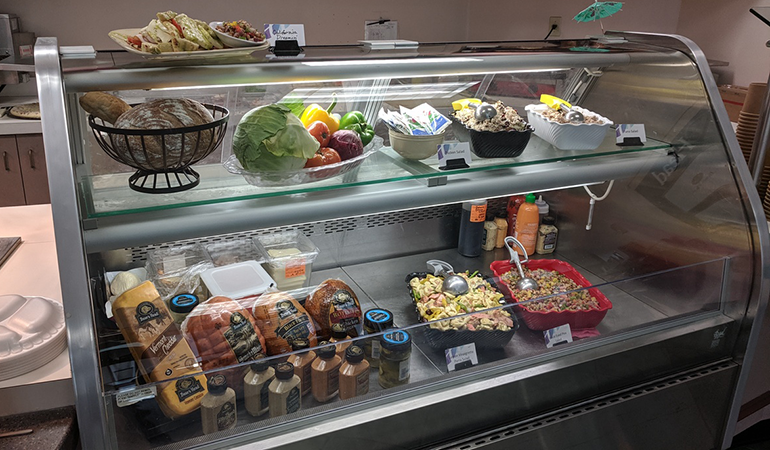 The deli station takes preorders of sliced meats and cheeses and even party trays that they have ready for pickup.

Aside from the barbecue, Arment also operates a pasta bar at in the chef’s table rotation where diners can get pasta dishes with various sauces and protein toppings to order. The chef’s table rotation also features delicacies like fish tacos, Buffalo mac ‘n cheese, a burrito bar and a wing bar. There’s also a composed salad station with protein topping choices like shrimp, chicken and steak and housemade dressings. The entrée station offers two entrée choices a day such as chicken Parmesan, spaghetti and meatballs, Cajun turkey, country fried steak, pepper steak, chicken enchiladas, fried chicken and catfish and meatloaf. Each come with two sides like cheesy potatoes, fries and steamed veggies.

About 75% of the baked items served are made in-house in the kitchen’s own bakery section.

Breakfast is served from 6:30 a.m. to 9:30 a.m. daily with Wednesdays reserved for a breakfast chef’s table that features an omelet, French toast or pancake bar.

“I try to give them the best choices I can every day,” Arment says.