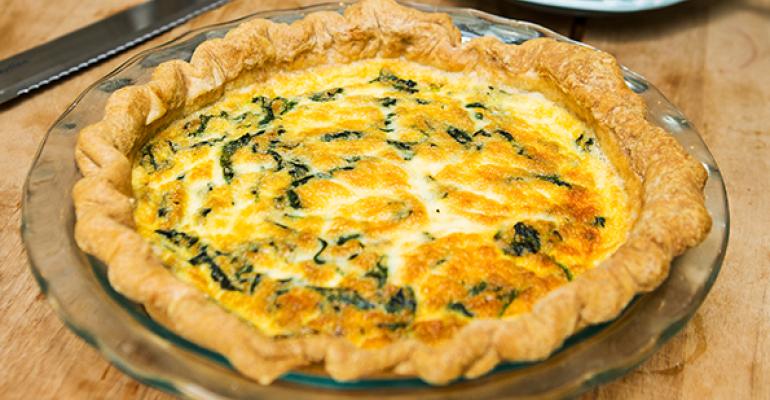 It's not every hospital that offers patients massages and has dietitians, social workers and a chaplain on staff. But Memorial Cancer Institute takes an integrated approach. Its latest offering encourages cancer patients to eat well and brings renowned chef Michelle Bernstein and her recipes to the hospital.

"Cooking for people that are going through chemo, it’s a very delicate process,” Bernstein said during an interview with Memorial. “They are not always given the right choices. And what I wanted to do was come in and change that. Give them food that’s a little more fresh and little cleaner, yet more flavorful. And, of course, very sensitive to all the things they might be going through.”

Although Memorial Cancer Institute is an outpatient facility, many of their patients spend all day at the hospital receiving chemotherapy and other treatments for cancer.

For lunch, patients at Memorial were usually given boxed meals consisting of sandwiches, chips, a cookie and a piece of fruit.

Although there are plenty of amenities at the hospital, like a nail salon, when it came to food, "we don't have a lot of fabulousness to offer them," Teddy Speropoulos, director of oncology support services, says.

Until Chef Bernstein came along.

The staff at Memorial Cancer Institute met Bernstein, a James Beard award-winning chef, when she was a speaker and gave a cooking demonstration at a symposium at the hospital. Not surprisingly, the event was packed. Speropoulos spoke to Bernstein around this time and discovered that Bernstein was born at Memorial Hospital, part of the Memorial Health Care system, and that her mother had struggled with cancer twice.

Following the conversation, both parties were excited to work together, and with the financial help of the Memorial Foundation’s Pink Angels, a foundation supporting programs mainly for breast cancer services, the partnership started in earnest last year. Bernstein began working on recipes for substitutions and additions to the boxed lunches for oncology patients at Memorial Cancer Institute. As part of the one-year agreement, Bernstein also trained hospital staff.

The program will eventually be rolled out to cancer patients at Joe DiMaggio Children Hospital, which is also part of Memorial Health Care system.

While Bernstein had the experience of cooking for her mother when she had cancer, she says she still learned a lot from the staff's nutritionists about patients' needs.

"I had no idea that chemotherapy caused so many issues physically and chemically in the body and that certain foods actually heal while others could possibly hinder," Bernstein says. "Watching Chef Pierre [Flerismond, executive chef at Memorial Regional Hospital] put out thousands of dishes every day in the hospital is pretty humbling."

Excess sodium, which can lead to high blood pressure, is a major concern regarding cancer patients' diets. "There’s a lot of cancer drugs that impact heart health," explains Cynthia Wigutow, a registered clinical dietician at the Memorial Cancer Institute who worked closely with Bernstein on food preparation and menu plan.

Meals for oncology patients should be nutritionally dense, as many patients suffer from loss of appetitive and are in danger of not getting enough calories. Cancer patients often suffer from a persistent metallic taste, but flavorful recipes can help overpower that taste. A dish like Bernstein's loaded granola, which is high in protein from nuts and a bit sweeter than other granola thanks to lots of dried fruit, fits the bill. It was one of the first items served to patients and hospital staff.

"I know that everybody makes their own granola, but I think ours is a step above the rest and is incredibly addictive," Bernstein says. "We can't seem to make enough in the hospital, as it's a favorite of the doctors nurses, administrators and patients alike."

As delicious as these might sound to some, "patient buy-in is important," Wigutow says.  "We can’t take away the sandwiches because some patients just want that."

Bernstein agrees that a slow approach to change is best. "Changing menus obviously you take it little by little," she says. "I don’t expect to come in and take it all off and put all kinds of new thing on. It goes step by step."

Starting in March patients began having the option of some of Bernstein's dishes, which come wrapped in distinct packaging with nutritional information and Bernstein's name.

"We wanted to look different and have a different feel to it aesthetically," Speropoulos says. And now there's a touch of fabulousness to offer patients for lunch.

"You’re never really happy to go to the hospital," Bernstein says. "But at least you will feel good about the experience."