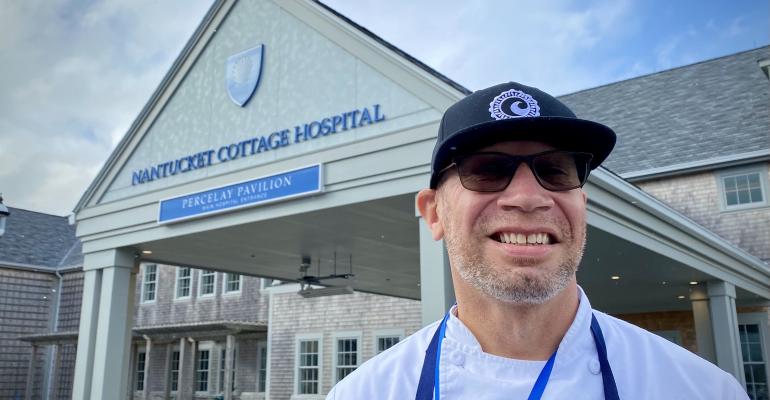 Braised short rib hash with poached eggs and salsa verde. Indian butter chicken. From-scratch lasagna. Crispy tofu wraps with spicy vegan mayo. If this sounds like the kind of food you might get from the chef of a four-star restaurant, you'd be right. But it's not being served at a restaurant. It's being served at a Nantucket Cottage Hospital, an 18-bed facility in Massachusetts where chef Neil Hudson is now running the kitchen.

A former executive chef for some of the island's best fine dining restaurants, Hudson moved on to the hospital after being treated there as a patient himself. "I fell asleep at the wheel on the way home after doing a 70-hour workweek and I hit a pole," Hudson says. "The airbags didn't go off. I was in the hospital for eight days."

The experience left Hudson eager for more work-life balance. So when he heard that Nantucket Cottage Hospital's chef was leaving, he applied for the job--and got it. "I started thinking, this is an opportunity to use my skill set to give back to the community that I live in and to the people that took such great care of me [when I was injured]," he explains.

Hudson's first priority was adding more scratch-made to the hospital's menu. There had been a heavy reliance on processed and premade items like tray enchiladas and lasagnas, but Hudson was able to source fresh herbs like chives, tarragon, and thyme plus other ingredients from the hospital's suppliers to make the menu offerings more flavorful. "I can still be creative and do what I want, culinarily," he says. "Now we're making our own beef stroganoff or lasagna, our own marinades, brining the chicken before its grilled. These little things make a difference."

While sourcing restaurant-quality ingredients was quick and easy, getting the hospital kitchen up to the same level is a longer-term process. Hudson hopes to bring in a cryovac machine, for instance, but acknowledges that state-of-the-art cooking equipment isn't the hospital's first priority. "Their mission is to take care of people and get them well. Donation dollars are precious, so I'm not going to be looking for the bells and whistles," he says.

While the focus of restaurant food is all about flavor, with patient meals, nutrition is another important factor. "You need to know about different dietary restrictions and what the codes mean. That's a lot to think about. Still, if someone is on dialysis and needs a breakfast sandwich, you should make it a good one," he says.

Hudson isn't the only one experiencing a learning curve. Going from reheating tray meals to making restaurant-quality fare has been an adjustment for his staff too. "They're inspired and motivated because they see the change [in the food] and they want to learn. We're all learning off each other," says Hudson.

Speaking of employees, Hudson has faced the same COVID-related staffing challenges as other foodservice operations. The hospital cafeteria currently offers breakfast and lunch for a staff of 285 people, but a lack of labor has kept dinner service off the table. (The cafeteria is also open to the public when COVID restrictions aren't in effect.) "That could change, but we'd have to hire another shift," says Hudson.

While labor shortages haven't come as a surprise, the division of responsibility that has come with working in a unionized kitchen has. "In my previous jobs, the executive chef runs the kitchen, but some of those responsibilities aren't on my plate here," Hudson says. He's not currently involved in foodservice budget decisions, for example, but hopes that may change in the future. "Instead of having a certain amount go towards food packaging, maybe we could put that towards equipment, for instance," he explains.

Despite the challenges, moving to the hospital has been incredibly rewarding. On Thanksgiving Hudson sent a full dinner down to the family of a patient who had passed away that day. "The following day the nurse told me that it made a huge impact on the family. There's this possibility of being able to give back here," Hudson says.

Topping it all off is the fact that he's found some much-needed balance between life and the kitchen. "I have weekends off for the first time. I have a nine-year-old daughter and a five-year-old son, so that's huge," Hudson says. "It's really made an impact on my family life and my physical and mental wellbeing."