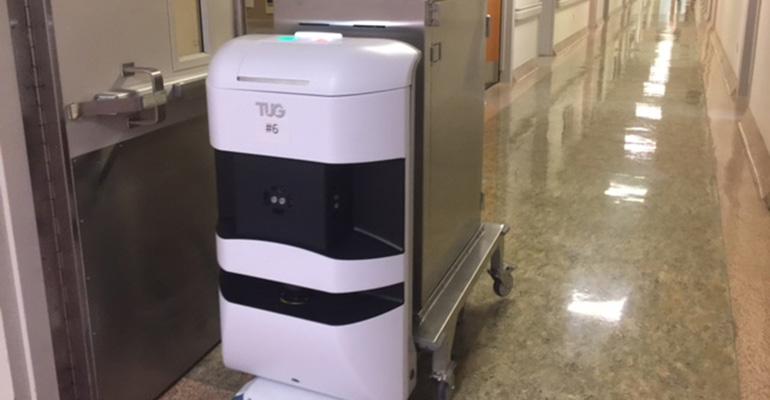 Margaret Kipe
An automated TUG delivery vehicle hauls patient meal trays from the production kitchen to Reading Hospital’s HealthPlex tower, a distance of about a quarter of a mile.
News & Trends>Healthcare

New TUG automated delivery units make the nearly three-block trudge between the Reading Hospital’s production kitchen and its new Healthplex patient tower, eliminating a time-wasting and alienating use of labor.

Reading Health’s newly opened eight-floor HealthPlex for Advanced Surgical & Patient Care tower at its campus in Reading, Pa., is a striking example of the ultra-modern, high-tech healthcare facility, with 24 operating rooms equipped with high-definition cameras to allow real-time consultation during surgeries, bedside electronic medical records, no-touch wave-motion doors that prevent the spread of germs and even an 88,000-square-foot rooftop garden, one of the largest in the state.

Located on the far west side of the sprawling campus, the new HealthPlex tower has 30-bed in-patient units on each of its top five floors for a total bed count of 150. The patients in those rooms, like most of the others in the 720-licensed-bed, multi-building campus, can order room service meals at any time between 6:30 a.m. and 6:30 p.m.

Which poses a potentially huge headache for the onsite dining staff, because the production kitchen where patient meals are prepared is located at exactly the opposite end of the campus, and the pathway between the two facilities is the equivalent of nearly three city blocks.

“My patient services manager and I got out our GPS while they were constructing the building and we walked the distance to where the building was to be and I said to myself, ‘It’s a quarter of a mile!—and we’ll have to be doing this back and forth constantly!’” recalls Margaret Kipe, director of nutrition services.

“It’s not value-added time,” she explains, “and I want my staff to be fresh and rested so they can interact with the patients rather than exhausted from trudging [back and forth] all day long.”

But how to avoid that long march?

Kipe dismissed the idea of using manned vehicles such as golf carts to facilitate travel between the buildings as inadequate, but unmanned vehicles were another matter. She had explored the idea of robotic transport vehicles years ago but dismissed it because at the time the systems required significant infrastructure additions like floor tracks.

“I was at AHF in Salt Lake City in 2015,” Kipe recalls, “and one of the award winners there with me [Kipe won the group’s Benchmarking award] was from the University of California at San Francisco Medical Center (UCSFMC) and she had all this cool stuff with robots and computers. I wanted that cool stuff too!”

That other award winner Kipe was so jealous of was UCSFMC Assistant Director Ami Bhow, winner of the Spotlight Award, and during her acceptance speech, she talked about how UCSFMC had worked with vendor Aethon to implement its TUGS robots, which now utilized precision route mapping and didn’t require floor tracks. They can even open automated doors and control certain designated elevators.

“I thought, ‘Whoa!’ because [the infrastructure additions like tracks] was always the obstacle for me,” Kipe recalls. “So the day I walked there and back from this new building and saw what that would mean in terms of mileage, I thought, ‘Oh man, I gotta go back to the robots.’”

It wasn’t the easiest sell job to convince the hospital’s administration to invest in the TUGs, Kipe admits, but the fact that robotic TUGs have already been used successfully in a number of medical facilities did help make the case, and Kipe eventually got the go-ahead.

In fact, not only did she get the TUGs but, unlike at many other institutions where the robots serve multiple departments, Reading Hospital’s nutrition services currently has eight all to itself.

Kipe says that was to ensure a smooth transition. “We felt strongly that while there is a lot of potential there, we wanted to make sure they were operating in a way we were comfortable with and the bugs had been worked out before we began planning other stuff,” Kipe says.

After a couple of months of test runs, the first units went live January 7 and the system ramped up slowly as the patient floors in the new tower became occupied.

Patient meal orders come in to the hospital’s call center, which then generates tray tickets in the production kitchen, where the food is prepared to order. Meanwhile, a TUG is dispatched to the kitchen to pick up the order(s)—the units sit on generators that charge their batteries when they are not in use.

The food is loaded on the TUG, which then takes it to one of two drop-off points located in the first- and third-patient floor lobbies in the Healthplex.

It sends a text message to the appropriate floor ambassador when it is close so it can be met at the drop-off point. Soiled trays and dishware are then loaded on the unit for backhaul to the dishroom.

The trip one way takes about 11 minutes, Kipe says. Taking everything into account, from loading the trays to making the trip to getting to the drop-off point and back takes 27 minutes on average. Any trays not picked up within 15 minutes at the drop-off are returned to the kitchen to ensure food integrity and safety.

The TUGs did not mean a reduction in the nutrition services department’s labor force. In fact, the opening of the Healthplex required the addition of six new nutrition services FTEs, though it would have been nearly triple that without the TUGs, Kipe estimates, so “the ROI is pretty compelling.”

It’s even more compelling when hidden costs are factored in, she adds.

“It would be such a physically demanding job that I don’t know how I would keep a staff that large, that engaged, that on-board without having turnover,” she says.

As it turns out, Kipe’s original estimate of 25 miles a day in meal delivery treks to and from the new tower was probably too conservative as the TUGs have already been putting in 22.8 miles a day, and that’s with just three of the five patient floors open.

Currently, the TUGs only serve the new tower, while the more numerous older inpatient floors located closer to the kitchen are still served manually with staff doing the meal deliveries.