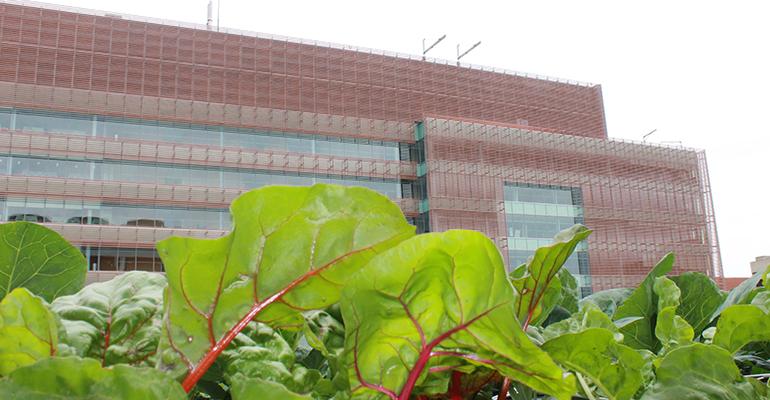 Crops grown in Boston Medical Center’s garden are used not just in patient and retail dining but donated to former patients who are food insecure but need to maintain healthy diets.

For the past 14 years, Boston Medical Center (BMC) has operated one of the country’s most extensive and elaborate follow-up programs to assists economically disadvantaged former patients who need help to follow a healthy diet to keep from being readmitted. A key to the program is a food donation component that gives eligible former patients “prescriptions” for packages of healthy foods like fresh fruits and vegetables they can get from the hospital’s preventive food pantry.

This year for the first time, the pantry’s offerings include fresh produce grown right onsite, on the roof of the medical center’s power plant building. In the first two months—planting in the 6,000-square-foot garden only began in late April—1,200 pounds of crops like bok choy, kale, collard greens, Swiss chard, radishes, lettuce and spinach were harvested and began appearing both at the pantry and also on patient trays and on the salad bars in the retail cafeterias.

“By the end of the season we anticipate about 15,000 pounds to be harvested,” David Maffeo, senior director of support services, proudly says.

The Asian station in BMC’s three cafeterias use crops like the bok choy in its stir-fries, and the greens are a staple on patient trays, he explains. Depending on the crop, the garden’s bounty either replaces what would ordinarily have been purchased commercially or is added to the menu to take advantage of its freshness.

Of course, the garden cannot begin to meet the volume needed to supply the needs of the 508-bed hospital, but it is a symbol both the facility’s commitment to sustainability and also its support for the community.

Discussions about the project began well over a year ago, Maffeo recalls.

“We had talked about how it would be great to have our own farm and be sure it touches the entire BMC community,” he says. “Here in the middle of Boston, access to fresh food is not plentiful, so we felt it was the right thing to do.”

The idea was first put in place about a year ago. Among the preparations was a tour of Fenway Farm, the onsite garden at Fenway Park, Boston’s Major League Baseball ballpark.

The power plant building was a natural for the garden, with plenty of natural light flooding its roof. It’s also secure, enclosed by a wall atop the structure’s third floor about 50 feet from the ground that still makes it visible from the Shapiro building, the medical complex’s largest ambulatory facility, which gets about a million visitors and patients annually.

“Every day, they can see what we’re doing up there,” Maffeo offers.

They can also see it more up close by signing up for a tour. In fact, in the week before FM spoke with Maffeo, some 300 people had toured the space.

BMC employees can also sign up to work in the garden. Aside from a professional rooftop garden manager, everyone else who works in it is a volunteer.

The garden itself consists of 2,300 repurposed milk crates filled with soil from a local compost concern. Growing techniques are all organic with no use of artificial fertilizers or pesticides.

Once picked, the crops are rinsed before being brought to the kitchen, where they are put through the veggie wash station to ensure proper sanitation.

BMC’s preventive pantry program, which the rooftop garden helps support, is a uniquely major undertaking for a healthcare system. Each month, some 7,000 low-income former patients with conditions like cancer, HIV/AIDS, inflammatory bowel disease, diabetes, obesity, food allergies and other chronic conditions visit the pantry to get food, especially perishables like fresh fruits and vegetables and meats that are generally too costly for their budgets. Much of it comes from the Greater Boston Food Bank.

The former patients are referred to the pantry by their primary care providers, who write “prescriptions” for supplemental foods that best promote physical health, prevent future illness and facilitate recovery. The pantry manager is a registered dietetic technician qualified to determine what foods correspond to each patient’s dietary needs as prescribed by the physician.

To make sure the fresh product is properly used, BMC operates a demo kitchen where chefs demonstrate how to prepare the products being given away in the pantry.