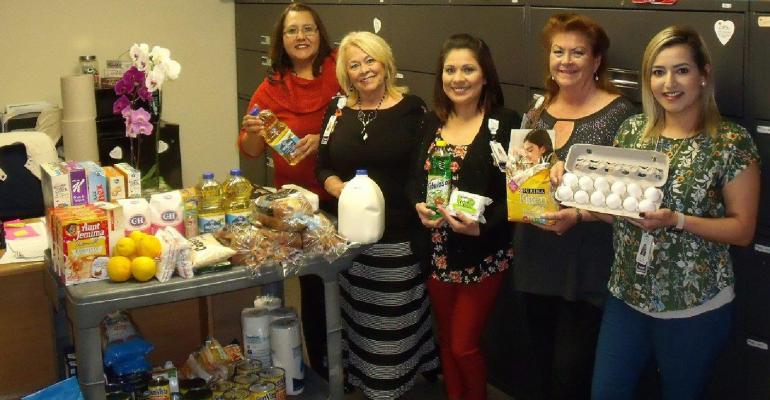 For two weeks, the hospital also set up a pop-up store in the human resources office after gathering wish lists from hospital staff and volunteers for hard-to-get grocery items.
News & Trends>Healthcare

San Gorgonio Memorial gives back to volunteers during pandemic

When cases of COVID-19 really started to increase across the U.S., San Gorgonio Memorial Hospital in Banning, Calif., halted all non-essential services as well as its very active volunteer program. Instead, hospital staff flipped the tables by initiating a free food program to provide support and resources to volunteers, most of which were senior citizens from the local community.

“We have around 40 volunteers working here at any one time,” says Lakeisha Hawthorne, the hospital’s food service director. “They do everything from run our tea cart, which they take around to patients, staff and visitors to offer beverages and snacks, to helping register incoming patients into the emergency room and working shifts at the gift shop.”

Whenever the volunteers are working, they can dine free at the hospital cafeteria, some even taking meals home for dinner. “Some of these volunteers have worked at the hospital for 15 and 20 years,” says Hawthorne. “We know them like family.” A portion of them do not have family nearby, Hawthorne notes, and really relied on the hospital community for support and regular meals.

With the volunteer program suspended, Hawthorne says her boss brought food to one particular volunteer, who is advanced in age and lives alone. “I started thinking that she’s probably not the only one who could really benefit from this kind of support during the shelter-in-place order,” says Hawthorne, “so we called all active volunteers to find out who would like assistance with food and groceries.”

Related: The road ahead for onsite dining: The impact on hospitals 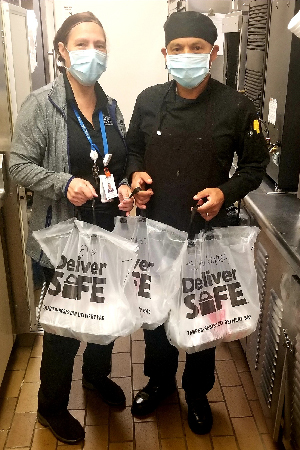 Photo: Foodservice staff put together meals for volunteers, often during their breaks.

In the end, 15 of the 40 volunteers accepted the hospital’s offer. Hawthorne organized staff and supplies to deliver each of the 15 volunteers one hot meal a day as well as shop for any supplies needed from stores.

“One challenge was making sure we could cook something appropriate for them as some of the volunteers had special diets such as low sodium and vegetarian,” says Hawthorne. “We had to do some adjustments to make sure that it would be something that they would be able to actually eat.”

The hospital sent daily meals such as barbecue or baked chicken with mashed potatoes, vegetables, as well as fruit and a drink to the 15 volunteers. “Some asked if we could just send them salad bar items like strawberries and cottage cheese,” she said. “We always tried to make sure our delivery included a protein and was well-rounded in nutrition.”

Another hurdle was that they needed drivers as well as a set schedule of who was delivering when. To Hawthorne’s surprise, hospital associates from across departments volunteered to take weekly or even daily delivery shifts.

“The fact that during the COVID-19 pandemic crisis, we had the hospital’s director of respiratory, nurse director and registration official dedicating their time to make sure these volunteers were looked after was incredible,” she says. “I've worked at a few hospitals and this hospital is completely different. People here truly care for the community so much.”

After a month, with COVID-19 cases still on the increase, the free food program transitioned from five days a week to two. “The associates delivering the meals were really busy with their healthcare roles so we decided to deliver meals on Monday and Wednesday only along with a care package of pantry items,” she says. They sent easy-to-cook frozen meals such as chicken pot pies and mac ’n cheese, as well as healthy snacks like popcorn and applesauce.

With the volunteer program still on hiatus, about 11 of the original 15 are still receiving food twice a week free of charge as others have felt safe enough returning to stores. “We’ve sent out over 300 meals in addition to bags and bags of groceries since starting this program in mid-March,” says Hawthorne.

Hawthorne says the free food program is entirely funded by the hospital and that she received complete support from the administration. “It really takes everybody getting behind it,” she says. “We couldn’t have been this successful if it were just the dietary department doing it alone.”

In the end, it's proven to be more rewarding than labor-intensive. Hawthorne says she has received cards from volunteers so appreciative of the support. “More than the food, what’s really impacted those who live completely alone is that consistent personal contact and interaction,” she says.

Hawthorne was more surprised to find how devoted hospital staff was to staying involved. “When the hospital really started to get busy, I tried to alleviate the registration person from her weekly delivery route, for example, but she said what she looks forward to most in her week is going to see the volunteers,” she says.

“It's really an honor for us to give back to these volunteers because they've given so much to the hospital,” Hawthorne says noting that volunteers contribute upward of 35,000 hours on average annually.