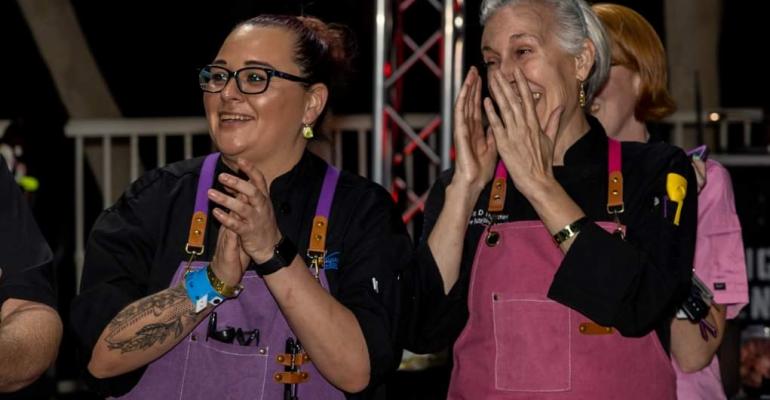 Chefs Hayley Hill and Trula Hepner receiving the news that they were the winners of this year’s Havasu Top Chef competition.
News & Trends>Healthcare

HHS Chef Trula Hepner and her team at Havasu Regional Medical Center are seeing new signs of respect—and a bit of envy—from the restaurant community around town after besting local commercial restaurants in a mystery basket-style cooking competition.

Cue the ‘Rocky’ theme music, because this is a story about the underdog. A scrappy hospital food crew takes on big-name local restaurants in a contest with a level playing field: flavor.

The competition featured two mystery baskets full of ingredients and before they dove into that, each team was tasked with preparing 750 appetizers for the event. The HHS team served crispy cubes of pork belly with mint-marinated watermelon and a sticky, tangy glaze.

For the first mystery basket—frozen shrimp, seabeans, dehydrated cremini and trumpet mushrooms, raw ramen noodles—Hepner describes their dish: “We made a fresh apple, celery and fennel salad with olive and oil and lemon…soaked the mushrooms in hot water along with the seabeans to hopefully leach out some of the salt and flavor the mushrooms at the same time,” she says. “We sauteed the shrimp in butter, white wine and fresh lemon, along with some bacon for a crunchy element and because bacon makes everything better.” 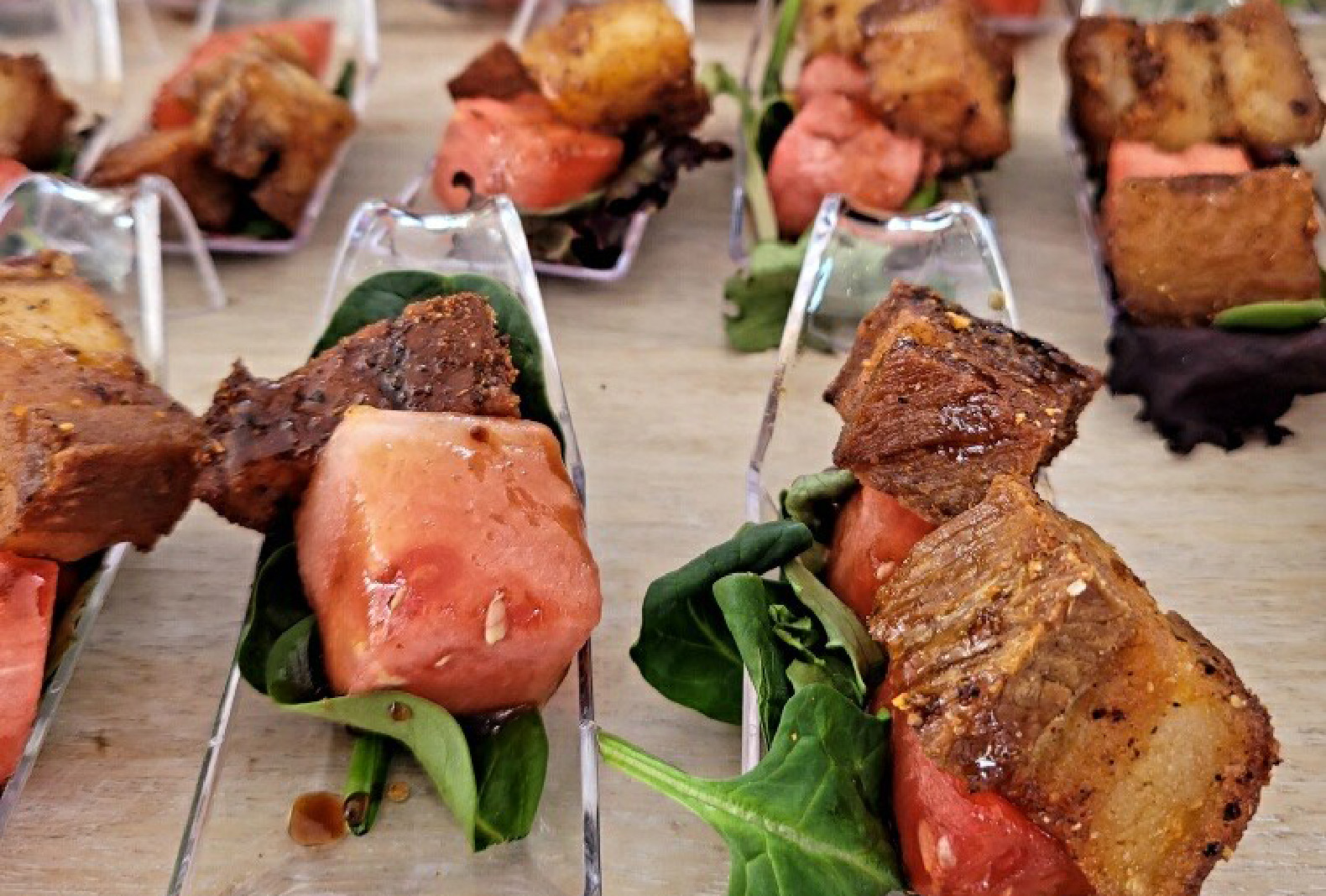 The second and final round’s mystery basket contained sweet potatoes, chipotle in adobo, cream cheese and hanging tender beef (also known as hanger steak, a cut prized for its flavor). With this, Hepner made a dry rub for the steak with ancho chile, citrus and smoked paprika, seared the steaks on the grill then sliced on the bias. The cream cheese became a sauce with fresh orange juice and heavy cream blended together. The sweet potatoes were shaved on a mandolin for pommes anna-style fries topped with butter. An oniony ragout showcased the mushrooms and a squeeze of lime set off the whole plate.

After the competition, the talk of the town’s restaurant community centered around this hospital team that seemingly came out of nowhere, revealing long-held prejudices around hospital food. 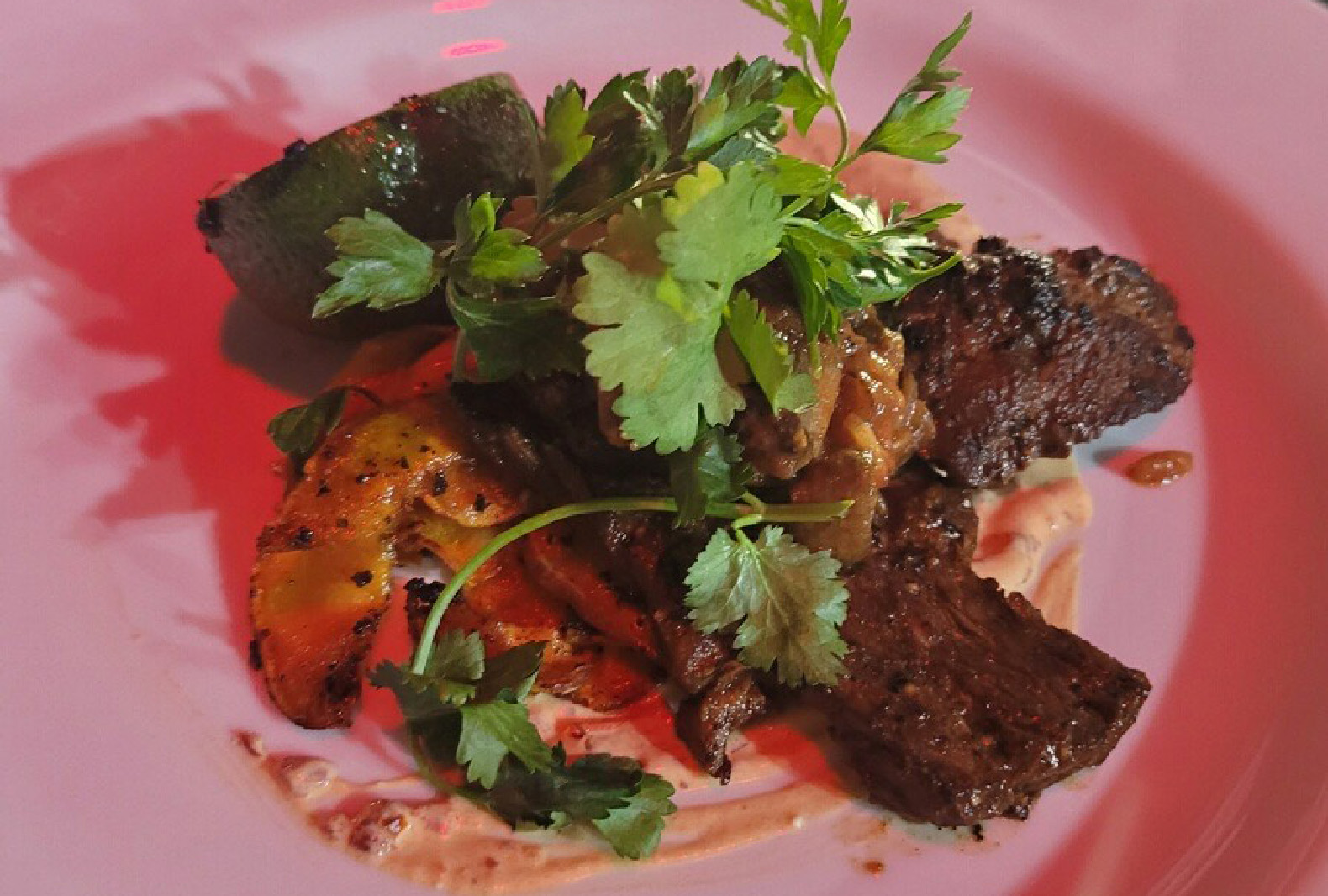 Not so, Hepner says.

“We are behind the scenes, but I’m so proud of the fact that we’ve kicked booty…People are salty that we won. The facts are, there’s not an operation, a vitamin, a therapy or a drug that will replace good nutrition,” she says. “If you don’t eat well, you’ll never be healthy. And when it becomes the most critical, that’s when you’re in the hospital. If we served you crappy food that you don’t want to eat, that has no flavor, how are you going to get better? We give you good, beautiful food you’re going to enjoy so you can get out of the hospital. Some people still seem to be amazed that we know how to do our jobs. At a catered event, two surgeons were enjoying our hot honey duck wings, and one of them turned to me and said, ‘These are so good’ like he was surprised. I said, ‘You know, how about you don’t be amazed that I know how to do my job, and I won’t be amazed that you know how to do your job.’