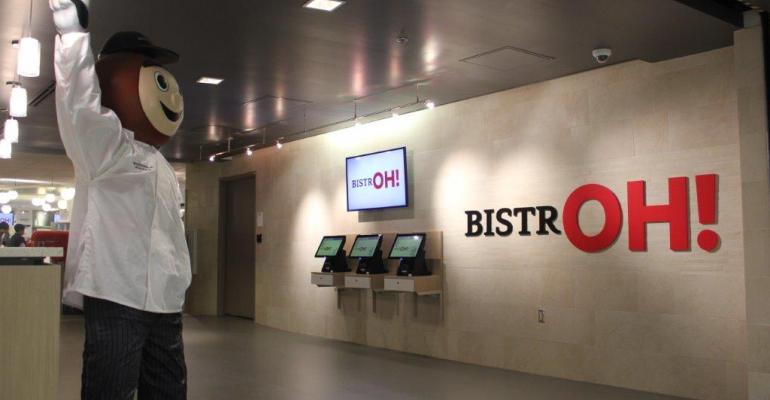 <p>The installation of nine kiosks for ordering at BistrOH! has helped increase the speed of service and customer satisfaction.</p>
News & Trends>Healthcare

The Ohio State University Wexner Medical Center in Columbus is appealing to tech-savvy customers with nine self-service kiosks. Featuring menus for three of the six stations located inside its café, BistrOH!, the kiosks allow diners to place a fully customizable order before they reach the counter. Prompts walk customers through the ordering process, a ticket gets printed, the order is prepared, the number is called and the customer proceeds to the cash register where the cashier scans the aforementioned ticket and completes the transaction.

Currently, the kiosks connect to the hot grill station, pizza station and deli. They are collecting on average 1,000 of the 4,200 orders placed daily. Beginning in August, the kiosk will also connect to OSU’s signature salad station.

“Our other concepts don’t offer any decision points, so there’s no value in having the kiosks connect to them,” says Mike Folino, associate director of nutrition services, who has been with OSU for more than 12 years and was instrumental in getting the kiosks up and running.

Three kiosks are located at each of the café’s two entrances. Three others are located within the space itself.

“The goal was initially to help speed up service,” Folino says. “Instead of one person ordering at a time, nine people can be ordering from kiosks while another person can order directly from the person at the station itself.”

“We found that the stations not connected to the kiosk need to feature attractive, salable dishes so that the overall traffic in the cafe is better balanced between all the stations,” Folino says. “We also created a specialty item of the day for each concept. That tends to be the most popular item sold, so as more people gravitate toward that dish, we can prepare parts of it in advance and complete orders more quickly.”

Folino also install a high-speed panini press to move sandwiches through the deli more quickly and move staff around to help cover parts of the line that needed extra hands.

“We had to reallocate staff and become more productive with how we run the stations,” he says adding that the kiosks—as well as a major renovation of the café and kitchen—has led to a 78 percent growth rate from 2014 to 2016.

While speed of service has increased substantially, the kiosks have also helped to control food costs.

“Let’s say a doctor comes through the line and orders and Waldorf salad,” Folino suggests. “He might ask for extra walnuts or extra cheese. The person behind the line might not feel empowered to upcharge them, but by ordering through the kiosk, the system does it automatically so it’s helping to control our costs without affecting our customer service.”

The kiosk’s software—which is made by a company that specializes in self-order technology—had to be integrated with OSU’s cash register systems, which took a few months to accomplish. But once the interface was built, it was relatively plug and play.

“There was a great deal of upfront work on our part in getting all the items and possible modifiers into the system,” says Folino, adding that OSU uses a four-week menu cycle to keep the operation’s offerings fresh for repeat customers. “Once that piece was completed, it’s been intuitive for both staff as we add new dishes and customers as they become more accustomed to ordering through the kiosks.”

The screen offers prompts to guide a customer through the decision-making process and front-line managers also walk through the café to help anyone who might need extra assistance.

“From a technology perspective, we insisted on being extremely thorough with PCI (Payment Card Industry) compliance and security,” Folino adds. “We’ve also had to change the way we approach menu rollouts. We went from using a chalkboard and a whiteboard to needing a high-resolution, photo associated with a detailed menu description and nutritional information for each new dish.”

Despite these hurdles, the kiosks are proving hugely valuable, and OSU now has its eyes on the future with plans to roll out kiosks in other parts of the operation, like in its family waiting room.

“This fall, we’ll offer a limited menu via kiosk to families who don’t want to or simply can’t leave the waiting room,” Folino says. “They’ll be able to place an order into the cafeteria and we’ll have a staff member deliver it directly to them on a set schedule.”

“The kiosks we have and the ones we will have allow us to serve more customers, faster and better customize each dish,” Folino says. “We are seeing $5,000 per day in revenue from our kiosks—and that number continues to grow.”