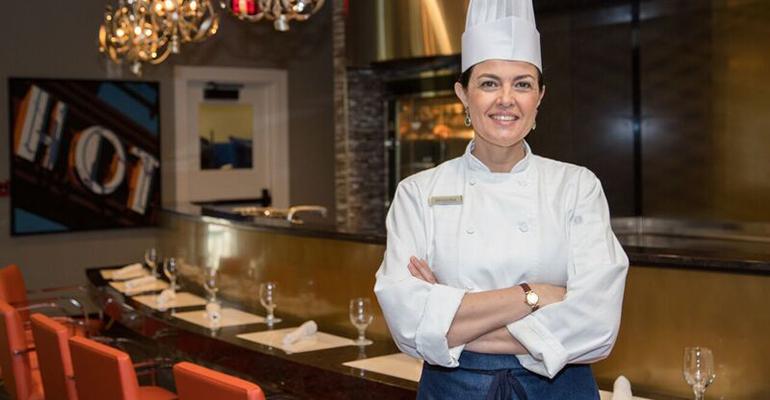 At one of Florida’s premier senior living communities, Executive Chef Begoña Lluch, is blazing a trail for menus that bring vitality to residents, combining the best parts of kosher, macrobiotic and Mediterranean diets.

When Begoña Lluch first came to the U.S. years ago, it was to accompany her father to a top cancer hospital in Houston, where the family shuttled back and forth from Spain for five years.

In Houston, Lluch met a hospital dietitian and learned to cook cancer-fighting food for her father. Although Lluch’s background includes training at the Cordon Bleu in Paris, gaining inspiration from Ferran Adria and the culinary scene in early 1990s Spain and has worked in prestigious French restaurants, this was an aha moment for her in terms of the connection between food and wellness.

“That was the first time I realized it’s not just that the food must taste good and have good quality and presentation,” she says. “There’s something more. You need to not just see one part of the person.”

Lluch creates menus by taking the best healthy aspects of several diets that are known to help people live longer: the Mediterranean diet, the macrobiotic diet, the anti-cancer diet and the kosher diet. She also helps them incorporate habits from the Blue Zones, areas of the world known for people living longer, healthier lives than is the norm. 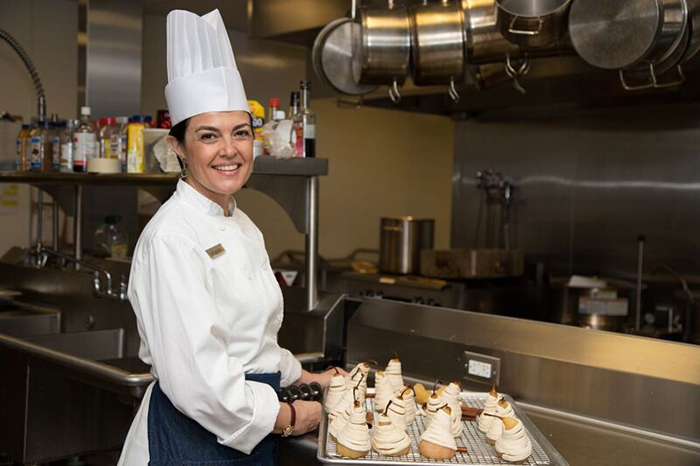 Many residents also follow gluten-free or dairy-free diets, and just about all the food is low in sodium, but with all the customization happening, Lluch keeps her focus on the emotional part of eating and how it relates to those in their golden years.

Most residents at MorseLife are Jewish, and about 20 percent keep kosher.

“Traditional food for them is slow food, European. Every day we have matzoh ball soup and brisket and beautiful latkes with applesauce,” Lluch says. “They love to eat this food. We try to keep them happy ,but we’re also making a balance between their health and their traditions and memories. We want to give them a lot of variety in their diet.”

The kosher diet—some say it’s one of the oldest instances of mindful eating—has many health benefits, spirituality aside. “In some instances, it has similarities with the Mediterranean diet and the macrobiotic diet,” Lluch says. “Because kosher food is part of their culture and their tradition, they naturally follow some very healthy diets.”

When creating a plate for the main dining room’s menu, Lluch goes by a formula she’s developed to increase wellness from a perspective of proportions on the plate:

“These four groups of food, combined in such proportions, should be a compass….a constant reference for a healthy diet,” Lluch says. “From a macrobiotic point of view, these foods provide our bodies with an alkaline environment in which our cells and muscles are full of oxygen. Oxygen is crucial to life and the vigor of our cells. A deficit leads directly to disease.”

Another aspect of the macrobiotic diet that’s great for nutrition is the seasonal aspect. Lluch takes pride in using as much local produce as possible and as few processed foods as possible.

Keys to a longer life

As for the residents in Levin Tower, Lluch has worked to instill habits that put them in line with those who follow a longevity-enhancing diet, such as:

• Getting exercise (Plenty of activities abound for residents, Lluch likens the community to “a cruise ship on land”);
• Leaving food on the plate. “They do not continue to eat once they are full,” Lluch says;
• Plant-based foods are the predominant choices for meals: legumes, whole grains and vegetables with a little bit of lean, low-fat animal protein on the side; and
• Moderate consumption of wine during meals and social events (social life and sense of community have been linked to longevity in many studies).

New plans on the horizon include doing more with fermented foods and algae, Lluch says, and also opening a fast-casual venue that will cater to a common senior craving: sweets (but healthier).

Café Como, which will offer dine-in or grab-and-go styles of dining, is slated to open this summer with healthful options like fresh juice, soups and salads. Desserts will be available in sugar-free options.

“When you get older, your palate changes and there’s some things you don’t taste anymore,” Lluch says. “They want sweets because they can really feel the taste. So this matches with my philosophy of giving them the best product possible and as fresh as possible without adding too much sugar. When a beautiful lady who’s 95 years old ask how many calories is in a dessert, you have to tell her. For them, it’s really important to feel in control of their diet.”

Lluch is looking forward to the new developments, as Levin Tower grows closer to its capacity—about 300 residents—and working with her team.

“I have people here who have been at the top places in fine dining and now they’re using their background here,” she says. “You’re not just cooking food here; you’re taking care of somebody. I think this job attracts people with humanity and love about what they’re doing.”