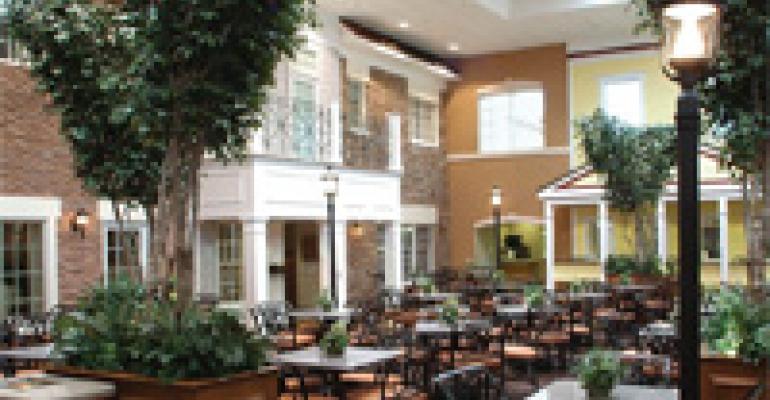 Choice and flexibility are the watchwords in the retirement communities of today&#8212;and the future.

What they eat, where they eat and when they eat matter to residents in senior dining situations more than ever these days. Research increasingly shows that after the quality of care, seniors investigating retirement communities and continuing care facilities want to know: “How's the food?” Amazing food — not just the same old comfort food — is expected.

“There is a big shift,” says Ron DeSantis, CMC, project director of CIA Consulting, The Culinary Institute of America. “Today, with the advent of celebrity chefs and food TV, plus more travel, people don't want to have boring, uninspiring food in their later years.”

The cavernous formal dining rooms of the past are being edged out by smaller, more casual bistros and cafes. Beyond the main dining room and the casual bistro, a wide range of “third places” is emerging on these campuses — everything from sleek bars, to ice cream parlors, to coffee shops and even freestanding restaurants that are open to the public.

Serious chefs fresh from culinary school or the restaurant world are creating exciting menus using local, organic ingredients and offering wine pairings. Residents are getting to know the chefs and staff and are ordering calamari while surfing the Internet on their laptops from a wireless connection.

As Michael Smith of ACTS Retirement-Life Communities Inc., says, it's now about the “total dining experience. Food is one of the main reasons people may or may not choose a facility.”

Today, the residents in retirement communities are expecting more out of the dining experience than ever before. The ‘Silent Generation,’ (people who are roughly between 75 and 85 years old) are very different from the generation before them.

“When you think about what it means to be 75 years old, that's Clint Eastwood. That's Joan Rivers,” says Schelley Hollyday, vice president, Senior Living Business Development, Horizon Software International, LLC. “People of that generation are saying, ‘What do you mean I have to put on a jacket at 5 p.m.? I want a panini at the grill.’”

The Baby Boomers aren't there yet, but their parents are, and their influence is there, too. Boomers are being marketed to indirectly, as they are often the ones making the decisions (or at least having input) as to where their parents will live. For more generational information about senior living, go to www.food-management.com/business_feature/fm_imp_9203/index.html

Stepping away from the old school

Cheryl Torre-Rastetter, director of dining services at Providence Point, a continuing-care retirement community in the South Hills area near Pittsburgh, PA, has 25 years of experience in dining services for seniors.

During that time, she has seen the attitudes towards serving seniors change.

“The more casual venue is often the one with the highest volume in many communities,” Hollyday says, going on to describe what might make up a day of eating for a typical resident. (For examples of this "casualization" of the senior dining environment, click here)

“Perhaps they'll go to the café in the morning and have a yogurt and bagel,” she says. “They might have a cheeseburger and a beer in the grill room later. The next day, maybe it's a seafood special or a theme night in the main dining room.”

New software is enabling meal plans to offer more choice and wiggle room for seniors. “Before, you may have used up a meal credit with just soup and a sandwich. And then you'd see the guy down the table having a double pot roast. You'd feel cheated,” Hollyday says. Today, many plans offer declining balances instead.

“The new generation coming in is saying, ‘Don't tell me how to spend my money,’” says Curt Seidl, vice president, Culinary Support, Morrison Management Specialists, which contracts with about 370 retirement communities around the country.

Having a meal plan with flexibility is proving to be much more satisfactory to residents, Hollyday says.

At San Joaquin Gardens, an ABHOW retirement community (a Sodexo account) in Fresno, CA, the flexible meal plan's name says it all. It's called “My Choice,” and all items are priced retail.

From a chef's point of view

When young chef Joel Hetrick's chef buddies come visit him at the Classic Residence by Hyatt, Glenview, IL, sometimes they'll register surprise that senior dining means working with the best ingredients, a great kitchen and the latest flavor pairings. Not, as the old stereotype would suggest, “a run-down old folks' home,” says Hetrick, CDM, CFPP, sous chef at the Hyatt.

Hetrick is an example of a trend many directors report: that retirement communities are being seen as more desirable places to work. Serious chefs are migrating to them from restaurants, resorts and country clubs. A big positive is a more family-friendly lifestyle and hours. Plus, many chefs find senior dining to be on-trend and cutting edge.

“What we do here is often a couple months ahead of what chefs are doing downtown,” Hetrick boasts.

One reason, he says, is that senior dining menus increasingly require chefs to experiment with flavor profiles. The challenge is creating flavor without falling back on chefs' favorite old stand-bys: butter, salt and fat. This leads to an intensely creative pursuit of flavor via fresh herbs, spices and a lot of times, what turns out to be more interesting ingredients. Chefs who serve seniors see this pursuit of flavor as a badge of honor; not taking the easy way out with a stick of butter, but making fresh, vibrant food day in and day out.

“Retirement communities are strengthening and investing in their chefs' cookery skills on an ongoing basis,” says Ron DeSantis of the CIA. “This is resulting in more interesting menus, and these days, graduates and experienced chefs alike are finding these are great places to work.”

These challenges and rewards present an opportunity that many chefs, fresh from culinary school, are looking at first, not last. Training programs for cooks at senior living facilities are getting more advanced, and many would-be chefs are washing dishes right now. Once a line cook takes the initiative, many chefs say, the sky's the limit.

Earlier this year, Hetrick was one of 16 chefs from across the country selected to participate in the Culinary Enrichment and Innovation Program (CEIP), a partnership between The Culinary Institute of America (CIA) and Hormel Foods. The topic of Health and Wellness was an important focus in this culinary leadership program.

“The first class focused on flavor dynamics,” Hetrick says, adding that alternate sources of flavor are an important part of creating meals for the elderly. “For senior dining, we use less salt and butter and cream. We try to develop higher-profile flavors.”

The chefs focused in on the sources for some of the brightest flavors, like cilantro, cumin and citrus. They listened to nutritionists speak on sources of vitamins, including colorful options like dark leafy greens and orange fruits.

Waking up the taste buds

Often seniors' palates often aren't what they used to be. Flavors can get lost, and sometimes a piping hot bowl of soup will be sent back with the admonition: “It's not hot enough!”

When a senior — or anyone — eats a meal, they should first notice great food, “and then we'll point out, ‘By the way, it's really good for you,’ not the other way around,” DeSantis says.

Meals to look forward to

Ask any chef who cooks for seniors: meal times are truly markers in the day that they look forward to and anticipate.

Many chefs say special themed menus for holidays, or just to highlight certain foods or seasonal flavors are a great way to create something that residents can anticipate, making days at the retirement community brighter.

The Chef's Table, a real foodie experience at the Hyatt for the past three years, is certainly something to look forward to in the realm of eating-as-entertainment for seniors. Fifteen lucky residents are chosen at random to enjoy a five-course dinner, complete with wine pairings. Last month, the Chef's Table menu featured Black Bean Glazed Quail with apricot chutney, bamboo rice and roasted cashews; Foie Gras Napoleon over Honey Crisp apples; Australian Hamachi Carpaccio (paired with a nice Riesling); Lamb Loin wrapped in La Quercia Heirloom Prosciutto.

“That's our fun time,” Hetrick says. “They love it. They'll rave for the next couple of days, and sometimes, if it's really good, for the next month!” Hetrick has received thank-you notes that have warmed his heart, he adds.