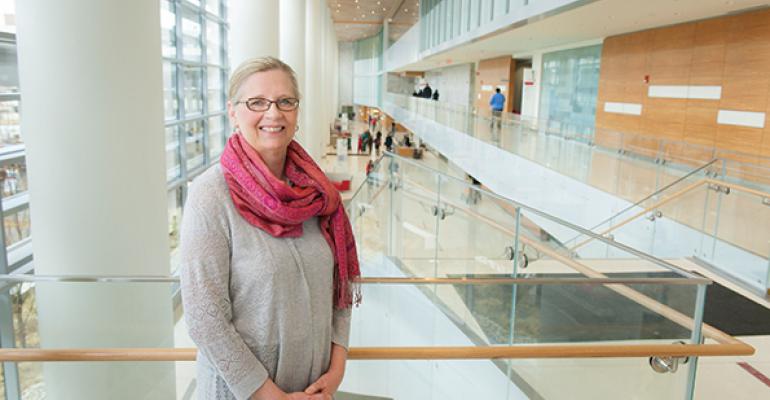 Since Julie Jones,  MS, RD, LD took over direction of dining operations at OSU Wexner Medical Center in 2004, meal volume has increased by almost two thirds, to more than three million a year in 2014. That includes a 70 percent jump in retail transactions, to nearly 1.5 million, something which helped grow retail revenues from under $3 million to over $5 million in the same period.

Those numbers didn’t just happen. Policies, improvements and initiatives championed and pushed by Jones made them happen.

Among the changes and improvements Jones initiated were a new central production kitchen, a dining on demand patient dining system that efficiently serves Wexner’s massive 1,500-bed/six-hospital complex through an innovative network of satellite finishing kitchens and the expansion of retail operations from two to 11, including a new preorder kiosk option at one site and a new sit-down restaurant at another.

Those are just the highlights. In between there are all the side issues and implications associated with these projects: maintaining meal service through a massive overhaul of the dining infrastructure; dealing with inevitable delays, midcourse alterations and snafus; and guiding the dining department’s 300-plus staffers through the incredibly complex set of changes, which included a wholesale revision of tasks, responsibilities, assignments and deployments.

Any wonder Jones was chosen to get the 2015 Silver Plate in Healthcare Foodservice?

It’s been quite a ride for Jones from her small-town roots in Celina, Ohio.

While enrolled at Ohio State University working on a degree in dietetics (her career test suggested either dietetics or...accounting!), Jones got a job with a small community hospital where her boss, Lynn Wilkin—an early mentor—told her, “Julie, you’re going through a clinically oriented dietetics program, but I think we want to show you foodservice as well.”

“It was a great experience as I got a little different perspective,” Jones recalls. “Lynn made sure I saw both sides of dietetics, not just clinical.”

After she graduated, she returned to the same hospital. A few weeks later, her boss left and Jones became director, which allowed her to gain valuable experience on both the management and clinical sides of her profession.

Two years later she returned to Ohio State to get her graduate degree and took a position at the medical center as a 50 percent staff dietitian.

“At the time there was a clinical nutrition manager position that was coming open and they said, ‘Julie, we see that you have management experience. Would you be willing to consider that?’ So that was sort of my route into management here at Ohio State, though not foodservice management.”

In January 1992, then-director Mary Angela Miller (herself a Silver Plate winner in 2008) pulled Jones aside and asked her to join the leadership team she was assembling on the foodservice side.

As associate director over the next dozen years, Jones wound up managing in just about every area of the department, giving her tremendous experience for when she finally took over as director in 2004.

Among her many other duties as associate director, she was in the thick of integrating dining operations at two acquired hospitals and two new hospital openings, upgrading back-of-the-house and POS systems and converting to Wexner’s automated vehicle (robot) delivery system.

When Jones took over the directorship in 2004, Wexner’s dining operations were at a crossroads. “The organization was growing beyond its boundaries and had to put a lot more things off site because it couldn’t house them here any longer. They moved over 700 employees almost two miles across campus and we had to figure out how to feed them. They also started growing outpatient sites in about a six-mile radius of campus.”

Among the solutions was a micromarket that serves as the off-hours foodservice outlet at one site. Opened six years ago, it was one of the first operating examples of this now fast-growing trend.

Undoubtedly, though, Jones is most known for the conversion of Wexner’s patient dining operation from its traditional cook-chill/retherm approach with set meal times to a room service-style on-demand system for up to 45 different units across a massive, sprawling system.

“We were in pilot at least three years while we were planning our renovation schedule, looking at different approaches to see what we would need from both the technology and service model perspectives.”

The distributed hospitality center model that emerged from these pilots overcomes the structural and operational challenges. “We have around 1,300 beds here on the main campus and another 200 at University Hospital East, so doing room service from a central kitchen just wasn’t going to work,” Jones says.

Along the way, Jones also upped the culinary culture. Most of the food is now made from scratch, and the number of chefs has grown to 30.

Another challenge was to avoid the labor cost involved with a call center-based room service model. The high-tech solution: iPad-based bedside ordering by nutrition aides (in the newly opened tower and a couple of other locations, patients can do their own ordering from in-room tablets).

The renovation schedule extended from September 2012 to September 2014 in a 22-phase series of domino moves encompassing both patient and retail dining.