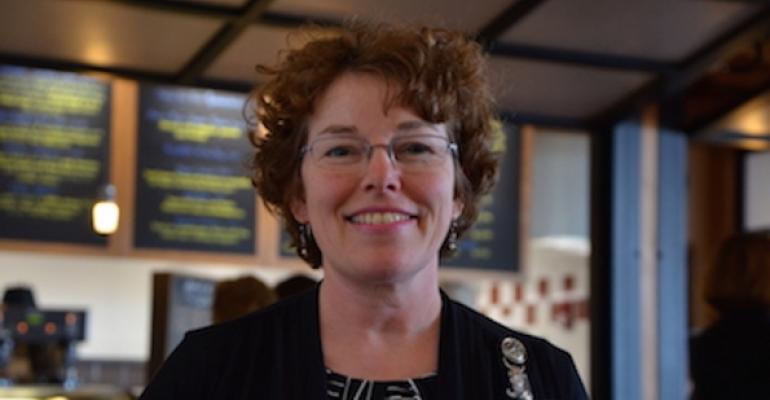 Bring your passion to the job advises the 2016 Silver Plate winner in the healthcare segment.

Diane Imrie is one of the pioneers in bringing sustainability issues to the fore in the healthcare foodservice segment. Her operation at Fletcher Allen Health Care (now the University of Vermont Medical Center (UVMC)) was one of the first to sign the Healthy Food in Health Care (HFHC) pledge back in 2006, and today it remains one of the leading programs in the segment at meeting HFHC’s goals.

Imrie was born in Montreal and attended McGill University, earning a degree in dietetics. A job as supervisor in a long-term care facility while going to school sparked an interest in a managerial position in the industry, and after graduation she applied for a job opening at Fletcher Allen because “I always wanted to live in Vermont,” where she had spent considerable time camping while growing up.

She’s been there now for more than 20 years and has been director for 19.

As for signing the HFHC Pledge, “I’ve always been interested in the food and health relationship,” Imrie offers. “Then I began learning about the environmental impact and other things that come along with our food, as well as the health impact, and I thought, ‘We have a real opportunity to change how things are done.’”

One of the major landmarks to making good on the pledge was a three-year plan developed in 2008 to reduce nontherapeutic antibiotics in the foods the hospital purchased. Today, 90 percent of the pork and 80 percent of the poultry, dairy and beef purchased by UVMC meet its antibiotic-free criteria.

Meanwhile, organic products are emphasized in procurement relationships. One particular success in this area is eggs, of which 75 percent are now organic.

UVMC also helps local suppliers grow by using its considerable financial resources to nurture those that can then meet its needs for specialty and locally produced products.

For example, it is prepaying some farmers to give them up-front capital for planting. That enabled one to build a new biomass-heated greenhouse that now supplies UVMC locally grown greens in the winter. Another advance payment deal with a nearby poultry farmer allowed the farmer to purchase 25,000 chicks at a lower price. “They’re not all for us, but it allows them to get some efficiency on their purchasing program,” Imrie explains.

An initiative to source peanut butter that doesn’t contain high fructose corn syrup led UVMC to a local company struggling to set up production of individual packets of the product, “so we made an arrangement to buy 100,000, which was their whole run,” Imrie says.
“We’re refining our program now from [volume items] like meat, dairy and cheese to smaller things like local oils and peanut butter,” she explains.

Imrie has also led UVMC to involvement in various community outreach efforts such as cooking classes and demos. Recently, it was invited to be part of a two-year national teaching kitchen collaborative with the CIA and Harvard Public Health.

It is also in its fourth year on a healthcare share program that allows patients at four primary care sites to get free CSA (Community Supported Agriculture) farm shares for 12 weeks in the summer, even including a couple of locally raised chickens. “They pick them up once a week at the doctors office,” Imrie explains, “and when they do we have nutrition information and a mini demo on how to use the products there for them.”

In the planning stages is a veggie prescription program that will allow pediatric patients from impoverished families to get free fruits and vegetables at local grocery stores and farmers markets.

Every retail location at UVMC has had at least one renovation in the last dozen years, with the highlight being the opening of Harvest Cafe in 2009, which Imrie says was intended to be “the most sustainable healthcare café in the country.”

Harvest Cafe served as a model for future projects with its emphases on waste reduction and menuing of healthier products and its cook-to-order approach.

More recently, the Garden Atrium, which opened last fall, puts an accent on locally produced ingredients, including those from its attached rooftop garden.

One unmistakable sign that Imrie’s program is working is the number of customers voting with their feet at UVMC’s retail operations: “About 14 percent of our patrons in the retail area have no other reason to be here [i.e., they are walk-ins],” she reports. That was measured before the hospital’s popular new Garden Atrium opened, so it’s probably even higher now, she guesses.

But the major impact that her program has been on UVMC employees, many of whom eat 10 meals a week from onsite dining outlets. “And it’s healthier food, which is the cheapest health insurance,” she notes.

How do you manage the cost impact of the premium products your program purchases?
“We benchmark very strongly. We’re highly productive on the staffing side and we’re very good negotiators in terms of our contracts. And as we’re a network now [as of 2014, UVMC officially became part of the University of Vermont Health Network] I’ve been working with my colleagues at the other organizations. We now have networkwide agreements with many of our vendors and that really helps on the financial side.

“We’re also really creative in menu mix and product selection, and we really pay attention to those kinds of details. And then for certain things, if they’re not important to us, we go with the cheapest. But usually it’s a matter of how can we save some money over here to get that meat that we want to offer over there.”

What’s the biggest lesson you’ve learned in your career?
“I think it really takes culture change. I think the biggest lesson I’ve learned, and I think I just absorbed it over time and didn’t really understand it right away, is that as we made the change to healthier food and higher quality food, it has allowed our staff on the front lines to feel like they’re really connected to the mission of the organization—it’s just part of our fabric now. And I think that wasn’t always the case.

“So now, if we tried to serve something that wasn’t particularly healthy, we’d get called on the carpet for that [by our staff].”

“For example, when we implemented the healthcare shares program, I overlooked—or didn’t give enough consideration to—the person who worked at the front desk of the clinic. She did not at first understand what was going on, did not understand her role, as we probably didn’t talk to her and involve her as much as we could have, and we missed an opportunity because she was a big cheerleader out there.

“The unintended consequence was that having her as a cheerleader got other employees at that clinic interested and involved. So if we had been more thoughtful—not that it was a bad outcome, it was a great outcome—but it could have been even more fabulous.”

What is the biggest challenge for healthcare foodservice going forward?
“I think we are now in a place where we who are food and nutrition experts are going to be called upon to lead many new initiatives in the world of population health management, and I think the challenge going forward will be to [remember] our priorities and realize that we still have to run the shop!

“So one of the things I’ve been thinking about is how am I developing the team so that we have more depth? We’ve done a lot of work in that area, and that has allowed us to start all these [outreach] programs and still manage to run the shop.”

The greater emphasis on scratch cooking and a more culinary approach requires more staff expertise. How difficult is that to satisfy?
“The recruiting for that has been challenging. Our executive chef [recently estimated] that over a third of our line chefs have a culinary degree—and we’re trying to increase that—but the market specifically in Burlington [is at about] zero percent unemployment for line chefs.

“Still, we do have lots to offer. We have a decent schedule. You get to do cook-to-order, you get to develop your own menu items, you get to work with real high-quality food. So we’ve got lots to offer. It’s just getting the word out and making sure people understand what the values are here.”

Is an emphasis on more local, sustainable and natural products going to become the standard in healthcare foodservice going forward?
Oh, yes, this is the standard. I believe there’s not any going back.

At some point it becomes a competitive issue…
Exactly, and we’re starting to see that in the industry. It’s just the new norm.

What advice would you give to someone coming into the healthcare foodservice industry?
“I didn’t come into it thinking this, but my advice is, bring your passion to work every day and don’t see the limit. Make it your own. Find your own place at the table and make it your own program.”