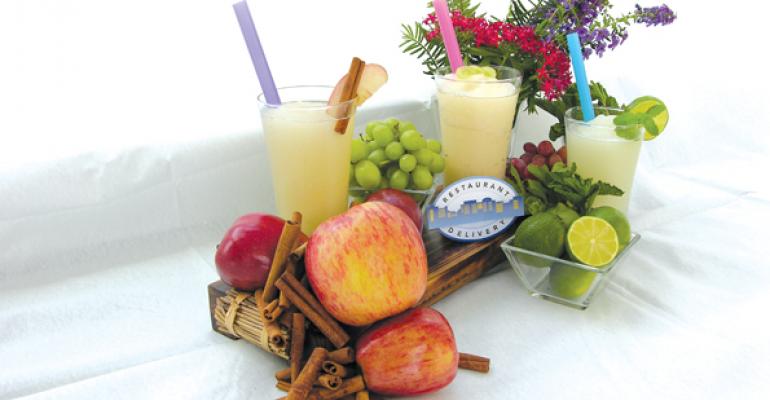 Imagine a liquid diet product on a hospital patient menu that is ordered by patients not on liquid diets. That is the situation at the University of North Carolina Health Care where a newly formulated clear liquid smoothie has broken out from the liquid diet niche to a broader fan base, including nurses.

The innovation is the result of Food & Nutrition Services Director Angelo Mojica’s frustration with the traditional juice/Italian ice regimen given to patients coming off surgery or having dexterity issues. “Picture an 80-year-old just out of surgery having to peel off the cap and scrape away the ice on one of those things,” he says.

The challenge was to find a product that would reduce the sugar but still be freezable, and which holds up when it’s on the patient tray.

In technical terms, that means a product with a “Brix” level of at least 13 (Brix is a term reflecting the sugar content of an aqueous solution). “Actually, what we came up with has less sugar than the Italian ice we were serving before,” Mojica says.

Flavor choice was governed by two goals: one, no red (spillage could be confused with blood on a patient just out of surgery) and second, it had to taste good.

The team settled on an apple juice flavor after several other possibilities had been discarded—“and it tasted the best of any of them!” Mojica says.

“The first time I tasted it I thought, ‘if this had cinnamon in it, it would taste just like apple pie. So they added cinnamon extract to the recipe and today it is on the menu as Apple Pie.”

The smoothies are served in 12-oz. portions, which pleases nurses who want patients to hydrate after surgery. This also helps the transition to more residue-heavy smoothies like strawberry and banana.

“It’s been very effective in the ICU,” Mojica says. “We’re doing about 150 a day. Our nurses have been so enthusiastic that they are even encouraging patients on regular diets to order them and asking about the possibility of putting them on the retail menu!”

So now the formerly specialty drinks are going on the regular menu, especially in pediatric units—“Imagine a child being offered an apple pie smoothie,” Mojica says.