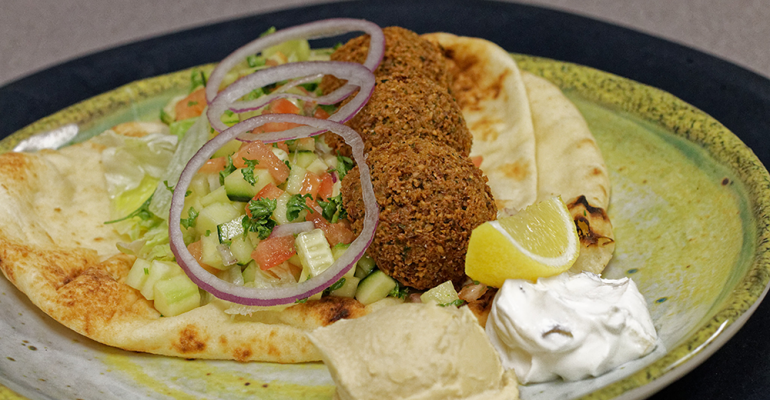 Stories from the front lines: How healthcare chef stays ‘in the zone’ on cooking for wellness

Nazim Khan, executive chef at Bryan Health in Lincoln, Neb., became a student of the Blue Zones diet for health, happiness and longevity, planning to make it a big part of the menu. When the pandemic hit, Khan doubled down on his focus and is on the verge of introducing a comprehensive, research-based way of eating to the hospital’s patients, staff and visitors.

Nazim Khan, CEC, WCEC, is executive chef at Bryan Health. Throughout Khan’s culinary career, his interest in food as medicine—and a recipe for a long, healthy life—has grown exponentially. Now, working in the healthcare field, his vision has become clearer than ever in a time when wellness has become a real public issue like never before.

Food Management spoke with Khan on June 18 about formulating a new menu—and food philosophy—based on the foundations of the extensive body of research done on the Blue Zones. These zones are parts of the world where people live markedly longer and healthier lives. The commonalities in their diets and ways of eating are what Khan’s digging into as he creates a new menu, which naturally showcases his big-city chef skills on flavor presentation and that certain je ne sais quoi that makes even carnivorous customers line up for lentil bowls, Beyond burgers, tofu tikka masala, plant-based tostadas and more.

Here is his story.

“My whole game plan for the past five or six years has been regarding the Blue Zones. Dan Buettner [National Geographic Fellow who studied the lifestyle and environment of the Blue Zones] writes about it. He found five places around the world—Okinawa, Japan; Sardinia, Italy; Nicoya, Costa Rica; Ikaria, Greece; and Loma Linda, Calif.—where people are living so long, and I said, ‘This is really cool stuff.’ 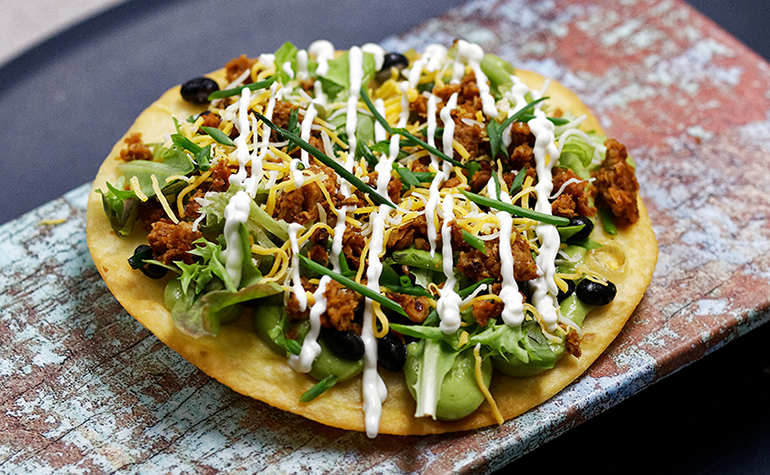 “But when I first came to Bryan Health there were so many other culinary culture things to change first. Getting more into scratch cooking, the storeroom, the freezer, there’s so many parts to it…it’s taken me about four years. So now, I said, ‘Let’s do the Blue Zones, but let’s do it with a bang.’

“I’ve been featuring more plant-based food up until now, seeing how people react to it, and they’ve been lining up for it. Plant-based is going great, so I feel ready to launch our Blue Zones project. I really want Bryan Health to be a leading hospital in this lifestyle movement. Lentils, legumes, kale…all those things. When I go for it, I want to go full-blown. I’d like to collaborate with other hospitals on this, too.

“In the Blue Zones, they eat all the grains, legumes, fruits and vegetables…some fish, but not a lot of milk or meat. And it’s how they live; it’s not only about cooking or eating. There’s a community aspect. In Okinawa, they call it moai, a group of lifelong friends who share the love and the sorrow and the stories of their lives and their ancestors.

“And their everyday diets are so beneficial. I was so fascinated to see a YouTube video where a doctor from Germany last year went to Sardinians who were 100 years old and took their blood samples. There’s some sort of protein that other people don’t have, where a 100-year-old’s blood is similar to that of a newborn! Is it the lifestyle, the weather or maybe the rosemary?

“Another element of the Blue Zone diet is they don’t eat non-seasonal food. In Bangladesh, mango is my favorite food. In America, you can get it year-round, but it’s never close to that flavor when it’s truly in season. That’s one reason I know just about every farmer in the state. I go to their farms.

“I’m the type of person who always goes deep into research and then takes action. I’m not fooling around. The more I read, the Blue Zones made me change my own way of eating. Bangladeshi culture is already heavy on the lentils. Indian culture is all ginger and turmeric, but in the Mediterranean, they have other stuff like rosemary. Throughout the world, all the beneficial spices are split up. We’ve been making our own rosemary salt. The secret is to add maltodextrin so the rosemary doesn’t get soggy and clump up.

“Basically, I’m getting the ball rolling. For example, customers really love falafel. I get dried beans locally and from a distributor. I soak the chickpeas overnight, then drain them. I chop cilantro and parsley—I hate curly leaf parsley and use only Italian flat-leaf—with a jalapeno and some of its seeds, raw onion and garlic, then combine that with cumin, salt and pepper and process it together into a paste. Dry chickpea powder helps hold it together. I form it into balls and put it straight into the freezer. We can pull it out from a frozen state, get it golden brown in a little oil and then finish it in the oven. The falafel is crunchy outside and soft inside. “It’s intense flavors and textures. We serve it from a chafing dish with naan, housemade tzatziki, a bit of hummus, diced tomato, red onion and a squeeze of lemon. It’s a killer meal. People are loving it.

“A work in progress for the menu is the shami lentil kebob, a patty with Indian spices blended with mashed potatoes, then dipped into egg wash and pan fried. I’m going to add gluten-free breadcrumbs, since I like to do most of the menu items gluten-free these days. We can serve the patties on pretzel buns with a vegan curry aioli.

“To change the culture and direction, you have to believe in it. Otherwise, you’re just doing a spot check here or there…you’re not fixing anything, you’re just duct taping.”