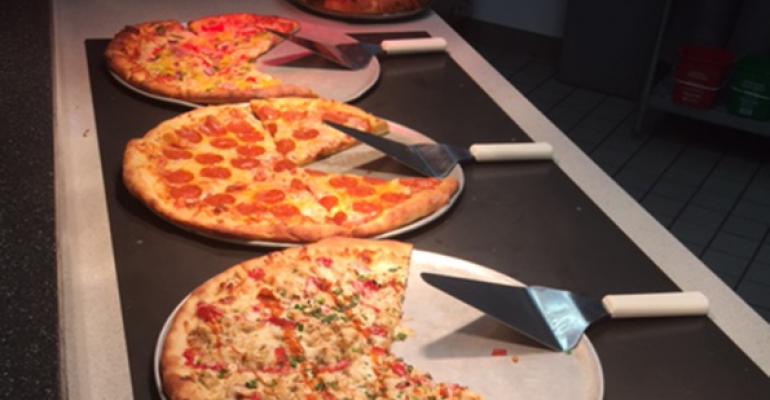 <p>SLICE OF HEAVEN: The retail pizza (pictured) was doing so well, take and bake was the next step. </p>
News & Trends>Healthcare

The new service makes the most of a missing daypart—the busy working person’s dinner rush.

In a show of business savvy and customer service, the culinary team at Rex Healthcare, part of the University of North Carolina’s health system in Raleigh, saw a niche that wasn’t being filled and acted accordingly. Busy hospital employees rushing out the door to get food onto their own tables were an underserved group. Enter take-and-bake pizzas.

Rex’s journey to a great gourmet pizza concept began a couple of years ago with a major upgrade. This included a switch from prebaked dough and generic sauce to dough made from scratch in a giant mixer and a sauce made from San Marzano tomatoes that was developed with a New York City pizza maker. “New York style, Carolina made” became the tagline for the hospital’s new pizza concept, Stevie Ray’s, which quickly started to gain fans.

Steve Pexton, chef manager, culinary & nutrition services at Rex, had laid the groundwork for this concept at a previous job.

“The development phase was easy for me,” Pexton says. “I had a ‘someday’ pizza concept on a thumb drive so it didn’t take long.”

The big mixer for the dough was the only piece of equipment that existed in the small kitchen back then, so a pizza prep unit with a built-in cutting board was added, along with a couple of compact countertop electric ovens with slate hearths that hold four pizza pies each. Signature pies began to take shape: Caprese, Hawaiian, Greek, Caribbean jerk, ‘shroom, Philly cheesesteak, carne (with sausage, pepperoni, bacon, beef and ham), cheeseburger, taco, Thai and more.

Stevie Ray’s NY Style Pizza was soon making 50 pies a day and up, chugging along just fine. At just under $13 per pie with the employee discount, these pizzas offer value that can’t be found in local gourmet pizza joints like Mellow Mushroom. (“I’ll put mine up against theirs any day of the week,” boasts Paul Berens, foodservice manager at Rex.)

But there was a missing opportunity.

“We wanted to reach another daypart,” Berens says. “People are working here all day and then go home. People with little kids and after-school activities, they’ll stop for gas, and by the time they get home someone has to go to T-ball practice. This way you’re taking it home, making it at your convenience and not settling for lukewarm, mediocre pizza delivery.”

Before the take-and-bake program launched a couple of weeks ago, adaptations to the pizzas were made. Dough had to be formulated with the right amount of yeast so it wouldn’t rise too much on the car ride home. Special pans that could go into home ovens were tested. In fact, everything was tested, starting with 30 pies going home with customers who took photos and recorded everything about their take-and-bake pizza experience from quality to time to correct oven temperatures.

Rex got free research and the test subjects got free pizza, creating a win-win situation.

The next step was making sure the take-and-bake pizzas were easy for all employees to order. There is a form to order on the hospital’s intranet, but some employees, like the housekeeping staff, aren’t on computers all day, so there’s a way to order on paper, by phone or in person. There’s a deadline each afternoon to order, but the pizzas can be picked up until 1 a.m., the end of the hospital’s third shift.

Kitchen staff prepares the take-and-bake pizzas throughout the day, something that helps fill up down time as well, Berens says. The sales are just starting to ramp up as word gets out (17 pies sold on a recent day), but feedback has been very positive.

Of the 6,000 employees, nurses at stations tend to be influencers when it comes to food, so getting pizzas into their hands has been effective.

“We got the buy-in through the nurses,” Berens says. “When they tried the pizza, they said, ‘Wow, this is really here?’”