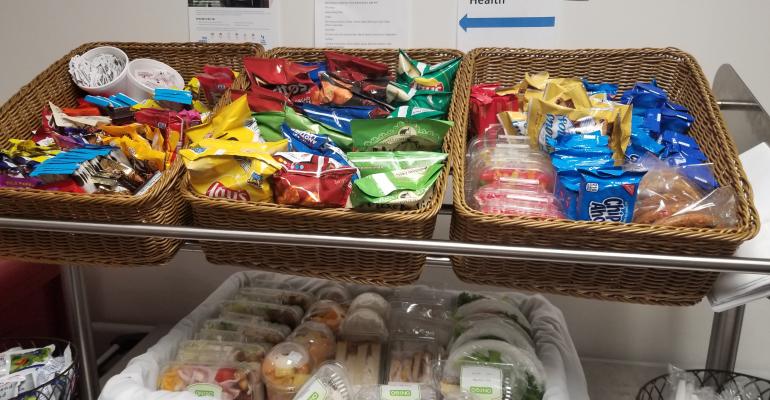 A fully stocked food cart featuring grab and go sandwiches and salads as well as an entrée of the day and assorted snacks and beverages mean increased retail sales and a huge boost in third-shift customer satisfaction for TouchPoint at Ascension St. Vincent's Riverside Hospital.

Third-shift employees in hospitals and medical centers traditionally have lagged behind their daytime peers in receiving onsite foodservice, often being limited to vending options, brown-bagging and takeout from nearby late-night service restaurants. In some facilities, limited-access automated micro-markets or even a limited café option where one or two stations stayed open for some extended hours were provided.

This underserved market may now get some more attention as healthcare facility foodservice programs look for additional revenue generating opportunities in the wake of the financial hit they took during the pandemic-imposed lockdowns and restrictions.

Related: Healthcare dining trending: How to offer gluten-free foods; one hospital preps for the future

One facility that has aggressively addressed this issue is the dining program managed by TouchPoint Support Services at Ascension St. Vincent's Riverside in Florida, where a fully stocked food cart sets up shop every night in a central location easily accessible by anyone in the sprawling complex. The cart isn’t just a mobile snack stop but one fully stocked with a selection of hot meal choices ranging from burgers and chicken sandwiches to an exclusive entrée of the day that is distinct from what was served to previous shifts earlier.

“We don’t want people to think they’re just getting lunch leftovers,” observes Chase Turgeon, senior executive chef at Ascension Riverside for TouchPoint. The menu is not on a restricted cycle either, as each evening’s entrée selection over the first 27 weeks of the cart’s existence has been different. For instance, one recent offering was fresh beef Bolognese over spaghetti with garlic bread sticks, followed the next night by blackened chicken with pumpkin risotto and chef’s choice vegetables, all for the employee price of $3.49.

The food is prepared by a grill cook who makes it fresh in the evening just before the cart rolls out. Turgeon says he will now start rotating back some of the more popular choices as the program continues. 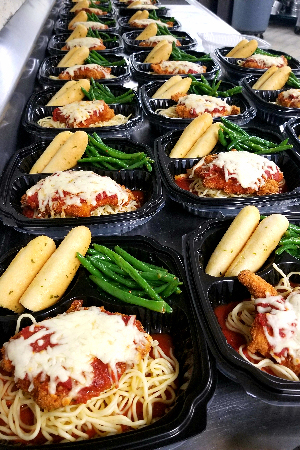 Photo: A hot entrée of the day is the centerpiece of the cart menu, with a different premium selection each night such as this beef Bolognese served over spaghetti with garlic bread sticks.

The menus are posted every week to the hospital’s intranet and the transactions are completely cashless.

“We were the pilot and the first one in TouchPoint to do Café Express,” Turgeon notes. “It lets everybody order from their phones, then show proof of purchase with their email receipt when they come down to get their food. There is a QR code on the cart so they can pay with their phone.” It doesn’t accept cash, checks or credit cards.

The mobile unit sets up outside a main elevator near the cafe, “so anybody in the hospital can come get it because they only have to jump on one elevator, take a few steps and the cart is right there,” Turgeon notes. The unit is manned by two dining associates and operates between 10 a.m. and midnight every night.

It is stocked each night with 25-35 hot entrees, 20 hamburgers, 20 cheeseburgers, 20 chicken sandwiches and a range of chips, snacks, candy, fresh baked cookies, house-made parfaits, fruit cups and an assortment of cold sandwiches, wraps and salads made in-house. The entrees are individually packaged in microwave safe plastic to-go boxes and the hot sandwiches in foil insulted bags, and all the hot choices are kept in an insulated hot box on the cart to maintain temperature. Next to the cart each night are insulated barrels containing sodas, teas, water and juices. 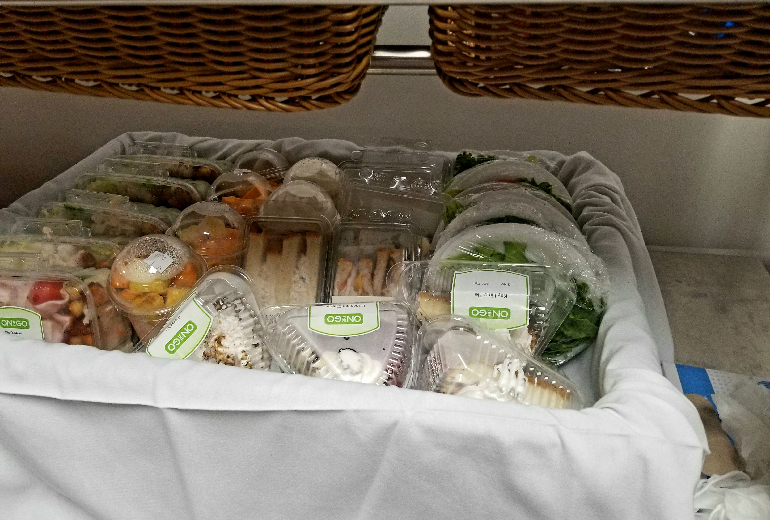 The cart debuted last December, the product of a request to upgrade meal service for third-shift staff.

“Nursing administration and the hospital president asked if we could think about something to do for the night shift, so I talked with our assistant director, Matt Tromba, and it kind of snowballed into this and really took off,” Turgeon notes. “People were really happy when we started doing it because for years all they had was Subway, and they were very tired of Subway. Until December, our foodservice closed at 6:30, so the third shift never had hot food options” other than Subway, which incidentally no longer stay open into late night, “so we get all the business now,” he adds.