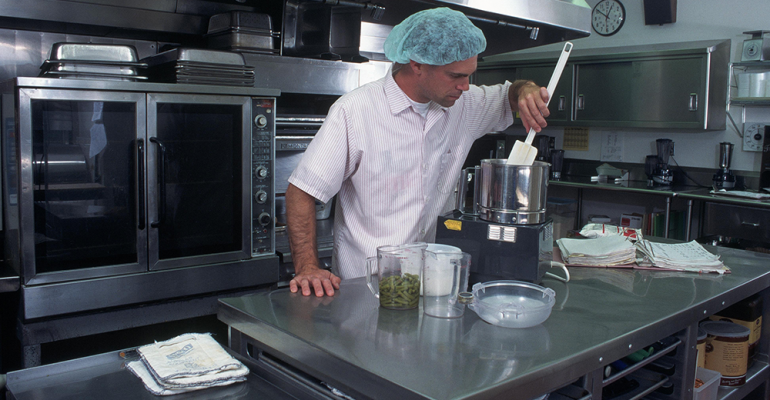 Matt Melone’s Cedar Rapids restaurant, Pig & Porter, was a success, but his professional life was lacking. The newly minted healthcare chef shares his perspective on a growing trend: Professional chefs making their way into onsite dining.

Here’s a career trajectory that’s becoming more and more prevalent in onsite food service: A chef who’s got chops makes his bones and strikes out on his own, maybe opening his own restaurant. Chef’s life changes, and the restaurant’s hours are all wrong for raising a family. Chef finds a new path in the onsite culinary world, something he never thought he’d do but turns out to be more fulfilling than he could’ve imagined.

That’s the Cliff’s Notes version of what’s been happening with Chef Matt Melone, who for several years was a locally known chef of his restaurant, Pig & Porter, a farm-to-table venue in Cedar Rapids, Iowa, with creative American fare, craft beer, whiskey and a patio. Prior to that, he worked at acclaimed restaurant Blackbird in Chicago. 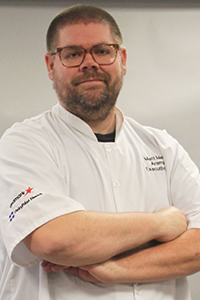 “There’s a reason you see this trend [of chefs switching to onsite dining] because we all feel that [opening a restaurant] is important and we all have something to prove with owning your own business,” says Melone (left). But he quickly found all that glitters in the notoriously tough restaurant biz isn’t gold. “People think if you own your own business you’re automatically wealthy, but it’s pretty hard to do.”

In addition, with a wife and two young kids, Melone was ready to get off the restaurant ownership merry-go-round.

“I owned my business and it actually went great, but I had to take a step back and say, ‘I’d like to be a husband and I’d like to be dad,’” he says. “I did a complete 180 and it’s not good or bad. I’ve always tried to put myself in uncomfortable learning positions, with people with Michelin stars and I’ve done all that stuff.”

The transition has also spurred Melone to personal changes, allowing him to “take a step back and not get caught up with the frivolous things…I have more time to take care of myself and eat properly…and get off social media.”

So now, it’s onto Melone’s next learning curve. The transition has been smooth, but not without a few “huh?” moments.

The biggest challenge for a chef coming from the restaurant world, Melone says, is “patient special menus. You can’t just season food so it’s the hardest thing ever. Seasoning food is probably the most important thing in cooking, and someone is saying you can’t do that! It’s like tying your shoes and having someone slap your hand away. How do I do this? In a job like this, I’m not going to be 100% comfortable until I’m here for at least a year.”

The hospital has just started a room service program and is in the midst of a kitchen renovation that includes shuffling cafeteria space. On top of all that, a new dining center opened in December, going from a 1950s tray line to updated stations, so “I came in at an interesting time,” Melone says. However, he’s confident about these changes, given his professional background.

“I’ve opened five restaurants, so I know how it goes,” he says. “There’s been menu planning and rotations, so we have some structure, but we also have the ability to make changes. That’s where I excel.”

For example, Melone has been gradually trying out more Asian dishes on the menu, like ramen, one of his favorites. He aims to make every menu item approachable to his audience.

“I’m really into ‘ugly-delicious’ food…things that don’t necessarily look appealing but are great, like a Thai noodle bowl with layers of flavor—salty, sweet and sour,” Melone says. “I want to talk about this stuff in a way that isn’t obtrusive or scary to people. My wife is a teacher and she always says it’s not what you’re saying but how you say it.” Or in the case of menu items, “how you present it. It’s about talking to guests and customers and getting them to step outside their comfort zone.”