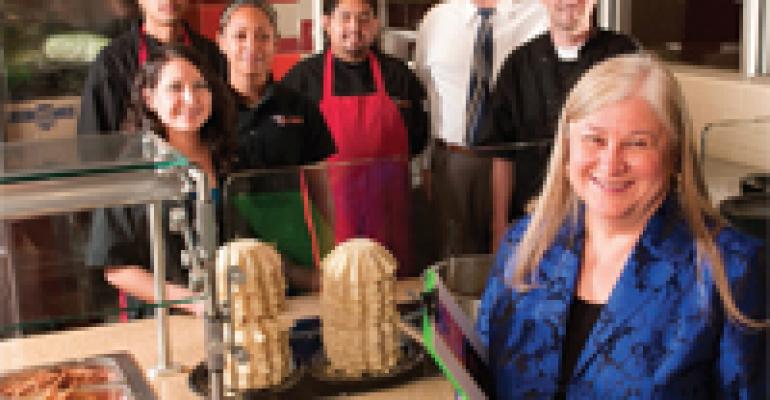 Room service dining is a sure crowd pleaser among patients. Ask most hospital foodservice directors who have chosen this path and they will show you impressive customer satisfaction increases that are the result.

But room service can come at a cost. It is typically labor intensive, sacrificing economies of scale for expansive menus and individualized service. And while reduced tray and plate waste can help compensate for that, it doesn't always.

That's what worried Laura Robson when the University of Utah Health Care's University Hospital in Salt Lake City began planning a major upgrade to its patient meal approach — including a possible move to room service — as part of the institution's $200 million West Pavilion project. Robson, director of nutrition care services for UUHC's University Hospitals & Clinics, had already endured one bad labor squeeze experience, and it wasn't something she wanted to repeat.

And she hasn't. While her department originally flirted with the room service model, it ultimately went in a different direction, a hybrid approach that has dramatically boosted patient meal service satisfaction scores while keeping labor costs in reasonable line.

Its solution: a “chef's choice menu” approach that simplifies meal prep by limiting the food options for patients, counterbalanced with individualized bedside service from dining representatives who take orders and then prepare the trays for their patients themselves. The meal trays are assembled in “pods,” tightly designed prep areas located in the hospital kitchen that maximize assembly efficiencies.

The patient meal pods are part of a revamped foodservice infrastructure at UH that debuted in mid-2009 with the opening of the West Pavilion (see sidebar on p. 22). The West Pavilion also houses a brand new retail cafeteria, which replaced an older one that had itself been renovated only a few years earlier.

It's all part of an eventful journey for UH's nutrition care services operation. Here's the story…

Until last year, UH's patient meal service was run out of a kitchen space built in 1965. In 1982, it was renovated to implement a new decentralized delivery system in which mass-produced meal components were cook-chilled to inventory, frozen and retrieved when they were needed for a cold trayline assembly operation. The trays were then rethermed on the patient floors using microwave ovens.

It was all very labor-intensive, a problem that worsened in the late 1990s, when the impending Salt Lake City Winter Olympics and a booming economy vacuumed up service workers, leaving the hospital scrambling for bodies.

A change had to come, though on a modest budget.

“We had limited funds, not enough to change the trayline area, so we decided to change to a system that would decrease labor at the delivery end but keep the cook-chill, cook-freeze and cold trayline operations intact,” says Robson.

The solution, a cart retherm system to replace the scattered microwaves, was implemented in 1997 and it cut patient delivery staffing by half. That approach remained in place while plans for the proposed West Pavilion began to take shape through the middle of the past decade. That project included a totally new patient kitchen and retail cafeteria in the new facility.

There were certain assumptions….

“We had a new CEO and a new COO. The first time I met each of them, the first thing they asked me was, ‘You're going to do room service in the new facility, aren't you?’” Robson recalls. “But I was never sold on it. I think in a hospital of this size, it would be a nightmare because it's so labor intensive and I've already been in that kind of situation.”

While exploring her options, Robson was introduced to the pod approach by a the consulting firm (The Hysen Group) engaged to work with the department on its new facilities. Curious about any alternative to room service, she and representatives from her team went on a site visit to tour a pair of hospitals with functioning pod-based patient meal programs. One of the representatives going on these fact finding missions was Gladys Adjei-Poku, the nurse manager for UH's cardiac unit, the one unit at the hospital that was then using a room service approach for patient dining.

Once she saw the pods in operation, Adjei-Poku was an immediate convert, and she urged Robson to give it a try (“In fact, she got real pushy about it,” Robson laughs). Robson agreed to conduct a pilot on Adjei-Poku's unit, where patient dissatisfaction with meal service was at a critical stage.

“We were having a lot of problems on our unit,” agrees Adjei-Poku. “We have a lot of patients going for tests every day, and when they came back it took quite a while to get meals to them with the room service. So I told Laura, ‘Let's remove that and find a way to improve the timeliness and also the temperature of the food,’ which also was very important.”

The results of the experiment were dramatic. The pod approach was kicked off in February 2009. By June, Press Ganey scores on patient satisfaction with the meal service had rocketed from the 4th percentile to the 93rd!

“From that point there was no question we could do this system,” Robson says.

Here's how it works.

The patient meal service system at UH uses a “chef's choice menu.” That's a meant-to-be-taken-literally way to say that it is the chef and dietitians — not the patients — who choose what will be served at each meal. Patients can opt out of the “chef's choice,” but that option is not advertised.

Most meals are served at the three traditional dayparts, unlike with traditional room service style programs, though late trays are available round the clock.

“We give patients the week's menu when they come in,” explains Robson. “Then, a team member checks with the patient before each meal to make sure the selection is okay. If it's not, then they give them some options we have instead. But that ‘secondary menu’ will never be put in print because it would soon turn into a room service menu, something we had between meals in our old system, and it was a nightmare.”

What compensates patients for lack of actual menu choice is the individualized service from the Nutrition Care Associates who consult with them on the meal selections. They generally work 10-hour shifts, with two typically assigned to each unit splitting the 70 weekly hours. On average, an NC Associate is responsible for 40 to 50 patients at a time and is expected to become familiar with them and their food preferences.

That familiarity comes into play in the kitchen, where NC Associates are also responsible for assembling the trays for the patients under their charge. This is done in the meal assembly “pods” located in the patient production kitchen (see sidebar on p. 22). The idea is that as the NC Associates get to know “their” patients, they can customize the trays they then deliver.

In each pod, a cook prepares and plates the hot food for two assembly stations. The NC Associates assembling the trays add sides, beverages, condiments and cutlery/napkins from racks and bins located within easy reach. Generally, one-and-a-half to two pods are active at each meal period, depending on patient census. An NC Associate assembles a minimum of one tray a minute.

The pods allow greater flexibility to deal with fluctuating patient census counts, Robson adds. “We can close down half a pod or a full pod depending on how many trays we need to assemble. With the old trayline system, we had to have five or six bodies no matter how many trays we needed to do, plus the NC Associates needed to deliver and pass the trays.”

And, she adds, should room service ever be mandated, the pod infrastructure is much more easily convertible to such a system than a traditional trayline based kitchen would be.

The NC Associates who interact with the patients also pick up the breakfast and lunch trays, pass the dinner trays and operate the afternoon snack cart, while a separate evening shift collects dinner trays, passes evening snacks and cleans up the kitchen at the end of the day.

Robson says the individual attention and close consultation leave most patients satisfied with their meal service. “I chuckle when I read some of the comments coming through,” she says, “because the patients will talk about how many choices they had, when in reality they don't have a lot of choices.”

The full transition to the pod system took place gradually in July 2009 with the opening of the West Pavilion kitchen. At first, only three units were converted.

“Our fear was that if we were going to transition everything at one time, it would take us forever to get through meal service and patients would be getting breakfast at lunchtime,” Robson explains. “It took a lot of labor because we were still running the old kitchen, where we needed to keep production staff even after the new kitchen opened. We transitioned the units slowly until finally, around the 27th or so of July last year, we moved everything else over.”

The gradual changeover also allowed Robson to rotate all her staff through the new kitchen. The big change, of course was for the seven to nine tray assembly staff who would become either a “pod person” or be reassigned to another area, and the 10 to 12 NC Associates who would be assembling and delivering trays to “their” patients.

Making the change easier was the fact that UH had adopted the Press Ganey evaluation protocol in 2005 because it wanted to increase patient satisfaction. “We started hiring people to work on the units who were customer-oriented, figuring that even if we had a production system that couldn't support higher scores in food quality and temperature, we could at least get higher scores for customer courtesy,” Robson says.

Those hires are a crucial part of the new system. As the transition progressed, others with a customer service orientation were added from the trayline brigade. Those who couldn't or wouldn't adapt simply dropped away, while others were reassigned to non-frontline positions, like the dishroom where a new focus on permanentware and the image it conveys about dining quality had also increased labor demands.

But the validation is in the numbers. The Press Ganey score for patient satisfaction with UH's meal service was in the 13th percentile in the July-September 2008 quarter. In that quarter of 2009, which coincided with the early months of the pod implementation, the score rose to the 58th percentile. This year, it was in the 93rd percentile.

Those eye-popping numbers have mollified any administrative concerns over labor, which increased nine percent with the implementation of the new system, a sharp deviance from the four percent cut the department was originally asked to make. However, that is still far under the 23 percent labor increase that Robson estimates conversion to full room service would have demanded in the Utah Health Care operation.