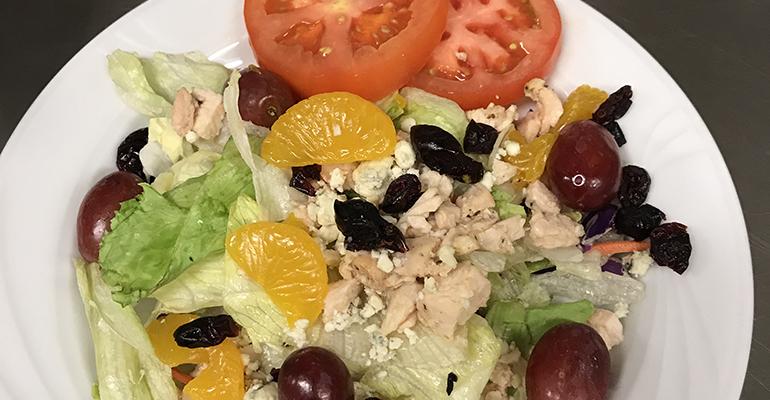 When one size doesn’t fit all

This Reno senior living facility customizes its menu based on resident feedback and recipes.

Opening a brand-new assisted living facility isn’t easy. So when Summit Estates Senior Living and Memory Care was preparing to welcome its first group of residents in 2015, staff leadership made a decision that—upon looking back—wasn’t the best idea. Rather than create a brand-new dining menu from scratch, the Reno, Nev., community would borrow one from its sister facility located in the nearby town of Fernley.

Originally, it was assumed that dining options beloved in one location would be just as popular with residents living elsewhere. But that’s not what happened. “To be blunt, it was a different demographic here in Reno,” says Administrator Amanda Jenkins. Popular salad made with tuna, orange segments, grapes and olives.

The menu at the Fernley location was geared toward its more rural residents. They loved the hearty comfort meals that harkened back to the 1950s and 1960s, like Spam platters, liver and onions and fried bologna sandwiches. But just 45 miles away at Summit Estates, those offerings weren’t working.

“They had different tastes here,” Jenkins says. Jenkins and Director of Dining Services Zareen Gul believe it simply had to do with what residents were used to eating before coming to Summit Estates. “A lot of our residents weren’t born and raised here. They might have come from places like New York or Los Angeles,” Gul says. And that may have shaped their tastes toward lighter, healthier fare.

Jenkins and Gul knew they needed to find a way to make their residents happy as complaints mounted. “Food is the last bit of residents’ control, so it’s a huge focus for them,” says Gul. “And they weren’t shy about sharing their opinions whatsoever.” So Gul began hosting monthly Chef Chats to find out more about what residents disliked—and what they wanted to see on the menu instead. Instead of processed and red meat, the folks living at Summit Estates asked for more vegetable-focused meals. Spam and fried bologna sandwiches were out—and veggie lasagnas, mushroom burgers and eggplant Parmesan were in. Gul added more fish and chicken entrees too, like salmon with caper sauce and Parmesan panko chicken.

Gul also began asking residents to share the dishes they used to make for themselves. “I was open to their recipes, whatever they used to eat. This is their home, not ours,” she says. Resident Marian Barnes shared a healthy recipe for three-bean salad made with green beans, wax beans and kidney beans that regularly shows up on the menu today. “When we serve it, we tell residents that this is her recipe,” Gul says. Another resident reminisced about the lamb stew that he used to love eating. But he didn’t have the recipe, nor did he have any family nearby who could help piece it together. So Gul worked with him to develop a close approximation that’s now a dining hall favorite.

Appealing presentations were also important to them. “They’re big on beautiful plates,” Gul says. To make mealtime feel more special, Gul also started a monthly fine dining lunch with a carving station, a harp player and servers dressed in black tie. “So we’re even trying to improve the ambiance of how we serve,” she explains. (Gul opted to do fine dining at lunch instead of dinner, since lunch is the largest meal of the day.) Gul and Jenkins also regularly serve residents off of a decorative cart that gets wheeled around the dining room. “We’ll serve a big salad that way. Our presence there really makes them happy,” Jenkins says.

Of course, it’s not health food and fine dining all the time. Residents also said they wanted to see barbecue on the menu, so Gul will begin hosting monthly barbecue events this spring. And year-round, stick-to-your-rib entrées still make an appearance on the menu. Favorites include corned beef and cabbage, Salisbury steak with mashed potatoes, macaroni and cheese and even sloppy Joes.

Though the initial dining updates required an almost complete overhaul, Gul was able to put together a brand-new menu and have it approved by Summit Estates’ in-house dietitian quickly. Within five weeks, her residents got to start eating the new dishes—most of which earned an enthusiastic thumbs up. “Now, we hardly ever get complaints,” says Gul.

But she’s still game to keep the menu fresh and wants keep residents happy, so she continues to field feedback and requests with the monthly Chef Chats. “They want to be able to feel like they’re eating good food,” Gul says. “So it’s all about knowing what they like.”