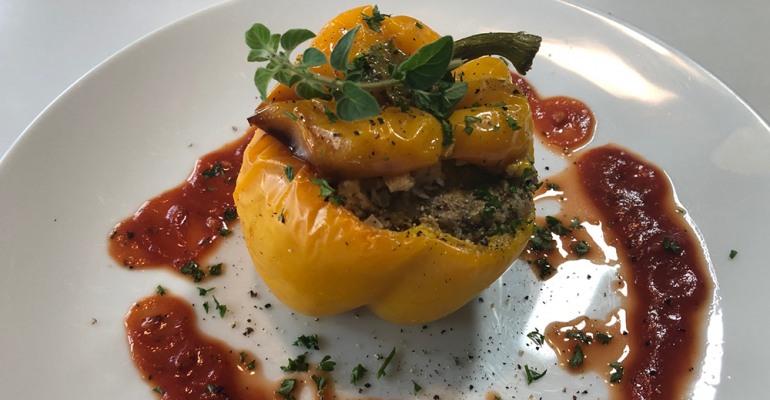 Tofu is used in these stuffed peppers, but Metz chefs also are getting to know plant-based meat alternatives for different menu items highlighted during VegFest and throughout the year.
News & Trends>Healthcare

Metz’s VegFest pumps up the veggie volume with dozens of craveable new plant-based menu items; a healthcare chef reflects on the evolution of the vegetarian menu.

As a longtime chef, Charley DeLeva can remember a time—not all that long ago—when vegetarian choices on a menu consisted of “eggplant parmesan or a Portobello on a bun” and veggie burgers were “hockey pucks with birdseed.” Now, the difference “is night and day,” says DeLeva, Metz executive chef at St. Luke’s University Health Network-Anderson Campus in Easton, Pa.

Metz Culinary Management is celebrating how far plant-based main dishes have come and compiled over 40 healthy, plant-based and planet-friendly recipes for its accounts to use during the month of October, National Vegetarian Month. While Metz had celebrated the month before, this is the first time Metz chefs have showcased their plant-based chops on this scale in a branded effort, VegFest. 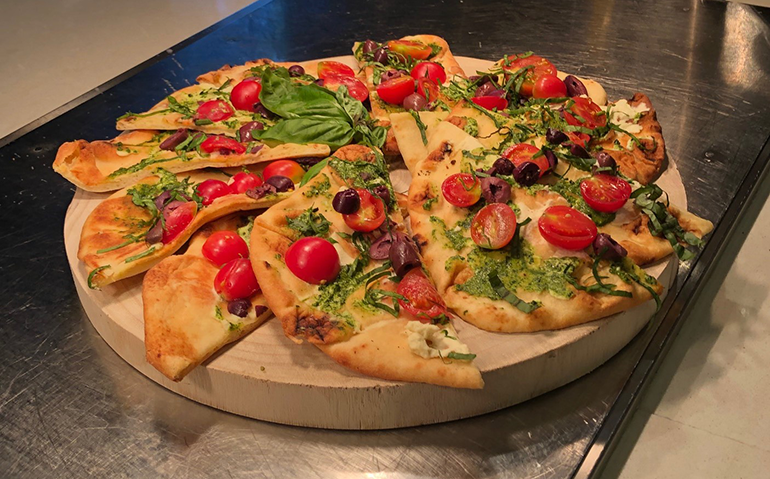 At the intersection of healthcare dining and plant-based food is the concept of wellness, something healthcare organizations are in a unique position to promote, with dishes like this vegan pizza with almond cheese.

At St. Luke’s, VegFest is a chance to show off what’s already being done, adding a few new tricks and raising awareness to customers about how good plant-based dishes can be.

“The whole point is to show people who maybe don’t normally grab a plant-based protein and show them what a well-made, chef-made plant-based dish can taste like and open their eyes to that,” DeLeva says.

During the first few days of offering plant-based dishes, DeLeva says he estimates about a 20% increase of people going the veggie route, thanks to signage including the VegFest logo.

Working in a healthcare setting that encourages patients to learn about eating right, DeLeva and his team have seen real-life results from preaching the plant-based gospel. “A gentleman wrote to us that he never knew organic vegetables tasted so good, he started making his own soups and lost weight…that’s the goal,” he says.

The organic produce comes into play throughout the year, with St. Luke’s onsite organic farms, which are also highlighted with farmer’s markets open to the public.

Along with veggies and proteins like beans or tofu, DeLeva has been exploring Beyond products for burgers and sausage crumbles for breakfast burritos. He says he’s impressed with these meat substitutes.

“The first point is the illusion of a juicy burger, because for so long people saw veggie burgers as a hockey puck with bird seed…an inedible object that no one would want to eat,” DeLeva says. “But now, it has that mouthfeel. It eats like a burger.”

But from there, it’s all in how a chef presents plant-based “meats.”

“Is it on a toasted roll? If you don’t put any effort into it, it’ll come off as being flat,” DeLeva says. “When we have large functions and picnics, we’ve used plant-based Italian sausage and peppers alongside [real] sausage and peppers. Either way, it’s a real comfort food.”