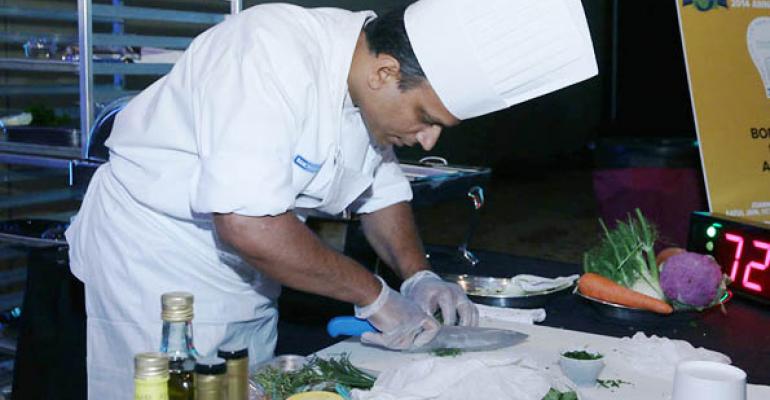 Why You Should Hire an Executive Chef

AHF panel explains the positives of having a pro in the kitchen and also offers insight on what to look for in a talented chef and where to find one.

If you’re on the fence about hiring an executive chef, or not sure where to find a good one, a panel at the recent Association for Healthcare Foodservice annual conference offered plenty of reasons why you should, and even more insight on how.

“If you want to raise your culinary level, you have to hire an executive chef,” said Jim McGrody, a longtime chef and the director of culinary and nutrition services at Rex UNC Health Care in Raleigh, NC. McGrody should know. He wrote the book on hospital food. Literally. His 2011 book, “What We Feed Our Patients,” shared a behind-the-scenes look at hospital food and his mission to make it better.

Why you should hire an executive chef?

If the goal is improving the food, you’ve got to hire a trained culinarian, says McGrody, who’s done just that at Rex. He now has six other culinary school graduates on his team. His fellow panelists, all executive chefs, offered even more reasons why such a hire is imperative.

An executive chef will help with not only the food, but also food costs, says Aatul Jain, executive chef and retail manager at Saint Clare’s Hospital in Denville, NJ. After two bronze finishes the previous two years, Jain proved he’s also still pretty adept in the kitchen, too, by taking the top spot in AHF’s culinary competition this year.

McGrody adds that a chef should be able to help with a hospital’s commitment to sustainability by providing more of a connection to local producers.

Jain suggests that one way to sell the addition of a higher priced executive chef to administrators is by explaining the ROI that comes with a pro. Not only should a strong chef increase productivity, but Jain says they can also provide opportunities for upcharges on catering events.

What makes a good chef?

“You can have the degree and even buy accolades, but a chef must exude passion,” Conklin says about his first requirement. “I even want cooks like that. I want a cook who shows me pictures on his phone of what he made his mother-in-law last week.”

Ask to see pictures, he says. Everyone passionate about food will have pictures on their phone. But it’s not just about cooking. Far from it.

“Cooking is the easy part, but the other 75 percent of the job is managing,” says Conklin, adding that you have to ask the right questions: “‘Tell me how you are a good manager. How did you improve a bad situation in your last job?’”

And remember, managing is a little different in a hospital than in a restaurant kitchen. There’s far less yelling.

“HR is different here,” McGrody explains. “We’re bringing restaurant quality to the hospital, but we have policies and procedures. Will [restaurant chefs] understand how our world works? I’ve had pans thrown at me in restaurant kitchens. That will get you fired here.”

Gee said a good rule when hiring an executive chef is they must have at least five years experience as a sous chef.

How to find qualified candidates?

Strategic partnerships, says Gee. Use the chefs from your local association chapter as guides.

“We all know people,” he says. And beyond that, vendors can be a great source. “They go into every kitchen and know who’s good, who’s not and who’s unhappy in their jobs.”

Conklin says a help-wanted ad can work, but it must be done right. If you’re going to put an ad online or in the local newspaper, it better not say “Hiring Hospital Chef.”

If you do, you’ll end up with a hospital chef.

“The ad should say something like ‘Reinventing Hospital Food: Up For the Challenge?’ You want to attract restaurant and hotel chefs,” he says.

McGrody says another key is paying them at that level. Human resource departments must understand and be willing to slot their salaries at comparable levels to local restaurants and hotels, not other hospitals.