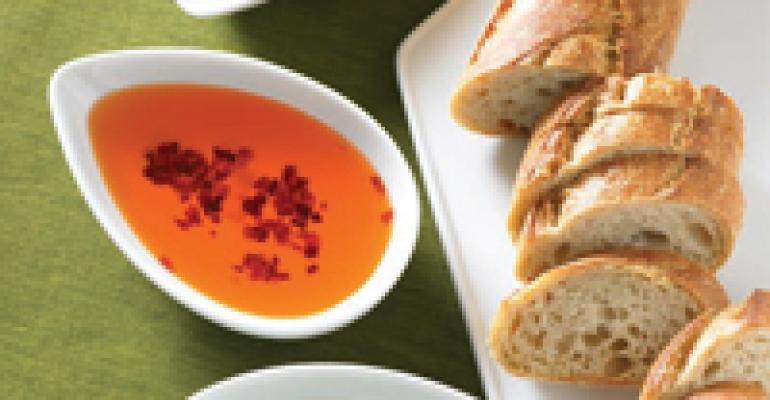 There is a lot to consider when choosing the right oil for foodservice use. And new oils are coming to market with superior nutritional and heat-resistant characteristics.

Fats provide a concentrated source of energy for the body, insulate body tissues, and transport fat soluble vitamins through the blood. They provide essential fatty acids and play an important role in nutrition.

Oil is purified fat of plant or animal origin, which is liquid at room temperature.

Fats and oils are made up of basic units called fatty acids.

Saturated Fatty Acids are found predominantly in animal sources such as meat and poultry, whole or reduced-fat milk, and butter. Some vegetable oils like coconut, palm kernel oil, and palm oil are saturated. Saturated fats are usually solid at room temperature.

Monounsaturated Fatty Acids are considered the healthiest fats. They have one double bond in their carbon chain. They are mostly in vegetable oils such as canola, olive, peanut oils, and the new high oleic soybean oils and are liquid at room temperature. They may help lower cholesterol and reduce heart disease risk.

Trans Fatty Acids are formed when vegetable oils are processed using a process called hydrogenation, which “saturates” oil molecules with additional hydrogen. Sources of trans fats in the diet include shortening, margarine, snack foods and baked goods made with “partially hydrogenated vegetable oil” or “vegetable shortening.” They have come under fire in recent years and have been pulled out of many foodservice applications, and even banned altogether in some cities.

In foodservice, fats and oils are most commonly used as a frying medium, but also as an ingredient in sauces, dressings and in baking. Depending on the desired flavor of the final product and the amount of heat necessary, oil choices vary. The following is a brief look at the most popular types of oils, along with usage and storage tips.

Refined oils are extracted from clean oilseed/oil cakes by solvent extraction for further refining. This produces clear oil, free from rancidity and foreign matter. The following are the most common types of refined oils used in foodservice: (smoke point temperatures are indicated in red)

Avocado: This unusual, light, slightly nutty tasting oil is considered a novelty and is commonly used to add a different twist to salads. It is low in saturated fatty acids and is high in polyunsaturated fat. (520°F)

Canola: A light, golden-colored oil, similar to safflower oil. Extracted from the seeds of a plant in the turnip family. Used in salads and cooking, also used in margarine and blended vegetable oils. It has a mild flavor and aroma and has the least amount of saturated fat. (520°F)

Corn oil is made from the germ of the corn kernel. It is almost tasteless and is excellent for cooking because it can withstand high temperatures without smoking. It is high in polyunsaturated fat and is often used to make margarine, salad dressings and mayonnaise. (450°F)

Grape seed: This light, medium yellow aromatic oil is a by-product of wine making. It is used in salads and some cooking. (420°F)

Olive: A monounsaturated oil extracted from tree-ripened olives. Ranging in color from light amber to green and from bland to extremely strong in flavor. It is graded according to its degree of acidity and the process used to extract the oil. Grades include Extra Virgin, Virgin and, simply, Olive Oil. It is also available in blends. (320°F)

Peanut oil comes from pressed, steam-cooked peanuts. Its bland flavor is good for cooking because it doesn't absorb or transfer flavors (both refined and unrefined). (450°F)

Safflower: A clear, almost flavorless oil made from the seeds of safflowers. It's pale yellow with a bland flavor, a favorite for salads because it doesn't solidify when chilled. It is low in saturated fat and high in polyunsaturated fat (both refined and unrefined). (445°F)

Sesame oil is made from pressed sesame seeds, and available in two varieties: light (made with untoasted sesame) and dark (made with toasted sesame). Light has a nutty flavor and is good for frying. Dark sesame oil has a stronger flavor and should be used in small quantities for flavoring foods. It is high in polyunsaturated fat. (445°F)

Soybean oil is highly refined, very mild and versatile. An all-purpose oil, soybean oil is popular due to its versatility, value, neutral flavor. It has virtually no flavor or aroma and has a high smoking point, making it good for frying. (465°F)(see sidebar for information on new soybean oils).

Sunflower: Made from sunflower seeds, pale yellow with bland flavor that is versatile. (440°F)

Vegetable oil is a term that describes various blends of several different refined oils. It is designed to have a mild flavor and a high smoke point. Most vegetable oils are made from soybeans. (smoke point varies)

Unrefined cooking oils are processed by cold-pressed and expeller-pressed methods and contain a full range of bioactive components that not only have healthful benefits and provide full-bodied flavor, but also make the oil more prone to oxidation. They are usually used for salad dressings, marinades and sauces or for light cooking.

As a general rule, unrefined oils should not be cooked at high temperatures. The strong flavors of unrefined oils can dominate whatever dish or baked good is made with them.

Grape seed: This light, medium-yellow oil is a by-product of wine making. (420°F)

Peanut: Made from pressed, steam-cooked peanuts. It has a bland flavor. (320°F)

Safflower: An excellent all-purpose oil; however, some find its flavor too strong for baked goods and salads. (225°F)

Soybean: Soybeans contain oil that is inefficient to extract in a natural manner; therefore, unrefined expeller-pressed soy oil is rather expensive. Unrefined soy oil has a strong, distinctive flavor and aroma. It has a dark yellow color with a faint green tint. (320°F)

Sunflower: Made from sunflower seeds. Pale yellow and has a bland flavor. (225°F)

Vegetable: An inexpensive and all-purpose blend of oils made from plant sources such as vegetables, nuts and seeds. (smoke point varies)