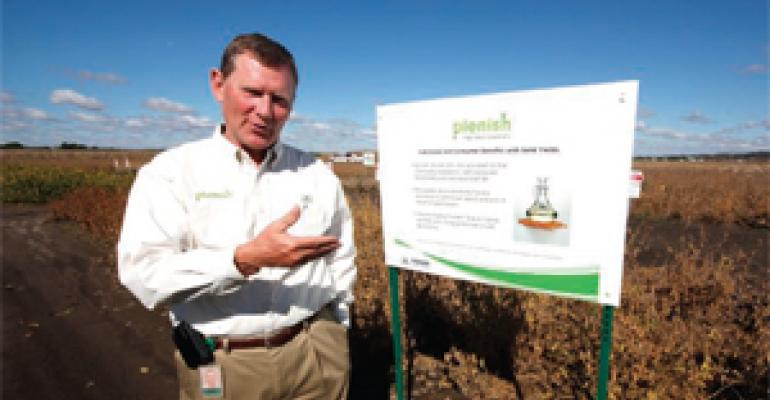 A Look at the New Soybean Oils

Advances in soybean genetics is creating a new breed of oils."

Recently, in the wake of improved oil processing technologies, genetic engineering and research, new soybean varieties with enhanced traits and new soybean oils have been developed. Here is a rundown of what's available and what may be coming in the future:

Low-linolenic soybean oil: The first trait innovation to become commercially available. Food companies have gotten away from partially hydrogenated oils and transitioned to low-linolenic soybean oil for frying and processed food. This is made possible by decreasing linolenic acid, which supports oxidative stability and makes the flavor more stable.

High-oleic/reduced saturate soybean oil: This oil, currently available to foodservice companies for testing (visit qualisoy.com if you would like to test it), can be used for high heat processing, offers 90+ hours of fry time, has no trans fats, 20 percent less saturated fat and resists odors. Most varieties of high-oleic also have reduced linolenic acid. Applications include spray oil for crackers, a blending component for margarines and shortenings, in heavy duty frying and in bakery applications. Smoke point is 465°

For more information about trait-enhanced soybean oil or to find a supplier, go to http://plenish.com http://qualisoy.com and the United Soybean Board's soyconnection.com. You can read further on biotechnology (a report called “The Benefits of Biotechnology: Scientific Assessments of Agricultural Biotechnology's Role in a Safer, Healthier World”) and more, also at soyconnection.com. For more soy information, go to http://thesoyfoodscouncil.com. For more on the nutritional side of oils in general, visit http://eatright.org and fitfrying.com