Projections indicate that the country&#39;s total K-12 enrollment will increase 7 percent over the next decade.

This article was significantly expanded and updated on March 17, 2013. 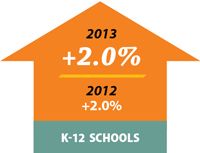 Projections from the National Center for Education Statistics (NCES) indicate that the country's total K-12 enrollment will increase 7 percent over the next decade, a reliable indicator of demand for foodservices in the nation's schools. At the same time, more of that growth will occur in the lower grades (see chart) in the near term.

For 2013, K-12 foodservice sales are projected to grow 2.0 percent in nominal terms, according to Technomic, the Chicago-based consulting organization. USDA statistics show that most of that growth is coming in the free and reduced meal category (more on that in a moment).

Regional and demographic population shifts are also having a major impact in terms of where growth occurs. Comparing its 2021 forecast to 2010 numbers, NCES says K-12 enrollments will be lower in ten states and the District of Columbia.

These and other trends are covered in more detail in the NCES report, "Projections of Education Statistics to 2021." (You can download a full copy of the report, just released in January, here.)

Over the past year, school FSDs have struggled to introduce meal plans, products and procedures that comply with tightened USDA regulations mandated by the Healthy, Hunger-Free Kids Act (HHFKA). Despite the challenges this has presented, indications are that large numbers of schools are successfully making the transition.

USDA has delayed implementation of some requirements, providing a measure of relief. The most important change was itsdecision in December to temporarily eliminate weekly grain and meat substitute maximums through the remainder of the year (calorie maximums remain). These restrictions had made it difficult to offer even some simple items like sandwiches on a daily basis. And in late February, USDA further extended that exemption through School Year 2013-14.

SNA is lobbying hard to have the relaxation made permanent, and made it a top agenda item in its legislative efforts. (The top items on SNA's legislative agenda this year are described in its 2013 Legislative Issue Paper. You can download a pdf here.)

Meanwhile, school nutrition directors remain apprehensive about new USDA breakfast requirements scheduled to take effect in September. Most want that deadline delayed until  new lunch patterns are firmly in hand, and point to apparent declines in school lunch participation rates since the new rules took effect this past September. 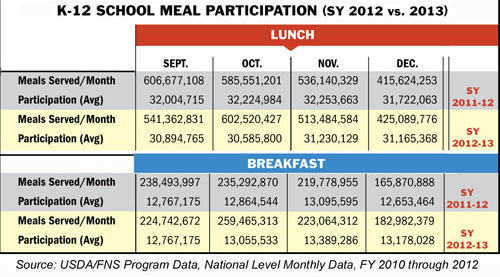 The latest meal count and participation numbers published by USDA (original reports here) suggest that while consumption of free and reduced meals are up over previous years, overall participation in the school lunch program has declined since the new requirements went into effect in September. (While total meals served per month can't be compared directly from year to year because of differences in the number of serving days and other variables, overall participation appears to have declined).

“USDA data through December, the latest available, show that free lunches are up considerably, which seems counterintuitive in an improving economy, but paid lunches are down 1,000,000 per day,” says Barry Sackin, president of B. Sackin & Associates.

“The questions are why and whether the decline will continue.  Is it because families at the margin, left behind in the recovery, can’t afford paid lunches?  Is it the impact of the new requirement for paid meal price equity imposed by the Healthy, Hunger-free Kids Act?  Is it the change in menus mandated as part of the new meal patterns?  There will be lots of speculation until more is known.”

The so-called “price equity” rules of Section 205 of the HHFKA  require many districts to annually increase paid meal prices even if existing price structures are generating a surplus. It is not clear how much price/demand elasticity exists in the K-12 market, but indications are that even small increases in meal prices tend to reduce paid meal purchases.

SNA is also lobbying to have that rule relaxed for schools without negative fund balances, arguing that a "one size fits all" policy may be counter-productive for school meal programs as a whole. “If a school is in a fund balance position, price increases are not received well by school boards or parents,” says Cathy Schuchart, SNA’s staff vp for child nutrition and policy.

Food cost increases caused by USDA's new regulations have been a problem, with requirements for larger servings of fruits and vegetables, limits on calorie counts and other aspects of the new lunch meal pattern costing more than the six-cent school lunch reimbursement rate increase available for those certified as meeting them. Some are responding by switching from fresh fruits and vegetables to lower cost shelf-stable products that still meet nutrition requirements. It is also driving more districts to join co-op purchasing groups. Food cost increases from last year’s drought, especially for fresh produce items, will make this problem worse in 2013.

“There is also still a fair amount of confusion certification for the additional six cent meal reimbursement,” says Tami Cline, owner of Client Consulting. “Demonstrating that you qualify is a fairly time intensive process. Some districts don’t have the software and other systems in place that document compliance, or the money to hire a consultant to do it. Some may not get this done in the time frame USDA has specified.”

Unpaid meal charges are also a growing problem that continues to frustrate many directors. Many complain that a lack of uniform USDA guidance on how nutrition departments should handle unpaid bills owed by families participating in school meal programs puts them in a difficult position with their school boards and local communities.

Competitive Foods to the Fore

Finally, the longstanding “competitive foods” issue had returned front and center as a major issue in the K-12 environment. The term refers to any foods sold on school property which are not part of the USDA meal program, and includes everything from vended snacks to "fundraiser" candy bars to a la carte items sold in school cafeterias. While many districts already have various kinds of competitive foods rules in place, the new regulations would set minimum standards for such policies and make them universal in schools that participate in USDA school nutrition programs.

That various kinds of foods sold on school grounds that do not meet reimbursable school meal standards may undermine school nutrition has been known for many years and was well documented in a 2001 USDA report. However, extending USDA's authority outside of school lunchrooms remained highly politicized and USDA did not have the authority (or the legislative charge) to regulate them until passage of the HHFKA.

Although some states and districts have sought to control the sale of competitive foods outside the cafeteria, many directors say that without federal guidelines, dealing with local political constraints —from student groups to athletic departments—has been very difficult. After years of behind-the-scenes discussion, USDA in February released new  proposed rules for competitive foods to plug this gap (the actual proposed rule is published here for public comment).  Many think they could prove to be a game-changer.

The newly-proposed rule would require that such food and snack items comply with standards similar to those in the school meal program itself, with certain limited exceptions. As always, the "devil is in the details" for the exceptions and in how such requirements might be enforced. (You can download the proposed rule here).


Initial analyses suggest that those schools that would be most affected are those that rely more heavily on a la carte sales and on schools in the lower grades. There are also conflicting points of view of the impact such policies might have on a la carte revenue, which often is key to the financial health of some school meal programs.

Last year, a detailed, peer-reviewed study of how the USDA’s updated nutrition standards might affect student nutrition and the changes it might have on school revenue was undertaken by the "Kids' Safe & Healthful Foods Project" and the "Health Impact Project." The two initiatives, funded by The Pew Charitable Trusts and The Robert Wood Johnson Foundation, suggests that implementing such a program may actually help the financials of many school meal programs because children will purchase more school meals when there are fewer items competing for their lunch money. (You can download a summary here and the full report here).

The earliest the rule could be implemented would be the 2014-2015 school year and most observers believe it is not likely to be put into effect until a year or two later. Regardless, the new competitive foods regulations promise to have a very significant and long-term impact on the traditional a la carte programs in school foodservice.

At the same time, a recent Gallup poll shows that two thirds of Americans say they would vote for a law that limits food sold in public schools to food that meets standards for high nutritional value. The poll also explored their views on various implementations of such a law, ranging from its extension to vending machines, bake sales and even home packed lunches. Gallup concludes that while Americans do not expect such federal policies to have a major effect on childhood obesity,"they believe the standards would help at least somewhat.

"Americans are not amenable to banning home-packed lunches, which would limit parents' and students' ability to themselves determine what the children eat in school."

✓ Strong efforts are underway to get USDA’s temporary relaxation of grain and meat lunch maximums made permanent.
✓ FSDs are looking for ways to cut labor costs that are up due to increased prep time required by new meal patterns.
✓ Planning for next year’s new breakfast program requirements. Can they be delayed? Directors want to know now.
✓ Raising prices when it’s not necessary.  USDA’s requirement that many districts raise prices for meals isn’t going over well, especially in districts running a surplus.
✓ Competitive Foods are coming under increased regulation, and most foods sold or distributed on school grounds in vending, fundraising, "special event" and a la carte programs will soon have to meet standards similar to those in reimbursable school meals.