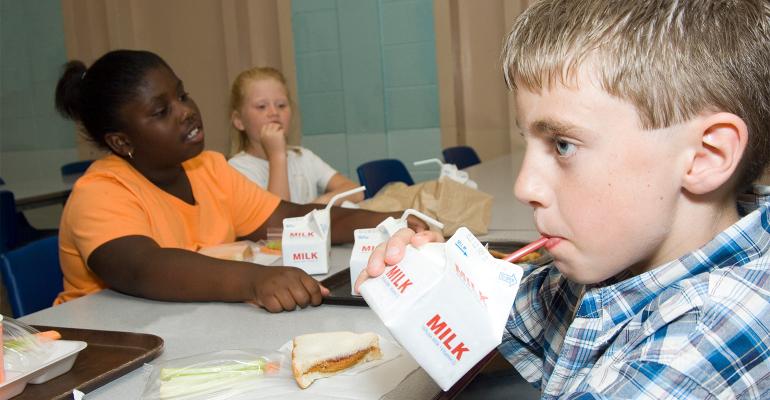 bonniej/iStock/Getty Images Plus
The Alabama Department of Education said up to 100 school districts in the state are being impacted by the plant closure.
News & Trends>K-12 Schools

This and Elior committing to 50% meatless entrees in new programs by the end of 2025 are some of the stories you may have missed recently.

Borden Dairy is closing two plants that produce cafeteria milk jugs for schools in four states. The Alabama Department of Education said up to 100 school districts in the state are being impacted by the plant closure. And if school systems don't serve milk, they could potentially lose federal lunch funding reimbursement if not for waivers.

Elior North America is teaming up with the Humane Society of the United States to increase the company’s plant-based offerings over the next three years. Through this initiative, Elior commits to 50% meatless entrees in new programs/promotion developments, maintaining an emphasis on increasing plant-based proteins by December 31, 2025.

Read more: Elior North America to increase plant-based meals through collaboration with the Humane Society of the United States

Though a smaller student population means most Virginia Tech dining centers are closed during summer, those that remain open experience their highest waves of traffic all year. Surges of conference guests plus shifting staff schedules demand increased coordination and flexibility to maintain Dining Services’ renowned food and service when the heat is on.

Read more: As Silicon Valley looks to cut back, service workers fear they could be first to go

The WVU Medicine Jackson General Hospital cafeteria in West Virginia is now open to the public following pandemic-related health protocols during which the award-winning eatery was only open to members of the hospital staff. In addition to the cafeteria and its scratch-made offerings like donuts, pretzel biscuits, mashed potatoes and chicken and dumplings, a big part of service the hospital cafeteria offers is catering. “What people often don’t know is we cater funerals, organization meetings, the community baby shower, Easter meals and so much more,” said Melanie Hall, director of nutrition services for the past 10 years. “We can also do meat, vegetable, cheese and cookie platters.”