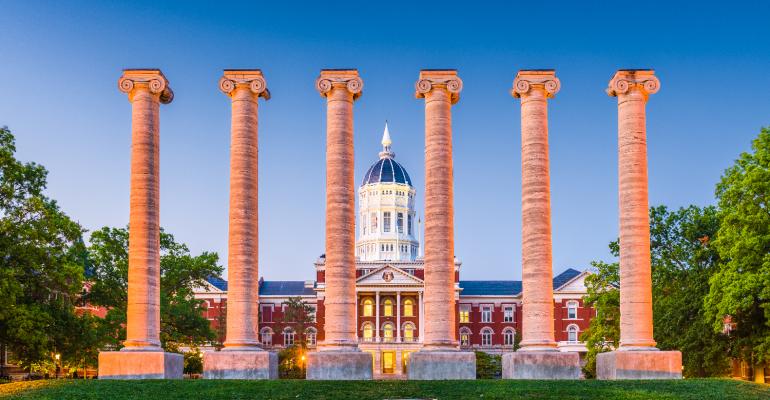 Sean Pavone / iStock / Getty Images Plus
University Catering at the University of Missouri will close Dec. 31 due to the loss of revenue during the COVID pandemic.
News & Trends>K-12 Schools

5 things: Pandemic forces University of Missouri Catering to shut down

This and the expansion of composting in Chicago Public Schools are some of the stories you may have missed recently.

University Catering at the University of Missouri will close Dec. 31 due to the loss of revenue during the COVID pandemic, with the last catered event taking place Dec. 14. Managers say they hope to continue the program in the future when staffing allows but meanwhile, the university announced that full and part-time University Catering staff will be given priority consideration for open positions in Campus Dining Services.

Read more: University Catering to close due to pandemic-related loss of revenue

Chicago Public Schools plans to add 10 more schools to the 14 that already compost their food waste this school year and divert nearly a ton of waste from landfills each day. "The District aims to meet our goal of diverting 80% or more of all cafeteria/kitchen waste from landfills through commercial composting, recycling, liquid diversion, and food recovery by 2025," CPS spokesperson Mary Ann Fergus says, though she admits that challenges "including funding, school-level support, and student, staff and parent participation" are slowing the process.

In the largest private-sector office lease of this year nationwide, Meta—the recently renamed Facebook—has rented 719,000 square feet at a campus in Sunnyvale, Calif., following up an earlier transaction leasing 520,000 square feet in Burlingame, also in California. The moves seem to contradict predictions that tech companies would flee Silicon Valley and that tech firms intend to focus on letting employees work from home rather than return to their offices. “We were always convinced that the tech sector would maintain a strong appetite for high-quality collaborative spaces,” said Rob Speyer, CEO of Tishman Speyer, the developer that sold the lease to Meta.

Kellogg has announced that it has struck a tentative agreement for a five-year contract with the Bakery, Confectionery, Tobacco Workers and Grain Millers’ International Union (BCTGM) that would end a walkout of 1,400 workers at its ready-to-eat cereal plants in Michigan, Nebraska, Pennsylvania and Tennessee, which has disrupted operations for nearly nine weeks. The tentative resolution of one of this year's longest-running strikes affecting the food industry comes just about a week after Kellogg threatened to permanently replace some of the striking workers to keep its cereal factories running during a time of heightened demand.

Leaders from the Foodlink organization and the University of Rochester Medical Center have announced a food assistance partnership that is starting with a pilot project at Strong Memorial Hospital (SMH), where food insecure patients receive food for three days, with a follow-up referring them to additional resources and services provided by Foodlink and other community organizations. The SMH Food and Nutrition Services team takes the lead on packing the bags with nutritious food provided by Foodlink, along with recipes and helpful tips for proper storage. “We want to make sure our patients are leaving the pantry with not only enough food to last at least a few days but also nutritious food that’s part of a healthy diet,” said Jennifer Glen, director of Food and Nutrition Services.