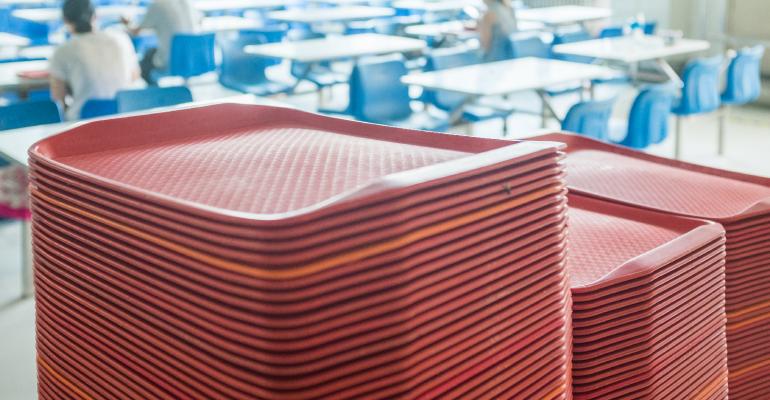 PingchengZuo / iStock / Getty Images Plus
About 100 North Dakota schools were left without food suppliers after distributor Cash-Wa dropped contracts with districts across the state because of a labor shortage, forcing them to find alternatives that carry inventory that meets federal government requirements for schools.
News & Trends>K-12 Schools

This and Wake County Schools approving bonuses after cafeteria workers walk out are some of the stories you may have missed recently.

About 100 North Dakota schools were left without food suppliers after distributor Cash-Wa dropped contracts with districts across the state because of a labor shortage, forcing them to find alternatives that carry inventory that meets federal government requirements for schools. Cost is also an issue, adds Linda Schloer, child nutrition director for the state's Department of Public Instruction, who notes that substitute distributors are "not obligated under a contract to meet a certain price point, they basically say, OK we have chicken nuggets, but instead of $24, we’re going to charge you 30.“

Following a walkout by cafeteria workers that had schools calling for students to bring their meals from home and forced district staff and parents to pitch in to ensure every child had a meal, the Wake County School Board in North Carolina voted to approve $3,750 in bonus pay to all district staff, divided into three paychecks through 2022. However, the move didn't seem to satisfy cafeteria staffers, who spoke out at the board meeting about their frustrations with working conditions, product shortages and low pay while their union continues to push for a pay raise.

The Adams House dining hall at Harvard University has reopened after a two-week shutdown due to an infestation of fruit flies traced to a broken pipe in the food composting system. In honor of the reopening, Adams held a celebration dinner that included shoofly pie, followed by a “Flies Club” party where the first 100 attendees received a hand-shaped fly swatter, according to the invitation.

Read more: ‘I Missed It So Much’: Adams Dining Hall Reopens, Though Some Fruit Flies Remain

Beginning this month, Chartwells K12 is introducing two new concepts to school clients across the country. Revolution Noodle, a concept already in place in some college and B&I locations, offers fresh, made to order noodle bowls utilizing the freshest produce, cuisine-specific noodles and authentic broths with featured dishes such as Vietnamese Pho Beef Bowl and Korean Chicken & Soba Noodle Bowl. The other new concept, Mac & Cheesyology, offers a variety of melted cheeses, proteins, vegetables and herbs that kids can customize into dishes such as Spicy Buffalo Chicken and Teriyaki Beef Mac & Cheese.

Read more: Oodles of Noodles Coming to K-12 School Lunch Across the Country

University of Massachusetts Amherst Dining Services has been awarded $319,000 by the Henry P. Kendall Foundation for its two-year “Strategies to Onboard Kelp into College Dining Programs” project that will introduce nutrient-dense, regeneratively grown New England kelp into the UMass Dining program. UMass Dining is partnering with New England-based Atlantic Sea Farms due to its exceptional kelp products, expertise in the climate impact of growing and eating kelp and having the volume necessary for a large campus dining program, according to the university.