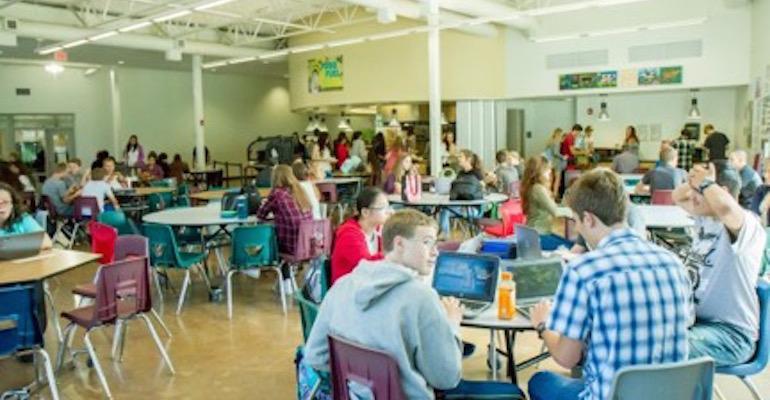 Foodservice operations in open campus high schools share a common challenge: If students aren’t required to stay on campus for lunch, they typically don’t, especially if there’s a bevy of fast food and deli options nearby.

This was the case at Glenwood Springs High School (GSHS) in Colorado, part of the Roaring Fork School District. And so GSHS has not participated in the National School Lunch Program for the past 22 years. (GSHS was the only one of the district’s four high schools that didn’t participate.)

But this year, things are different. This year the school’s more than 900 students have access to school breakfast and lunch on campus as part of the National School Lunch Program (NSLP). The cost is far better than off-campus choices at $4 for students, $5 for teachers and staff and 40 cents for the more than 52 percent of students who qualify for reduced-cost lunch. It’s also more competitively priced than the on-campus option offered for the past three years.

“The school had invited a series of private vendors to use the kitchen facility, including most recently longtime area chef Andreas Fischbacher,” says Michelle Hammond, director of food services for the district. But those meals were not eligible for the free and reduced meals and were still rather expensive. “The food was fantastic, but the prices were higher than many of our students could afford.”

While street competition wasn’t going anywhere, the district decided it was in the best interest of the students to revive the NSLP.

Luckily, the kitchen at GSHS was already well equipped since it was included in the construction of the facility in 2007. But to get the program off the ground, Roaring Fork still needed to purchase around $8,000 worth of smallwares and equipment. The menu syncs with the district’s menu and features scratch-based foods as well as a salad bar.

The district also had to hire all new staff. “We brought our champions over from other high schools to help teach the new staff,” says Hammond. “It went really well.”

Before school started Aug., Roaring Fork sent a letter to all households introducing the program. Foodservices was also present at school’s open house to answer any questions.

“There were a lot of people who wondered about what it means to qualify for free or reduced,” says Hammond. “And we’ve heard that a lot of applications have been turned in and many households are eagerly awaiting approval.”

Thus far meal participation is around 15 percent, reports Hammond, who hopes to see it grow to about 25 percent.

“It’s really important that we offer attractive options, lots of variety and quick service,” she says, adding that one of the most difficult parts of the transition (aside from a freezer that died the third week of classes) has been adjusting to the Smart Snack regulations. “The was a snack bar for fundraising that pulled in around $15,000 a year for a variety of student programs. But none of the snacks or drinks sold were compliant, so they’ve had to close the snack bar and they’re in the process of coming up with other, non-food fundraising options.”

Another challenge, according to Hammond, has been nailing down what hours are best for meal service. “Breakfast is especially difficult as we have students trickle in over the course of a few hours,” she says. “We need to figure out how to best serve those students without wasting labor or delaying prep for lunch.”

Going forward, Hammond plans to keep a close watch on participation and re-evaluate at each count.

“I think the month of October will show us the numbers we want to see,” she says. “At that point, we’ll see if we need to change our menu and find ways to strengthen any weak areas.”