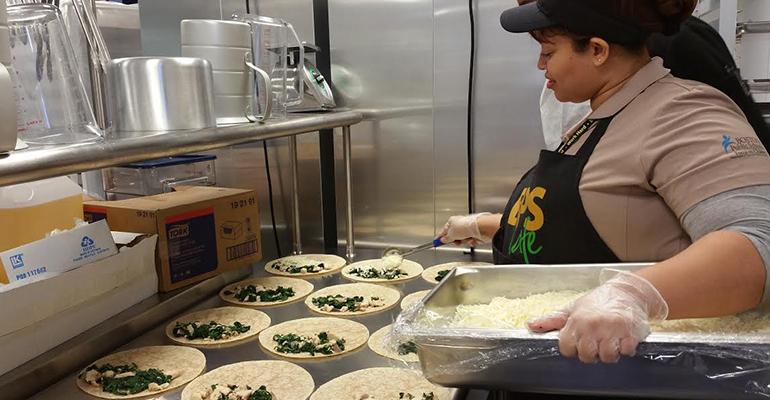 Through a program with Project Bread, one high school is testing housemade entrées, which the district hopes to offer to all students.

When Boston’s Fenway High School was mandated to move to a new facility by the beginning of this school year, Peggy Kemp, the head of school, lobbied to have the new building renovated to include a cafeteria and kitchen. Kemp hoped that by creating appetizing and healthy options in the cafeteria, students would be encouraged to eat on campus.

Kemp’s school has an open campus policy, meaning upperclassmen can leave campus to purchase food from outside eateries. While there were plenty of options in the previous neighborhood, the new school is in a residential area.

Kemp proposed creating recipes using as much fresh food as possible, and she began exploring having chefs cook on campus. When she approached the district about different possibilities, “the school district felt that we were somewhat naive, and we were,” Kemp says. “They wanted to make sure we understood what the federal regulations were about purchasing food and preparing it. It was a little daunting.”

Kemp looked to Ellen Parker, the executive director of Project Bread, for help. Project Bread is a Massachusetts-based anti-hunger and social justice organization that has worked in school districts before including its Chefs in Schools program, which brings chefs into schools to help kitchen staff and parents learn to prepare healthy meals.

Parker saw the facility at Fenway High School’s new location as an ideal place to test healthy recipes not just for the high school but also the entire district. There are about 335 students at Fenway and about 5,700 students in the district. Funding for the project came from the school district and Project Bread.

“A lot of people seem to think that processed food is cheaper [than fresh food], but you can prepare salad dressing in seconds and it’s pennies a serving,” Parker says. When people ask, ‘how can you afford fresh food in schools?’ Parker asks, ‘how can we afford not to?’ “If the kids throw the food away, it’s a waste of money,” she says.

The partnership began in September with Project Bread chefs cooking at the school a few days a week and teaching kitchen staff the recipes. The chefs set up a separate table in the cafeteria and served samples of new dishes in plastic cups. The students were given paper surveys and asked to rate each dish.

“The first two months were slow—the process of testing the menu, then submitting to food and nutrition services for them to see if it followed government guidelines and then ordering food," Kemp says. “The students loved the tasting samples but started complaining, ‘When are we going to see them on the menu?’”

By December, Project Bread-tested meals were on the menu at Fenway two to three times a week.

“The process is always sample first, survey the kids—do they like it?—then put it on the menu,” says Project Bread’s Chef Guy Koppe. “You’re continually building up a cadre of items that we could choose to put on the menu or not.” Popular menu items include spinach quesadilla, chicken teriyaki, pollo guisado, chicken potpie, shepherd's pie and a beef taco.

The response from students has been positive. “Ninth graders love the food and think it’s really different than what they are used to. Many went to middle schools where the food was just brought in and heated up,” Kemp says. As for the junior and seniors who are allowed to leave campus? At least 50 percent eat lunch in the cafeteria, Kemp says.

But the surveying continues, and Project Bread now uses tablets to survey the students and receive nearly instant results.

“You might find something that taste tested well, once you make it in a larger recipe or once the cafeteria staff is preparing it, it doesn’t taste the same way as when we first made it, or it could just be that maybe more kids or different kids answering the survey question the second time,” says Koppe, who previously worked as the director of food services of Watertown, Mass. “Then we’re looking back at the recipe and saying, ‘is there something that we could do differently? Or should we just try another recipe,’ because it needs to be consistently getting good feedback in order to move to the next level.”

The next level is introducing these dishes to other schools in the district, and after monthly meetings with school nutrition services that process has begun.

“We don’t envision being forever in a particular school. We envision being consultants,
but ideally it’s a self-operated kitchen,” Parker says. The plan is to keep Project Bread chefs in Fenway for another year.

“It’s been a real pleasure for our school to work with [Project Bread] and see what’s possible,” Kemp says. “When you’re working with a bureaucracy, you hear more about what you can’t get done, but here you hear what can get done.”