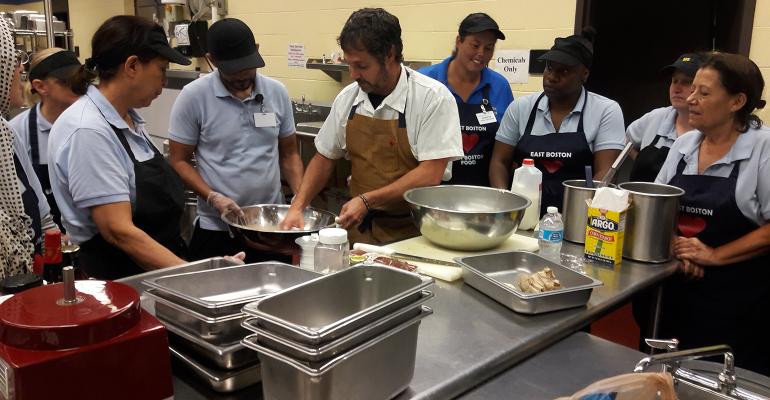 A foundation is helping in the transformation, which has seen increases of 15 percent in participation in implemented schools.

It all started when philanthropist Jill Shah of the Shah Family Foundation was picking arugula with Boston kindergarteners a year and a half ago. “I was participating in an event to educate students about food and nutrition,” says Shah. “It was so hot that day so I suggested we move inside to cool off, but I was told we were not allowed to bring food into the cafeteria.”

That counter-intuitive rule piqued Shah’s interest and when she later visited the cafeteria, she found the facilities were limited to a 30-year-old warming oven and freezer. “The food was reheated after being shipped in from Long Island, N.Y.,” says Shah. With her extensive background in startups, Shah began seeking better solutions for the district’s dining facilities, many of which were built prior to World War II when kids went home for lunch. The program has served students with healthier, unprocessed food.

“Our analysis showed that the district had available money to run a better program, just not the infrastructure,” says Shah, who adds it was a perfect investment for the Shah Foundation, which centers their giving on education, healthcare and community initiatives in Boston.

“Each kitchen cost between $50,000 and $65,000,” says Shah, “which is key to the pilot program’s success because the city was under the impression that a new kitchen would cost a million dollars to install.” The pilot program uses what Shah calls the “Blue Apron model,” where ingredients are prepped and packed in one location, and then cooked on-site where they are served.

That model means more local jobs as it requires a staff of three to operate equipment like combi ovens whereas the old model just needed one person to reheat meals. “People assume that this model is more expensive but it simply shifts labor costs from, for instance, Long Island, back to the district,” says Shah. “In fact, we’re currently spending 40 cents less per meal, and we expect that savings to grow as the model gets more efficient.”

While Shah emphasizes that the program was created to be 100-percent funded by the district’s USDA subsidy, the foundation is dedicated to getting the facilities up to the appropriate level to operate. Beyond building new kitchens, that includes staff training. “For example, Ken Oringer, a renowned chef here in Boston and beyond, came in to lend his skills and training. He taught us recipes and techniques like how to enhance flavors without salt,” says Benavidez. The children have a say about what's on the menu.

In addition to creating more local jobs and providing kids with healthier, unprocessed food, the pilot program is centered on giving students more of a say in what they eat. Benavidez calls the pilot program’s food style “deconstructed.” That is, whereas in the prior vendor model, kids were served spaghetti and meatballs already mixed together, the new model presents each meal component as a choice. “So now we offer pasta with a choice of marinara sauce, white sauce, pesto, chicken or meatballs,” says Benavidez. “It’s clear that when kids choose what they eat, they eat what they choose.”

The program has only been running in three schools since the beginning of the school year and lunch participation is already up 15 percent. Custodians have also commented that cafeteria trash bags are noticeably lighter, meaning students are eating more and throwing away less. “It’s been hugely exciting to see that vegetable side dishes such as roasted cauliflower are the first to go,” says Benavidez.

Next, the pilot program will expand to include breakfast as well as roll out to a high school in January. “The goal is for all Boston schools to have a cooking kitchen,” says Shah. “At this point, we’re still working on a timeline and considering whether we will have a central commissary to support a hub-and-spoke model.”

The timeline is very important, says Shah, as the pilot program proved that knocking out kitchens is disruptive and should be done when schools are closed whenever possible.

Shah also ties the program’s success to working with visionary principals. “In one of the three schools, the principal worked with us to move a classroom so that the kitchen could be twice as large,” says Shah.