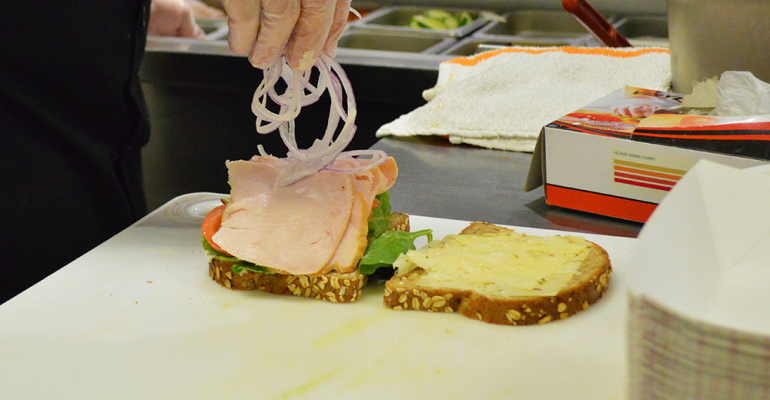 Quest Food Mgt. Services
The Bread & Bowl deli/panini station and its customized selections may be the most popular concept overall among students.
News & Trends>K-12 Schools

Students are flocking back into the cafeterias at Deerfield and Highland Park High Schools in Township High School District 113, located north of Chicago on Lake Michigan’s western coastline. The reason is the same in both cases: new branded food stations that offer a variety of trendy, customized choices, plenty of ready-made grab-and-go options for those in a hurry and a commercial-style coffee bar that is open all day for those needing a quick refreshment stop between classes.

Making all this possible is Quest Food Management Services, an FM Top 50 contract foodservice firm that specializes in the education market, especially K-12 schools. Quest had already demonstrated what it can do with a cash-sale-dependent high school dining program, such as those at Deerfield and Highland Park, that doesn’t participate in the National School Lunch Program (NSLP), when it took over management of the cafeteria at nearby New Trier High School a couple of years ago. 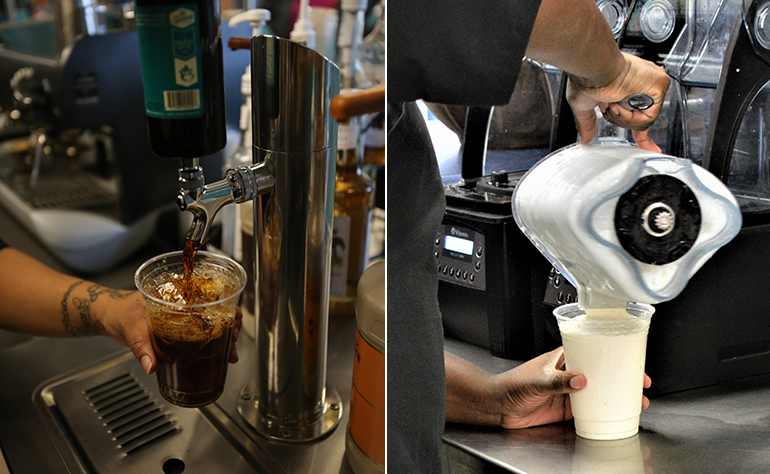 There, daily participation jumped from 70 percent to over 95 percent with the introduction of Quest’s program. At Deerfield, per capita meal counts are up 42 percent so far this year, while at Highland Park they’re up 35 percent.

Despite being slightly lower, the Highland Park number may actually be the more impressive, if only because it comes before Quest has been able to make all the infrastructure overhauls it plans to what is currently a fairly cramped and outdated cafeteria space. A full renovation is planned for next summer, but in the meantime, Quest has installed some of its branded concepts in the Highland Park High cafeteria as best it could.

“We kind of build all of our new high schools off New Trier,” observes Quest District Manager Rebecca Cohen, who oversees the company’s operations at both Township District 113 and New Trier. “The same architect [Reitano Design Group of Indianapolis] that built New Trier is also working on the Highland Park project, so they are set up similarly, though New Trier is a little bigger school and has more space, but the food court concept is the same.”

Until the cafeteria renovation can be effected, Highland Park students can enjoy lunch selections from an improved, if temporary, servery setup that provides more and better choices than were available before. 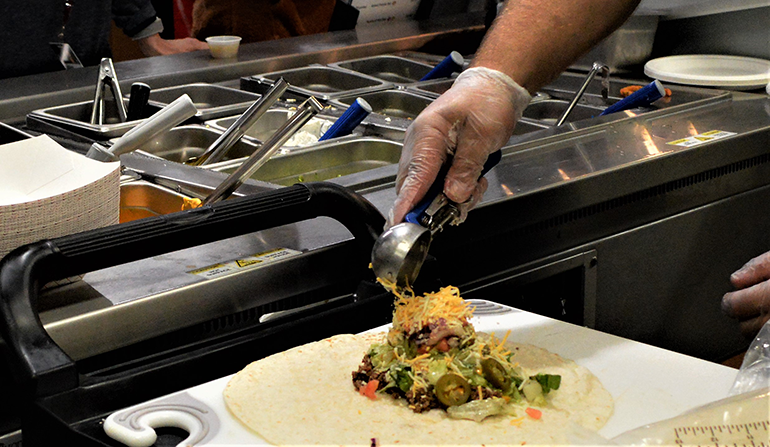 “Last year they didn’t have any made-to-order stations at Highland Park, [where] it’s a really small footprint for the kids they have,” observes Quest President Nick Saccaro, “so it was pretty much all take what you can get and go. We’ve now added two more concepts [than were there before] and four of seven stations offer assemble to order, which I’m pretty proud of given the footprint we have to work with there.”

The assemble-to-order concepts include Picante, a very popular station that offers customized burritos, tacos and nachos; Hemispheres, with its to-order stir-fries and other international selections; the Good Greens salad station; and Bread & Bowl, with made-to-order deli sandwiches and paninis as well as housemade soups that has been perhaps the most popular station overall.

In addition, there are self-serve grill, pizza and pasta stations—yes, kids build their own pasta dishes at a self-serve bar—plus the Dash grab-and-go section.

Don’t discount the importance of that last concept, Saccaro stresses.

“One thing I think is overlooked in the K-12 market is the grab-and-go program,” he notes, something Quest expanded significantly at both Township District 113 schools with great success.

The Dash grab-and-go station offers a wide selection of meals, snacks and beverages ranging from sandwiches and fruit cups to hummus, sushi and a variety of packaged beverages.

“We added two air-screen coolers at both spaces, plus reach-in beverage coolers and they’ve been going gangbusters,” he says, offering selections such as salads, sandwiches, wraps, yogurt parfaits, fruit cups, vegetable crudities, hummus, guacamole and even sushi, with everything but the sushi prepared fresh in-house. “It’s been difficult for us to keep up with [keeping the grab and go stocked], especially at Highland Park with the tightness of the space.”

The planned renovation of Highland Park’s kitchen/cafeteria space will grow the kitchen/servery area “three- to four-fold,” Saccaro says, “so the amount of prep space and the amount of work we’ll be able to do in front of students—plus the space students will have to circulate in an enjoyable atmosphere—will be huge.”

Seating capacity will also be increased by knocking out an exterior wall, and the current temporary coffee shop station will become a full-blown coffee bar with its own seating area.

There is already a fully developed model of that coffee bar concept at both New Trier and at Deerfield, the latter of which this past summer underwent the kind of major renovation of its dining infrastructure that is being planned for Highland Park.

The coffee bar at Deerfield is an all-day amenity that operates from 7 a.m. to 3:30 p.m. daily and serves not only various coffee and tea drinks but also milkshakes, ice cream, fresh fruit smoothies, breakfast sandwiches in the morning, pizza from its own pizza oven and grab-and-go beverages, snacks and packaged meal components like salads and sandwiches. Bubble tea may also be on the way. Daily sales have been averaging around $1,600, according to Cohen. The school’s enrollment is around 1,600.

Pizza is self-serve at the Crust station.

The food station concepts at Deerfield are mostly the same as the ones at Highland Park with the exception of there also being a Homegrown entrée station, which serves a rotation of regional American cuisine choices. Of course, thanks to its recent full renovation, it is a much more inviting and attractive space, not unlike a modern college dining hall.

While neither Deerfield nor Highland Park participate in the NSLP, they both still have some students who would be eligible for free or reduced-price meals under that program. These students have a daily choice of six subsidized meal combos from the various food stations, each complete with fruit and beverage. Because all students—including those receiving the subsidized meals—check out with the same looking declining balance cards, privacy is protected and any stigma avoided.