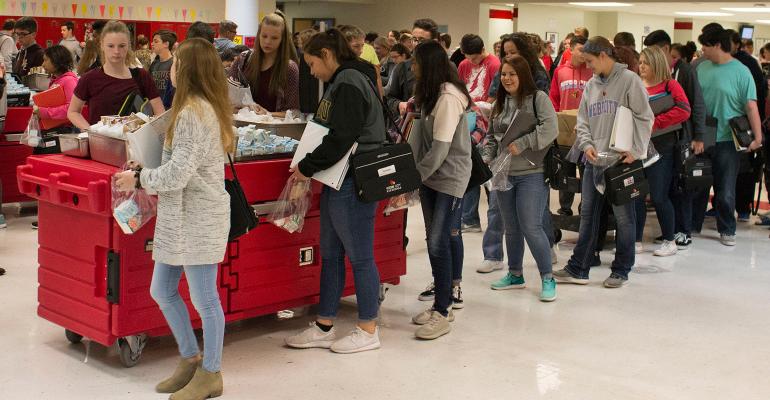 Initiatives ranging from universal free status to second chance options, breakfast in the classroom and new grab-and-go carts have more than tripled participation.

“Free and easy” seems to be the new motto for the school breakfast program at the Webb City R-7 School District in Missouri. This past fall, it implemented a series of initiatives that have more than tripled or nearly quadrupled morning meal participation district-wide. For example, breakfast counts this past October boomed to 49,488 from 15,304 in October 2016, and from 11,120 to 43,910 in November.

The changes driving the massive increases include the implementation of universal free breakfast, something that certainly is expected to make a significant impact, though its effect is somewhat mitigated by the fact that nearly half (48 percent) of district students already qualified for free or reduced-price meals.

Another significant factor seems to be the introduction of several programs that make accessing breakfasts much more convenient, from grab-and-go carts set up at high-traffic interception points to breakfast in the classroom options at all schools and second chance breakfast alternatives in the middle and high schools.

“We were looking into new breakfast models because our participation rates had been lower for breakfast,” explains Dina Winningham, food service director for the district. “We had a traditional model where students would come in and sit in the cafeteria, eat and then go to class but participation had been low—very low in some of our buildings—so we started brainstorming and looking into different models.”

What they came up with was two different initiatives—grab-and-go service and breakfast in the classroom—that were piloted in one elementary school and one high school for two weeks toward the end of last school year.

“In just those two weeks, we doubled our participation rates at those schools,” Winningham reports. That prompted the district food service team to go ahead with plans for full deployment this school year.

The first step was to secure funds to pay for the needed materials and equipment, which led to a $102,000 grant from vendor General Mills and the Food & Research Action Center (FRAC) that paid for 16 mobile carts with both thermal and cooler units that could cover all of the district’s ten school sites.

Choices off the carts include both hot and cold options like oatmeal or cereal. Other typical choices include pancakes, sausage biscuits, breakfast burritos, biscuits and gravy, muffins, pancake on a stick, yogurt parfaits and strawberry bagels plus fruit, juice and milk as sides and beverages. Some of the items were already on the menu last year in the cafeteria serving lines while others like the muffins are new for this year.

At the elementary sites, students gather in the gym, get their food from the carts and then go to their classrooms to eat, while in the secondary schools the carts are placed strategically and students eat wherever they want, including the classroom. Junior and high schoolers also get the second chance breakfast alternative that accounts for at least three-fourths of the participation increase in breakfast meals at the sites.

In fact, breakfast is now so popular at Webb City that it actually outsells lunch, an inversion of the usual participation pattern in school meal service. In November, the district saw the service of 43,910 breakfasts and 39,311 lunches with secondary sites leading the way as the middle, junior high and high schools served a combined 23,929 breakfasts and only 6,542 lunches in the month.

“We were noticing that basically, even our free and reduced kids were not eating breakfast” in previous years, notes Winningham. “We just wanted to take that stigma away [by making meals universally free] and I think that’s why it has been especially successful, especially among our secondary level students.”

Increases have also been impressive at elementary sites even though they already had higher breakfast participation rates than the secondary sites. One school boosted participation from 1,782 a day to 3,816 while another nearly doubled from 1,002 to 2,580. Overall, breakfast counts in the seven district elementary sites nearly doubled from 10,915 to 19,981 in November from the previous year.