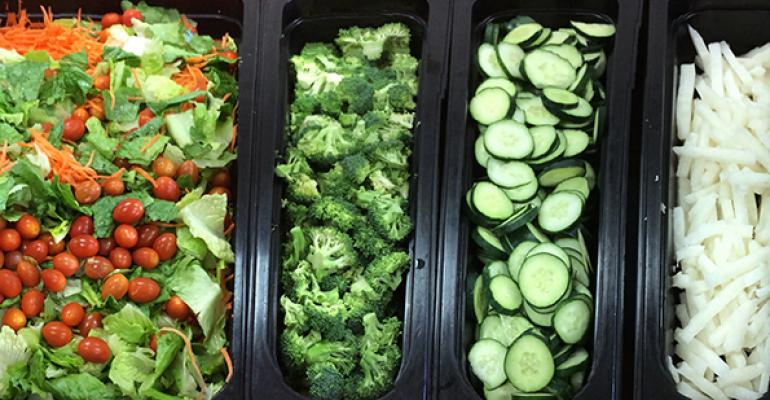 Bringing the Farm to Schools in San Diego

A farm-forward program brings a special local harvest to this SoCal district’s 350 salad bars each month.

Any onsite operation that uses large quantities of produce is at an advantage in Southern California. The perpetually beautiful climate means year-round access to local fruits and veggies. But that doesn’t mean that it’s simple to connect farmers to cafeteria trays in local school districts.

That’s why San Diego Unified School District (SDUSD) has two farm-to-school specialists who are responsible for overseeing everything that goes into the farm-to-school program. That includes ordering produce for 180 schools and a total of 300 sites and planning menus that match up with the local harvest.

One of the specialists, Kathryn Spencer, strategizes on such projects as procuring 10,000 pounds of persimmons, then getting kids to try them. It sounds like a tall order, and it is.

“We are a really big customer for these farms,” she says, adding that it can be a double-edged sword. When Spencer worked with Ron Sahu, an organic persimmon farmer in San Diego County, “we took all of his persimmons.”

Local produce goes a long way toward keeping the district’s 350 salad bars fresh, but a district this large can put a strain on farmers who may not be able to produce enough to feed the district’s 132,000 students. Right now, 15 percent of the produce is local, which the district defines in three tiers: San Diego County grown, then within a 250-mile radius and, lastly, grown in California.

Spencer plans about three months in advance, working with a contracted produce vendor, something that can help large school districts make the logistics work to get the local produce they’re seeking.

Harvest of the Month is the marketing/getting-kids-to-try-it part of the overall farm-to-school program. Each month a new fresh, local fruit or vegetable is introduced and then featured on Wednesdays of that month. The produce is mostly found on salad bars, but for sites without a salad bar, grab-and-go salads and vegetable sides work well, Spencer says.

The marketing piece is important, she adds. “It’s part of two halves that make the whole,” she says. “You can bring in the produce, but you have to let the kids know about it and also to make the full-circle connection that this came from a farm. That sparks their interest.”

The district takes a multimedia approach to make that connection, including videos that take kids on a virtual tour of the local farms and Farmer Cards that show kids who grew that avocado or kumquat.

Peewee (miniature size) avocados were very popular in May of last year, Spencer says, adding that the California kids were used to seeing avocados in the form of guacamole but not in their whole farm, which is how they were served. Other star produce items have included tangelos and Easter Egg radishes (pastel colored).

And the new additions to the salad bars are not covered up by heavy dressings or mountains of croutons, Spencer adds.

“For the past 10 years, these salad bars have been on the forefront,” she says. “We don’t even have croutons.” Instead, students help themselves to crisp jicama, legumes, cucumbers, greens and light dressings like a refreshing chili-lime or a three-ingredient honey mustard.

As the program grows, Spencer hopes to work with even more California farmers. Already, a California Thursdays program has been very successful, featuring all-California plates with lots of local veggies, plus free-range chicken drumsticks from Mary’s Chicken in Northern California.

“The main point is to provide local produce to students and to get them to think about the way food looks on their plate,” Spencer says.