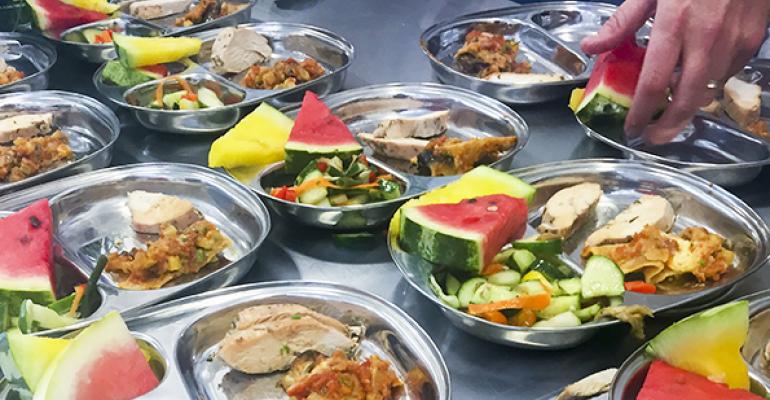 Sausalito Marin City School District serves only organic, sustainably sourced, local and non-GMO meals to students and was able to cut costs by half.

The way fruits and vegetables are grown, where they come from and how they’re produced and served makes a big difference to an increasing number of people. Ditto for the way animals are raised, harvested and prepared.

Thanks to a partnership launched in 2013 between the local nonprofit Turning Green and Bayside Martin Luther King Jr. Academy, 135 students as well as staff and faculty have access to FLOSN food for breakfast and lunch every single school day.

Dubbed The Conscious Kitchen, the program is supported by an interdisciplinary garden and nutrition curriculum.

Most impressively, after only one semester the program at Bayside MLK was already self-sustaining, successful and fully integrated into the community. Today, it’s thriving and expanding. In fact, The Conscious Kitchen recently extended to the district’s public charter school, Willow Creek Academy, which serves 380 students.

“Since we introduced The Conscious Kitchen we’ve reduced our costs by half and participation has increased significantly,” says Paula Rigney, chief business official for the district. “Sixty percent of our students eat breakfast with us and 85 percent eat lunch with us.”

When Rigney came to the district four years ago, it had just signed a contract with a foodservice provider that offered prepackaged meal options. Over time, the quality and consistency of the meals diminished and participation dropped. Plus, because the school received Title I funding and breakfast and lunch were served to every student, there was a lot of waste.

To further complicate things, Bayside MLK’s kitchen was only set up for heat-and-serve meals.

Around the same time, Judi Shils, executive director of Turning Green, was organizing the second annual Eco Top Chef Marin, where a group of eight students from Bayside MLK were paired with Justin Everett, executive chef of Cavallo Point at The Lodge at The Golden Gate, in Sausalito, Calif. The competition tasked teams with rethinking foodservice in their schools around six key terms: fresh, local, organic, seasonal, sustainable and non-GMO.

“We realized that Bayside MLK was a natural fit for a foodservice program that perpetuated the same ethos we were promoting with Eco Top Chef Marin,” Shils says.

“[Shils] knocked on my office door one day and asked if she could put the program together,” Rigney says. “It was perfect timing. We were in the process of hiring a new superintendent and we were trying to determine what our foodservice option would be for the upcoming school year since our previous contract was up. She eventually got the approval and set everything in motion.”

Shils established a leadership team of Turning Green staff as well as Everett, who signed on to serve as the consulting chef on the project. “This core group of individuals provided the necessary skills to propel the program forward,” Shils says.

Next, the team assessed the school’s food program, including budgets, the kitchen and current staff.

“We assembled a full startup budget that included a head chef’s salary and equipment needs for final approval,” says Shils, adding that a lot of the necessary equipment was either donated or purchased with funds raised by the nonprofit.

With eight weeks to raise funds and implement the program for the start of the 2013-2014 school year, Head Chef Shaun Dayton was hired and relationships were established with organic farmers, food purveyors and local retailers.

“Staffing is such a huge part of the success of this program,” Rigney says. “[Dayton] understands scratch cooking on a large scale. He understands kids. He is creative, passionate and a strong leader, too. Soon after he started, he hired competent sous chefs to help in the kitchen. This has made a big difference.”

Waste has also been nearly eliminated at Bayside MLK since it switched to offer versus serve. Plus, Dayton is able to reuse leftovers in clever, nutritious ways.

Reducing waste and switching from serve to offer—with the prepackaged lunch option, Rigney was ordering a lunch for every student regardless of whether he ate with the school meal program or not—has accounting for the drop in costs to produce the school meals.

“We’re in the process of implementing a composting and zero-waste program,” says Rigney, who adds that students and staff are more open to trying new foods as a result of the program. “For the longest time, I thought I hated tomato soup. Then I tried Chef Dayton’s tomato soup. It was delicious.”

After one year at Bayside MLK, teachers reported increased student leadership, improved academic performance, a 67 percent decrease in disciplinary cases and an increase in attendance.

“We learned a lot in the first year,” Rigney says. “For instance, many of our students weren’t aware of our breakfast offering, so we basically closed every entrance to the school except the one by the cafeteria. As they came to school they saw and smelled the food and more ate with us.”

“When we began the process with Willow Creek, we acted more as a consultant than a foodservice provider,” says Shils, adding that the program, which started on Aug. 26, has doubled participation. “We helped work with farmers and purveyors. We created a handbook that walks through all the recipes and menus, offers tips on sourcing and building local partnerships. We also helped build a food web for them.”

Going forward, Turning Green hopes to continue its role as a school foodservice consultancy and eventually certify other schools with The Conscious Kitchen label.

“There’s no reason a district or a school can’t do what we’ve done,” Rigney says. “It’s a matter of finding the right partners, adhering to your budgets and setting the plan in motion.”