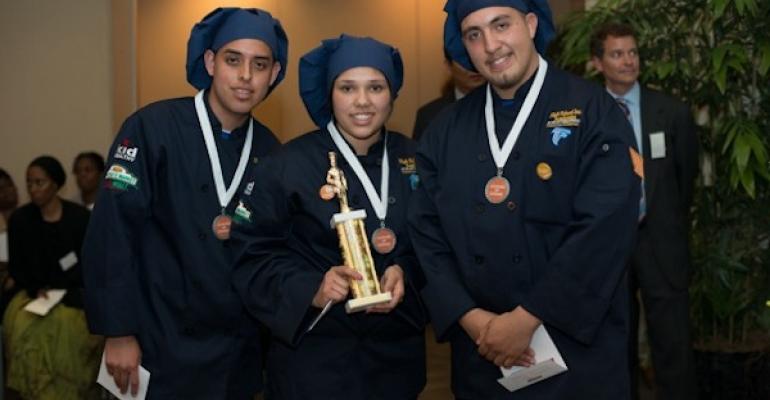 A team of three students from Santa Ana Valley (CA) High School won the top prize in the national Cooking Up Change cooking contest presented by Healthy Schools Campaign (HSC), a Chicago-based independent not-for-profit organization. The team, one of eight competing in the finals held June 10th at the Dept. of Education in Washington, DC, won with their "Pita Packs a Punch" with ground turkey accompanied by hot and sweet slaw and apple crepes. The team from George Washington High School in Chicago won an honorable mention with their meal of Chicken Rancheros, Elotes Washington and Fruta de Tropico.

Launched in 2007, the contest challenges high school students to create a great-tasting lunch that meets nutrition standards on a tight budget, using only ingredients commonly available for school food service. The eight finalists were culled from a national field that had competed in local and regional contests.

One dish from each team's lunch was also be served in the Longworth cafeteria, which serves Congressional leaders and their staff on Tuesday, June 11th. On that same day, the students attended a legislative briefing on Capitol Hill to discuss the need for investing in better school food and school kitchen infrastructures.