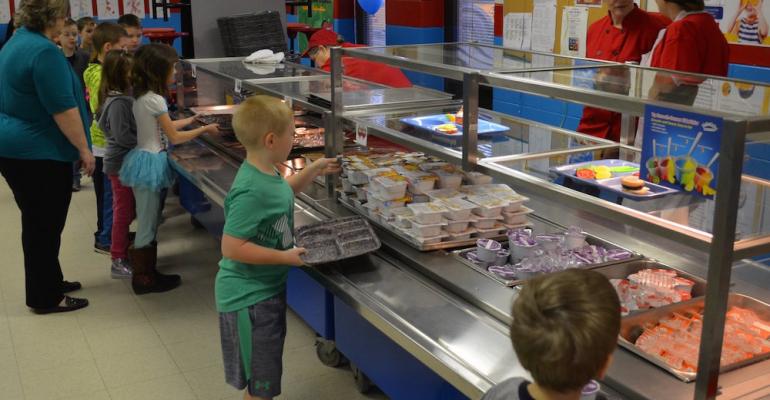 By serving breakfast after the bell, participation increased by 35 percent, test scores improved and there were fewer disciplinary issues.

Twenty-five minutes might not seem like much. But for three elementary schools in Harlan County School District (HCSD) in Kentucky, those 25 minutes added to the start of the day are having a huge impact on breakfast participation, test scores and behavior.

“We set out to increase participation and fight student hunger,” says Jack Miniard, foodservice director for HCSD. “But there have been lots of other benefits to this initiative.”

Called Breakfast After the Bell, the program has students arrive to school slightly later and report directly to the classroom. The first bell rings at 7:35 a.m. and, in shifts with the youngest grades going first, classes report to the cafeteria for breakfast. By 8:40 a.m. all students are back in their respective classrooms ready to begin their studies.

“Breakfast After the Bell allows students who normally don’t eat breakfast the opportunity to do so,” Miniard says. “It gives students that jump-start they need to get their metabolism going. It provides essential nutrients and it helps them better focus on their school work to ultimately do better academically.”

According to the Food Research & Action Center (FRAC), studies conclude that students who eat school breakfast increase their math and reading scores as well as improve their speed and memory in cognitive tests. Research also shows that children who eat breakfast at school—closer to class and test-taking time—perform better on standardized tests than those who skip breakfast or eat breakfast at home.

In addition to an increase of 35 percent breakfast participation and improved student performance on tests, the new schedule has impacted discipline rates.

“Students get off the bus and go right to class before proceeding together to breakfast,” explains Miniard, who notes that the program wasn’t without challenges. “We had to get all the principals on board due to the shift in scheduling. We also had to educate all the stakeholders—teachers, parents, the community—about the advantages of school breakfast. We also had to add 15 minutes to the end of the day to allow for enough instructional time.”

Once they got everyone on board, the program rolled out fairly seamlessly. Breakfast service mimics lunch service and participation averages around 91 percent.

“More schools are coming on board for the upcoming school year and the current schools plan to continue breakfast after the bell,” Miniard reports.

HCSD’s breakfast menu is on a four-week rotation and features everything from yogurt to pancakes and sausage to breakfast pizzas.

5 things: Breakfast in the classroom not linked to obesity, study finds
Nov 13, 2015