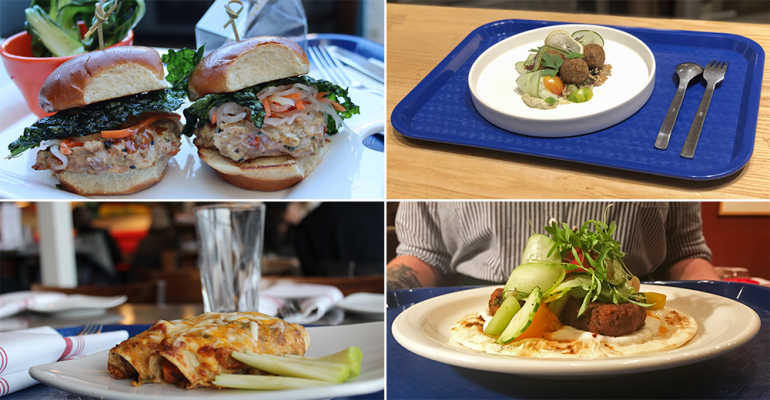 Start Slideshow ›
During October, a dozen noted restaurants across the U.S. are serving chef-created recipes made from only $1.25 in ingredients and meeting USDA guidelines for student meals as part of a Challenge created by the Chef Ann Foundation.

The chefs-to-schools movement has helped add excitement and better choices at the schools where it has been implemented, and the idea is intriguing—why not enlist the talents of some of the nation’s most creative culinarians to improve school meal menus?

The Chef Ann Foundation (CAF) nonprofit that if working to improve school meals nationwide has taken that idea to another level with its Real School Food Challenge: National Restaurant Edition program, which invited chefs around the country to create meals that follow USDA healthy meal guidelines with a food cost around $1.25, the average budget for a school lunch in the U.S. A dozen accepted the challenge, including notable names such as Alon Shaya, Gayle Pirie and former “Top Chef” contestant Brandon Rosen.

One of the participating chefs, Stephen Williams, explained why he was participating by noting that his parents were both teachers, so he was always involved with schools, and then as he was working with his restaurant, seeing how much good local product was available that wasn’t being used in the nearby schools.

“I started seeing how much we could do to make it better. There’s just so much better product—not just within a hundred miles but across the nation—that we could get into the schools with not much more effort or cost.”

As part of this first-ever national Challenge, all of the participating chefs are serving their recipes on their restaurant menus throughout the month of October, with a portion of proceeds donated to CAF. Corporate sponsors RATIONAL USA, Sprouts Farmers Market, Organic Valley, Tundra Restaurant Supply, Sterling Rice Group and Elevation Foodservice Reps will match the proceeds from each restaurant to help maximize the impact of the Challenge.

At the end of the Challenge, five recipes will be selected for their creativity, scalability and presentation, and those finalists will be invited to compete at StarChefs International Congress in New York on Monday, Oct. 28. There, they will take over the food carts during the evening Congress Cocktail Party, and CAF staff, a jury of school food operators and local media will then select the winning dish, which will be announced the following day.

“Chefs are getting a lot of attention these days, and it's so inspiring to see how they are using that notoriety to give back,” commented Mara Fleishman, CAF’s CEO, in a statement announcing the Challenge. “Showing America what is capable in school food will bring attention to the work so many of us are doing with school districts, helping them serve healthier, less processed meals."

The first Real School Food Challenge was hosted in Boulder in April 2016 and helped raise $7,500 for CAF. Since that initial Challenge, CAF has partnered with communities and organizations across the U.S. to host six additional Challenges, raising nearly $70,000.

The participating chefs and their restaurants are:

Here are eight of the dishes that were created for the Challenge and served at the respective restaurants: