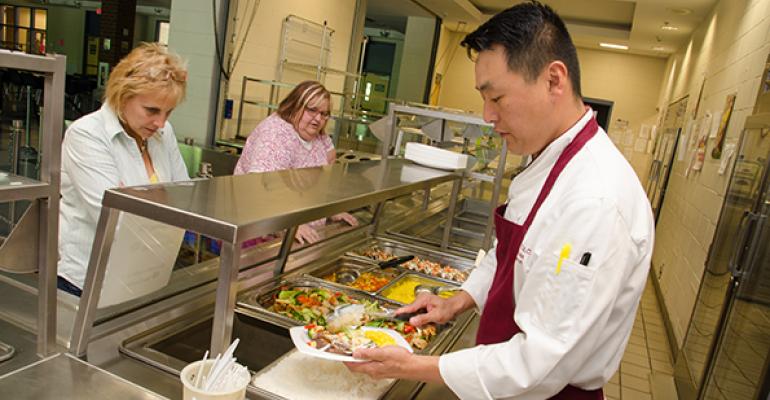 With a little help from their friends, one school district is making the most of fresh, local foods.

Any school foodservice director would jump at the opportunity to receive a grant for buying more local and regional foods. But when Boston’s Henry P. Kendall Foundation gave Chicopee Public Schools Director of Food Service Joanne Lennon $75,000, she realized her fresh new ingredients didn’t have a home in her district’s ho-hum menu.

“We needed to think of more ways to serve the locally grown vegetables. We also wanted to eliminate the deli bar that we served five times a week—which was more processed and higher in fat and sodium,” Lennon says.

Wanting to create more innovative menu items for her customers but lacking the resources to do so, Lennon turned to the culinary team at the nearby University of Massachusetts Amherst (UMass). Pairing up with a local school district to develop new dishes was a first for UMass Director of Residential Dining Garett DiStefano, but he was excited for his team to share its expertise. “They needed some assistance with recipe design. The willingness was there, but the resources in terms of culinary talent wasn’t like what we had at UMass,” he says.

When DiStefano visited Chicopee in May, he found that Lennon’s kitchen staff was equipped with a scaled-down version of the same flattops and convection ovens used by UMass chefs. But there was one thing Chicopee’s staff was still short on: time. To keep the line of hungry students moving, the cooks at Chicopee were churning out a fresh deli sandwich every one and a half to two minutes. Any new menu items would need to be made just as quickly.

Recalling the flavors that were popular among his own customers, DiStefano and his team settled on concepts driven by Asian and Latin flavors. The deli bar would get swapped out for Asian stir-fries on Tuesdays and Tex Mex-inspired enchiladas on Fridays, both made from locally grown vegetables and locally raised, all-natural chicken.

Over the summer, the UMass chefs trained foodservice staff at Chicopee on how to execute the new dishes as efficiently as possible. “They showed us tricks of the trade for putting them together, which made it a lot easier for us to replicate,” Lennon says. By slicing vegetables and having them ready to go before service began, staff could quickly toss them into the tilt skillet. Lennon was even able to buy her chicken pre-cut, so her staff wouldn’t have to spend time breaking down the whole breasts.

Previously, two staff members had manned the deli line. But with DiStefano’s concepts, Lennon only needed one. “They no longer needed that other person [up front], so they could be allocated towards the back of the kitchen,” DiStefano says. “We made it more efficient using less bodies. And it was less expensive than deli sandwiches, since deli meat isn’t cheap.”

By late July, the UMass-Chicopee team was ready to do a test run with Chicopee’s administration—who were so impressed with the food that they thought Lennon had ordered catering. After a few more practice sessions, Lennon’s staff members were making the new dishes entirely on their own.

More than a month into the new school year, the Chicopee foodservice staff is starting to hit its stride. “We’ve had to adjust to the production and ordering, since you don’t know how many kids will take [a new item] until it’s been repeated for several months,” Lennon says.

But despite those behind-the-scenes adjustments, the new meals are doing well. Students who might have turned their noses up at school lunches in the past are eagerly lining up. Faculty and staff are buying more meals, too. “By having a higher quality menu item, you start to build a bigger revenue base with teachers who would otherwise bag their lunch,” DiStefano says.

Even so, the deli sandwiches—which are still served on Wednesdays and Thursdays—remain popular with some students, so Lennon doesn’t plan to get rid of them altogether. But she does want to increase Chicopee’s local purchasing—and work with UMass to develop more menu items centered around local foods. “One of the things that could be very successful is a baked potato bar. Root vegetables are very abundant in the winter,” she says.