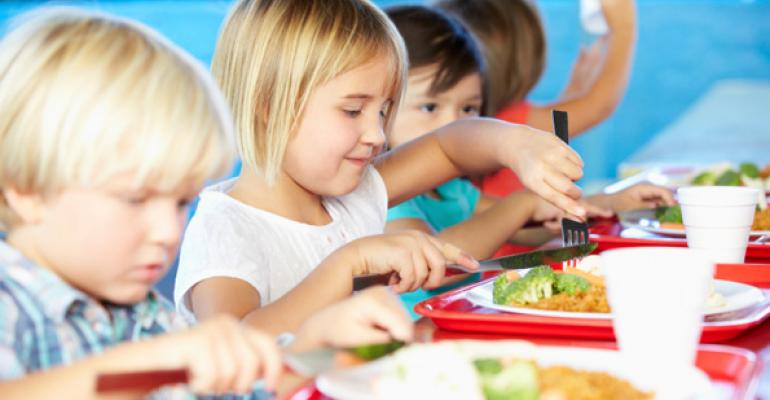 The Complex World of K-12 Purchasing

With the announced merger of the two national foodservice distribution giants, Sysco and US Foods, the food distribution landscape is undergoing a seismic change. What will be the impact on schools, a unique segment of the onsite foodservice universe?

There are more than 14,000 public school districts in the U.S., and about 100,000 public schools, but the average district has less than 1,000 students. While hard to quantify with certainty, school foodservice generates between $18 and $20 billion dollars annually, approximately 60 percent of it from federal reimbursement for school meals. School meal program purchases generate around $10 billion.

Both the National School Lunch Act and Code of Federal Regulations include controls on procurement, generally by setting a baseline that states and districts use to establish their own procedures (as long as they are not less stringent than federal law).

Federal procurement rules require that contracts be awarded to the vendor that offers the most advantageous proposal and is both responsive and responsible, but that doesn’t necessarily mean that schools have to buy the least costly products if doing so undermines the integrity of their programs.

Eighty percent of what is procured by school meal programs is commercial product, with the rest being government commodities. Distribution represents a third area of procurement expense, though most schools bundle product and distribution costs, asking distributors for pricing of items either generically (2.25 ounce beef patties) or specifically if there has been a competitive solicitation to identify acceptable products by brand and code.  For larger districts, the solicitation may go directly to the processor, and distribution services are sought separately for the products of each successful vendor.

By law, schools must use a competitive procurement method for all purchases.  Where the only, or primary, differentiation in making an award is price, USDA requires schools to use price quotes or bids, but where there are other significant factors as well, schools might use a request for proposal (RFP) approach.

When issuing an RFP, schools have to identify both the factors the award will be based on, and explicitly state the weight given each factor in the final decision (price must be the most heavily weighted factor). Also, factors like level of service and variety of SKUs must be defined by objective standards.

This approach works well for larger districts and those with a number of vendor options. Unfortunately, most school districts are small to very small and have limited choices both in available product and distribution services. For the most part, they must choose from the SKUs carried by the distributors available to them.

To work around some of this, schools use a number of strategies. One is joining a purchasing cooperative such as the Super Co-op in California, which represents districts serving about a third of the state’s school meals. Super, as it’s known, bids directly with manufacturers for products, and separately for distribution. A few states take on the co-op role themselves, issuing and administering all aspects of procurement for their districts.

Another option is a piggyback bid, where smaller districts join in on a contract negotiated by a larger one (assuming the vendor’s consent). Related to the purchasing co-op approach is the use of a group purchasing organization (GPO), a relatively new phenomenon in the school procurement world because of the segment’s regulatory restrictions and price sensitivity.

For the 20 percent of school food represented by USDA commodities, a variety of distribution systems are in play. About 55 percent of commodities are bulk items (chicken, cheese, beef, turkey, etc.) that are diverted directly to processors for conversion into end products. These are then treated as commercial products except that the value of the commodities used in their manufacture are passed on as discounts to the schools purchasing them.

Unprocessed commodities, what used to be called “brown box commodities” because of their packaging, are termed “direct ship” by USDA and their distribution varies by state. Some handle it themselves from state warehouse and distribution systems, while others contract with commercial distributors.

Who's distributing to schools and what's ahead

The school market represents a challenge for distributors for a number of reasons.  Dealing with large numbers of small buyers—some rather unsophisticated in product knowledge and usage patterns—can be an administrative nightmare. Also, many schools want product delivered to each school site, which increases costs, while still demanding the lowest prices possible.

On the other hand, the school market also offers opportunity as the business tends to be “contra-cyclical” in that as the economy falters and negatively impacts commercial foodservice businesses, school meal business increases. Hence, as the economy soured after 2008, mainline distributors became more aggressive in pursuing school business to fill their trucks. Then, more recently, as the economy began to rebound (and as school meal counts began declining due to changes in federal regulations governing school meal programs), the business became less attractive and districts around the country have seen a decline in interest from the big distribution houses.

Distribution for schools varies considerably by location. If you look at geographically large states with low populations, like Wyoming and Idaho, they have very limited options, with the very large national companies like Sysco and US Foods dominating. So the merger of these two companies may have a significant impact in these markets and also on markets like the Mid-Atlantic and Tidewater regions, where the big nationals have a major market share despite the presence of some regional houses.

To alleviate this, the Securities & Exchange Commission may require the merged Sysco/US Foods organization, as a condition of regulatory approval, to find distributors to move into such regions to provide competitive balance. That of course would have potentially significant impact on these other distributors.

Prime candidates for this role include large regional distributors that have already developed divisions that support school sales. Gordon Food Service, originally operating only in the upper Midwest, has in the past few years expanded its operations into the Southeast.  Shamrock Foods, originally a dairy company, has become a major regional player in the Southwest. For both of these companies and others, the Sysco-US Foods merger might create opportunities to expand their footprint.

There are also local companies, many of which already support the school market.  However, the specialized product mix and the requirement in some areas to distribute USDA commodities—with the increased responsibility and record keeping that requires—may represent a bridge too far in terms of cost and complexity for some of these smaller firms.

Industry dynamics are currently in flux for schools. Declines in participation and increased costs related to changing regulations are putting pressure on the school foodservice business model. Congress is gearing up for another round of school meal legislation in the next year or so, which is adding more uncertainty to school programs.

The increased costs of meeting federal meal regulations is putting pressure on schools to find cost savings at the same time demands for an increasingly special set of product needs are driving up costs. Distributors are being asked to do more for less, and the merger of the two biggest distributors may reduce competition and SKUs in some markets.

The upside of the school segment for both producers and distributors is that school meal programs are an important part of our society, and it is unlikely they will ever go away. And schools, while financially challenged, pay their bills. That means there is long-term security for distributors willing to embrace the channel, even if the margins are slimmer than other segments.

There are a lot of factors in play in the school distribution arena right now: mergers and consolidations, changes in school meal participation, shifting product demands and SKUs, pending changes in federal child nutrition laws. How this plays out over the next several years will have deep impacts on commercial and non-commercial channels throughout the supply chain.