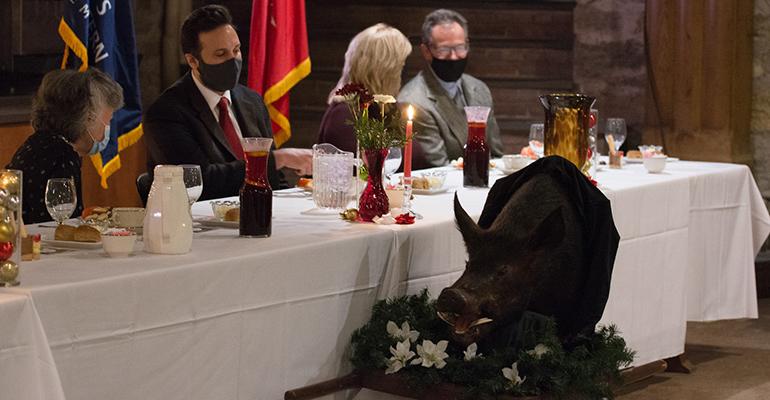 St. John’s Northwestern Academies
Traditionally, the boar’s head (artificial, made of plastic) is presented to the school president to launch the banquet celebration. The tradition dates back to 1884 at St. John’s Northwestern and to as far back as the 14th century in Europe, where it originated.
News & Trends>K-12 Schools

Company that specializes in serving healthcare facilities has broadened its market reach with a contract to operate dining services at St. John’s Northwestern Military Academy.

Many public school districts are experiencing meal count shortfalls due to all, or at least many, of their student customers learning remotely, hampering easy access to meal distribution. One school that has seen less impact from this is St. John’s Northwestern Military Academy (SJNMA) in Wisconsin, a day and boarding school for students in grades 7-12 that continues to provide full in-person instruction and activities, with appropriate distancing and safety protocols. While the enrollment is down somewhat this year, the impact of coronavirus has been less than at most other institutions serving the same grade levels.

“Our desire is to have [students] here on campus,” explains Eric Wozniac, dean of academic advancement. “We’re very much about the in-person experience and we feel we can maintain a safe environment” while still holding in-person classes and maintaining the boarding school resident student population.

While SJNMA has seen a bit of a dip in enrollment over the fall, at around 155 it’s not significantly out of line with recent years, Wozniak says, and in fact he is expecting an increase of about a dozen more students in the spring term. The boarding student population, which traditionally comprises most of the enrollment, has been accommodated with single room occupancy for the most part, though some doubling up may have to be done if the spring enrollment number increase materializes.

Providing meal service at the SJNMA campus is FM Top 50 firm HHS, a contract management company that traditionally operates in the healthcare and senior dining markets but is now expanding into education, initially with non-food-related services like housekeeping and facility management. SJNMA is its first culinary operation in a school environment and began last fall when HHS took over the operation of dining services at SJNMA from another contract company. It has already produced increased general satisfaction among students about the meal program even despite the limitations imposed by COVID-required protocols, says Wozniak.

“Kids pretty much notice everything,” he says about the change in providers. “Teens are very critical, and it’s hard to satisfy everybody, but while most reactions [to the meal service] focused on COVID protocols, I think there was definitely a positive shift from the previous provider. I’d say [food] quality has definitely gone up and students have responded positively to that.” 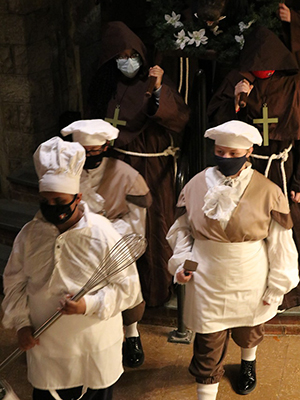 “Our company is very focused on meeting the needs of individual locations with our menus, so everything we serve is original content,” explains Christopher McKenzie, who heads the dining operation as executive chef and brings a wealth of culinary experience to the program, having previously owned four restaurants and having served as executive sous chef of resort operations for Steamboat Springs Ski Resort and as chef tournant for the Grand Hyatt in Denver.

“We try to make big homemade meals from scratch that are familiar enough that we can appeal to a large enough segment of the student population,” he explains. “You can’t please everyone all of the time, but if you’re making delicious stuff that’s familiar to them, then they enjoy it.”

Each meal period offers three hot options. For instance, breakfast can consist of a choice of apple granola baked pancake, roasted vegetable egg and cheese frittata and a selection of breakfast meats. “They love kielbasa and bacon here,” McKenzie notes. There are also daily selections of quickbreads such as banana bread and pumpkin chocolate chip.

Lunch and dinner have a three-piece hot pickup of protein, starch and vegetable with a combination of traditional favorites like meatloaf, lemon pepper roasted chicken and barbecue pulled pork sandwiches alongside some more exotic fare that are spins on traditional dishes. For instance, fried chicken could be a honey Sriracha flavor served with teriyaki lo mein noodles and braised kale, while a barbecue night could offer flavor varieties ranging from Korean and Chilean to Carolina and Texas.

McKenzie notes that the student body is widely diverse, with cadets from 17 countries such as China and Mexico, and they and their families will make requests to give the students a taste of home. 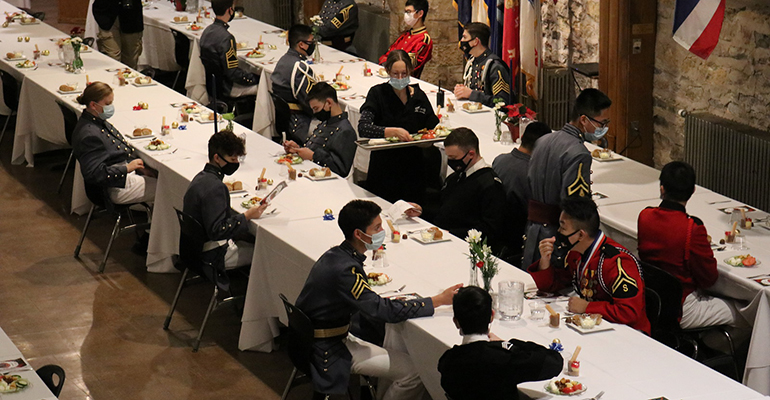 The annual Boar’s Head Banquet at St. John’s Northwestern Military Academy was held in December with social distancing and staff service protocols rather than the traditional family style service of previous years because of COVID restrictions.

Menus are not on any set cycle or rotation and are generally created only a few days in advance. As for variety, McKenzie notes that following a complaint about “serving the same things” from one cadet, he went back over the recent menus and found that the kitchen had served 27 different dishes over 28 meal service periods.

“HHS has been very creative and cooperative in coming up with meal solutions that fit us,” offers Steve Matz, director of development and public relations for SJNMA.

One change from prior years forced by the pandemic has been a loosening of SJNMA’s congregate dining culture, with seating now spread out—“We used to pack ‘em in pretty close,” Wozniak notes—and lunch, formerly consisting of a single serving period, now broken into two separate seatings. Dinner remains a single serving period but rather than most students showing up at the same time as before, attendance is more scattered, regulated by informal voluntary practice, semi-formal nudging (“we have a loose policy of not letting them hang around after they finish eating,” Wozniak says) and by residence hall managers sending groups down to eat in staggered shifts. Also, faculty and staff, who used to eat with students, are now encouraged to take their food and eat elsewhere (students, however, are required to eat in the dining room and attendance at each meal period is mandatory).

One culinary tradition that definitely has remained, if in somewhat of a modified form, is the annual Boar’s Head Banquet, given a few days before the Christmas break and involving the entire student body as well as faculty, staff, families and their guests. A tradition dating back to 1884, Boar’s Head last year still had all students and select staff members attending, but otherwise the guest list was severely restricted to maintain adequate social distancing.

Also, the menu, traditionally served family style, was changed to a staff-served, socially distanced buffet line highlighted by a choice of meat from a whole roast pig or roast turkey, plus sides. Salads and desserts were served at the tables.

Despite the limitations, the banquet was a familiar operation for McKenzie, who has done plenty of catered events with Hyatt and Steamboat Springs, though there is one critical difference between those previous experiences and his current role.

“When you operate restaurants or work in hotels, the customers come and go so it’s pretty impersonal, but here, you see the kids every day, you get to know them, and it makes for some really cool interaction,” he says.