Revenue is down and labor needs are higher than ever. But serving food pandemic-style has come with an unexpected positive too.

Like most school foodservice operators around the country (and, well, pretty much everyone else), Baltimore City Public Schools Executive Director of Food & Nutrition Services Elizabeth Marchetta went into her district’s March 2020 shutdown thinking that things would be back to normal within a few weeks. Fifteen months later, she’s still in COVID mode—but things are starting to change.

The district of approximately 80,000 students plans to reopen fully for the fall. “We’re looking forward to getting more variety on our menu and when we have a more seamless and efficient system through the service line,” Marchetta says.

When the pandemic first hit, Marchetta and her team started out serving to-go meals at just 18 sites across the district. They were up to 80 sites by the beginning of fall, at which point some students also started coming back for in-person learning.

“During the shutdown we had to figure out how to provide to go service, then how to slowly reopen in person, which we’d never done in those formats. Both were more time- and labor-intensive,” she explains. 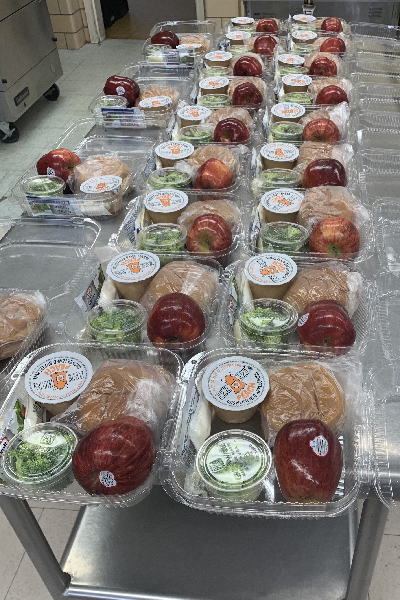 Photo: To-go lunches packed in and ready to go in disposable containers.

Still, Marchetta was committed to providing students with freshly prepared meals—no matter where they were learning from. Children and families that pick up food can receive up to two days of ready-to-eat breakfasts, lunches, suppers, and snacks at a time. “We don’t want to rely on the fact that people have kitchen equipment to prepare this food, and it might just be a child at home,” she says. Some of the to-go sites also offer 20-lb produce boxes funded by the City of Baltimore.

Students who came back to school last fall saw changes too. Because meals were served in the classroom instead of the cafeteria, “we had to adjust menu items to things that would hold and transport well, like deli sandwiches. We had to put them in to-go boxes instead of compostable trays,” Marchetta says.

And the choices were pared down. “We’ve consistently kept to one menu [for remote and in-person learners] to keep it simplified,” she says. “You might have eight different points of sale in the morning now, whereas before you have one. The crunch on staff has been to serve at multiple locations, so you don’t have the people in the kitchen to do five different items.”

The challenges have gone beyond the menus themselves. “Learning how to seamlessly transition an operation when there’s been an exposure in the kitchen crew and the staff are all quarantined has been a struggle,” says Marchetta. “We were used to dealing with things like no hot water or or no delivery truck, that we could handle. But everyone on a team being out overnight was something new to us.”

There’s been a silver lining though. Having most students at home meant Food & Nutrition Services “got more people familiar with our work that didn’t know about it before,” Marchetta says. “The opportunities we have with virtual programming were really able to take off.” To date, Marchetta and her team have organized 176 virtual field trips to the district’s educational farm. The half-hour programs have a flexible format that farm-to-school educators adapt to connect to various academic concepts like science, math, ELA, and social studies.

There’s even been opportunities to host virtual farm-to-school summits that bring together students from multiple schools. The African American Foodways Summit provided a day of workshop on African American food culture and history, while Dig Into May! featured a series of virtual and in-person gardening workshops. And speaking of gardening, the district has also distributed more than 5,000 ag-tivity kits that give students hands-on opportunities to learn about where their food comes from, from herb garden kits to kits that teach about aquaponics, mushrooms, and vermicompost. “It was something the kids could do at home that still really connects around the meals we’re doing and the science curriculum,” says Marchetta.

Even with the increased opportunities to connect kids to their food, the realities of the pandemic means that revenue is down. “We’re now up to almost 35,000 meals a day, a little more than a third of our usual volume,” Marchetta says. “Through financial grants and a commitment from the district, we’ve been fortunate not to have any layoffs.”

And hope is on the horizon. “All schools are currently providing some form of in-person learning. We still have a majority of students that are virtual, but the goal is to have everyone back for the start of the next school year,” says Marchetta.