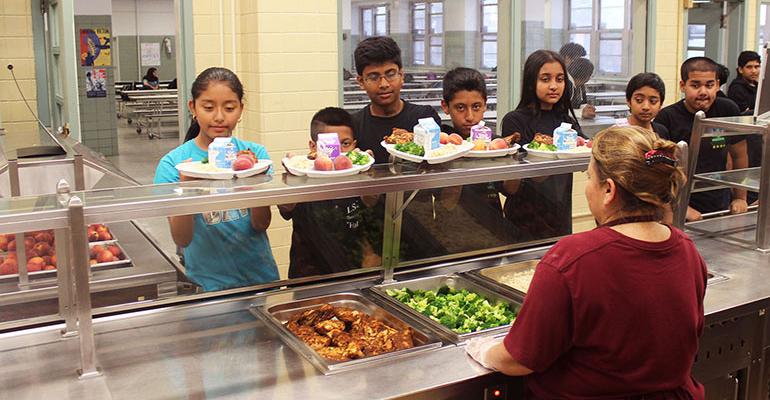 In March 2012, students at over 4,500 schools across six school districts all sat down to the same balanced meal: savory roasted chicken, brown rice with seasoned black or red beans, steamed green broccoli, fresh seasonal fruit and milk. It was the first initiative of the Urban School Food Alliance, a coalition of six of the largest school districts in the U.S. that leverages collective purchasing power to raise the quality of food, lower costs and maintain environmentally sustainable practices. “We wanted to show that we could harmonize our efforts in providing healthy meals,” says Eric Goldstein, Alliance chairman and chief executive of the Office of School Support Services at the New York City Department of Education.

In the three years since that synchronized lunch, the New York City, Los Angeles, Chicago, Miami-Dade, Dallas and Orlando districts have proved that they can work together effectively to improve the dining experience of their nearly 3 million students.

“We’re constantly meeting to discuss what our needs are, and we also look at where we can add value to our cafeterias relatively quickly,” says Goldstein. So far, the Alliance has replaced polystyrene trays with compostable plates, introduced antibiotic-free chicken and is in the process of replacing plastic sporks with compostable knives, spoons and forks.

“We started with the plate because it’s rich in symbolism,” says Goldstein. “After all, you build a meal from the plate up.” Using their collective purchasing power—$550 million in food and supplies annually—the member districts were able to lower the cost of a compostable round plate from 12 cents to 5 cents, which is about the same price as a polystyrene tray. The more environmentally conscious choice, which eliminates 225 million trays from landfills every year, also became a fiscally responsible choice for tightly budgeted schools.

The Alliance then centered on improving the quality and safety of chicken, one of the most popular items served in the member districts’ cafeterias, and in 2014, it established an antibiotic-free standard for suppliers of its chicken and chicken products.

Most recently, the Alliance is working to phase out all plastic sporks in favor of compostable cutlery. This not only eliminates unnecessary landfill waste, but as Goldstein points out, “the spork is an inhibitor of eating good quality food. Imagine eating chicken on the bone or broccoli with one; it’s just plain difficult.”

These three improvements are a major win considering they affect three million meals every day in the member districts, but the road getting there was cumbersome, admits Goldstein. “What we’ve learned and confirmed again and again is that the market for school food purchasing is very fractured and inefficient. We can support the standards better by having more focused, amalgamated and sophisticated procurements like ours. Because right now, there’s a lot of extra costs that could be better spent on actual food or supplies.”

As the Alliance is a non-profit, it doesn’t have the authority to make bids. So instead, member districts take turns submitting bids and then the other districts piggyback on them. But even when a bid is a success, each district may have its own regional setbacks. “Everyone’s distribution is going to be different,” says Goldstein. “So even after we secure the best price, each district will have to adjust for distribution cost.”

The other challenge, Goldstein says, is the sheer scope of analyzing and procuring school food needs. After all, this isn’t the private sector where things can be fast-tracked.

“It takes a tremendous amount of coordination,” says Goldstein. “Trying to calibrate the handshake between districts and industry is sometimes like trying to dock a spaceship through the International Space Station: It takes a lot of coordination, patience and practice, but we’re getting better and better. Nothing proves success like success.”

With three quality procurements behind it, the Alliance hopes to ramp up efforts and roll out five to 10 new products in the next 12 to 18 months. “We have our eyes on nitrate-free deli meats, bringing in spices that can be expensive and out of reach for many districts, and we’re looking for ways to incorporate local produce like carrots into national bids.”

In the years to come, the Alliance not only hopes to significantly increase the high-quality items it purchases but also grow in membership. To that end, it recently partnered with the Alliance for a Healthier Generation, which will allow small, rural school districts to benefit from its innovative and affordable procurements and create healthy meals and healthy environments for students outside of big cities.