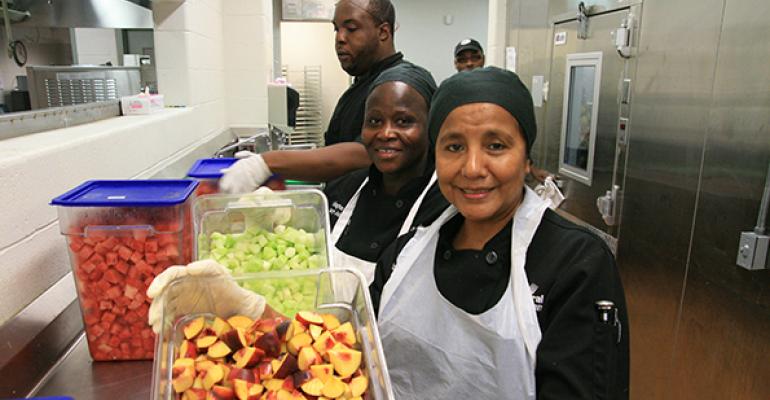 A D.C. Partnership that Actually Works

A unique union between the District of Columbia Public Schools and a community kitchen is helping to increase participation and improve menus.

When it comes to school food, Washington, D.C., and good collaboration, the news hasn’t been too positive lately. But that’s not the case for one partnership between District of Columbia Public Schools (DCPS) and DC Central Kitchen (Washington, D.C.), a nonprofit community kitchen that has been providing healthy, scratch-cooked meals to a handful of DCPS’s schools (as well as two nearby private schools) since 2008.

“The 10 schools we work with are located primarily in Wards 7 and 8,” says Alex Moore, chief development officer for DC Central Kitchen.

These areas are home to D.C.’s highest rates of poverty, unemployment and obesity. They are also food deserts, a geographic area where affordable and nutritious food is difficult to obtain, particularly for those without access to an automobile.

Turning the tables for the students and families in these wards, DC Central Kitchen prepares nearly 6,300 healthy, scratch-cooked breakfasts, lunches and suppers daily. They do cooking demonstrations, taste tests and nutrition education lessons, too. They also work with local corner stores to stock shelves with the same affordable, healthful and fresh ingredients that are featured on school menus.

Plus, the organization focuses on locally sourced produce as much as possible. In fact, there are at least two local ingredients on each menu the kitchen creates.

“We work closely with dozens of small, local farmers to ensure that more than 30 percent of all the food items we purchase are grown nearby, reducing our environmental impact and reinvesting in our area economy,” Moore says.

Food is prepared both onsite in schools that have facilities to do so as well as in the kitchen’s commissary by a staff made up primarily of men and women with histories of hardship at living wages.

“We were founded by a volunteer who was disappointed with his experience of feeding the homeless,” Moore says. “He wanted to get to the root cause of hunger and poverty and ultimately rearrange D.C.’s existing resources in ways that would liberate hungry and homeless individuals from poverty.”

That volunteer, Robert Egger, launched a Culinary Training Program as part of the kitchen for residents of local shelters. His focus was hand ups, not handouts.

“Our 14-week Culinary Training Program arms graduates with a desirable skillset that helps them compete in the job market,” Moore says.

Then, in 2008 when the recession hit, the kitchen looked for new ways to create jobs for its graduates.

“We entered into a foodservice contract with Washington Jesuit Academy (WJA), in Washington, D.C., which serves at-risk boys in grades five through eight,” Moore explains. “The school was really excited to form this partnership as we share a lot of the same philosophies and goals for our community. They were genuinely excited for our graduates, many of whom grew up in the same areas as the school’s students, to prepare meals and become part of their culture.”

In 2008, a group of carefully culled graduates began preparing food for WJA’s students. (Those with a history of violence or crimes involving children are not accepted into the program.)

“The quality of food, the attention to detail and to focus on students’ preferences were unlike anything the school had ever experienced before,” Moore says. “It was an instant success.”

Plus, many of the staff members became relatable mentors to children facing serious barriers to educational and economic success. “You’d see them playing hoops after school together,” Moore adds. “Our staff would tell us how rewarding it was to inspire the students to make healthy choices and better life decisions.”

Two years later, in the summer of 2010 when the Healthy, Hunger-Free Kids Act was passed, DCPS caught wind of the partnership. And after learning more about it, the districted encouraged the kitchen to bid on its pilot program.

To ease growing pains while also maintaining its standard of providing healthful, fresh and local food, the kitchen brought on Katie Nash, a registered dietitian who was familiar with school foodservice, as well as Ed Kwitowski, who serves as the director of school nutrition programs but also as the chef.

Together the team launched a successful school foodservice program that has continued to evolve as the kitchen has picked up another public school as part of its ongoing contract.

Even as it grows, the focus remains carefully zeroed in on freshness and students’ preferences.

“DC Central Kitchen provides our students with fresh, nutritious and healthy meals that fuel learning and good behavior each day,” says Elizabeth Leach, manager of nutrition programs & compliance in the office of food and nutrition services for DCPS. “They procure and serve a high volume of local foods and focus on scratch cooking. They bring the experience of homemade meals to the students, incorporating student preferences and learning into their services through student taste tests and student and parent cooking classes.”
In fact, tastes tests are one of the kitchen’s most successful menu-writing strategies.

If a particular menu item fails, the kitchen will re-engineer that ingredient three different ways. They will then taste test with students and take a vote. The winning variation will post to the menu within weeks.

“We served broccoli and the students didn’t touch it,” Moore recalls. “So we created three new recipes, sampled them with the kids and they chose the one with an Asian dressing as their favorite. Now they gobble it up every time we serve it.”

Feedback from students outside of tastes tests has been equally important.

“We serve two vegetables each day, but feedback indicated that the students prefer either all hot vegetables or all cold vegetables, so we’ve tailored the menu towards this preference,” Leach says. “We also make sure that we have a logical flow of related menu items in our daily choices rather than fulfilling the basic nutritional requirements. For example, our hot dogs are served with baked beans and potato wedges, while the turkey Bolognese is served with a romaine salad and fresh carrots.

“The program demonstrates that we can go above and beyond satisfying a functional meal requirement for our students,” Leach continues. “DC Central Kitchen provides our students with freshly cooked food that meet national and local standards, tailored to meet their taste preferences, using local and regional foods and served by friendly staff who are also a part of the community.”