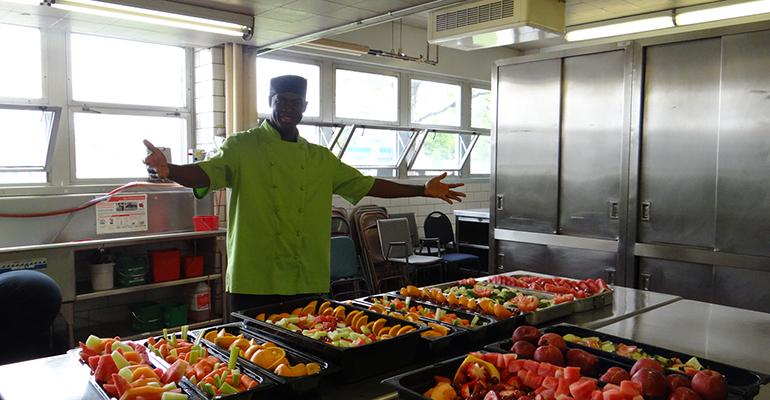 Denver Public Schools raises the ante on fresh and local

With a commitment to more scratch cooking and a huge program-owned greenhouse on the way, Denver Public Schools is making a major commitment to improving its meal quality and freshness.

Scratch cooked meals are an ideal striven for by numerous school nutrition programs, with varying results, hampered as they are by finances, infrastructure limitations and staff capabilities. Add the current labor crunch and the prospects get even more daunting.

Yet, the Denver Public Schools (DPS) has made a major commitment to just that, initiating a series of moves over this year that included forging a partnership with the Brigaid fresh school food consultancy firm to enhance the skills of its kitchen staff and launching a major infrastructure project in the form of a half-acre greenhouse that will be supplying the freshest and most locally grown produce to the district meal program.

As DPS is a major urban district that serves over 75,000 breakfasts and lunches, plus over 9,000 snacks, each school day, the challenge is significant even though over half of its meals are already scratch-made, the result of a commitment launched by former DPS foodservices director Leo Lesh back in 2010.

Related: One On One With: High school signs Food Forward pledge to increase meatless options

“While we’ve been doing scratch cooking for a while, we needed a refresh and we needed skills reinforced because it wasn’t being consistently executed at all of our kitchens,” observes current executive director of foodservices Theresa Hafner, noting that DPS has meal prep at individual school sites rather than a central commissary kitchen. “The chicken alfredo you got at one school, for instance, wasn’t necessarily the same experience as you got at another, and that didn’t make me feel good because that’s not what the program is about,” she adds. 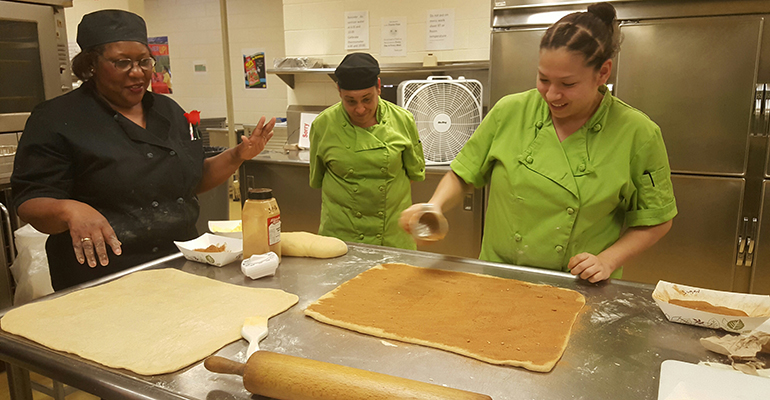 Pursuing scratch meal prep since 2010, Denver Public Schools currently turns out over half its meals from scratch with the goal being 100%.

The Brigaid deal is an extended relationship with a three-year term that began before the pandemic with an assessment period that evaluated the equipment and tools available at each site. Then, beginning in fall 2020, Brigaid began recruiting chefs from around the country to come to Denver and work with staff in DPS kitchens daily, something that is now happening with a dozen chefs on board and on the payroll. Because of their backgrounds in the restaurant world, they bring a perception of expertise to the training and assistance that they provide that would be hard to replicate from in-house, Hafner explains. 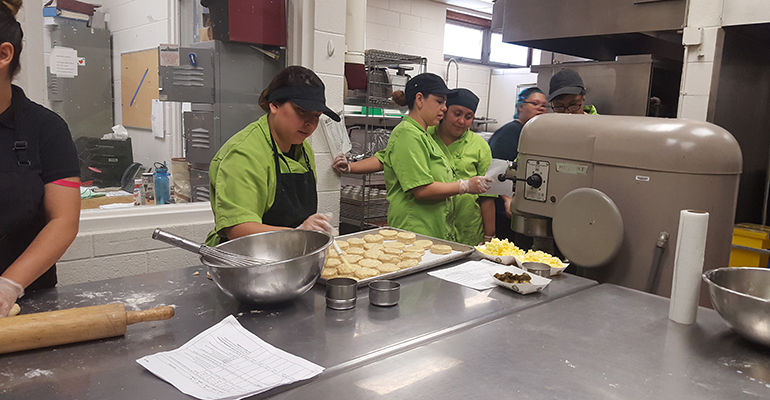 With production occurring in individual school kitchens rather than a central facility, Denver Public Schools is striving for more consistency in meal quality across its sites, hence its partnership with Brigaid to offer training where needed.

“Commercial chefs come with a credibility I don’t necessarily have when I walk into a kitchen,” she offers. “When a commercial chef says, ‘This is how you arrange your workday,’ they will listen a lot more than if I came in with the same kind of message.”

The Brigaid chefs are not creating or changing menus, just helping to execute them better, Hafner emphasizes. “How we change our choices remains to be seen because we’re still planning and fleshing that out but, ultimately, I want everything to be scratch-cooked at all locations, with uniformity of quality and operations running smoothly,” she stresses.

In tandem with scratch preparation is the use of fresh ingredients. DPS farms already turn out about 23,000 pounds of fresh produce for use in the meal program annually. That bounty will be enhanced as DPS is in the process of constructing a massive greenhouse that will cover a half acre and is expected to be plant-ready next spring, Hafner says.

The first crop will be regular and cherry tomatoes, with expansion eventually into other plants like leafy greens, cucumbers, squash and perhaps even strawberries. This isn’t going to be a symbolic farming program either where it supplies a nominal amount of product as a gesture to sustainability principles, Hafner adds, noting that “I think when we’re fully rockin’ and rollin’ we’ll be able to provide all of the tomatoes we need [for the meal program] from the greenhouse.” 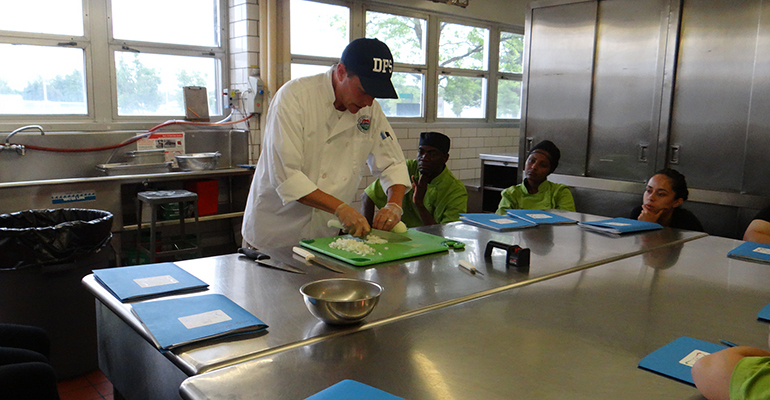 More greenhouse space producing even more crops is a possibility down the line, she adds, but the focus now is to “dial this in really well first.”

To ensure effective operation, DPS has hired a professional greenhouse supervisor funded by the USDA who is helping with design and construction issues and who will eventually hire a staff to work in the facility who will be district employees.

A modified return to normal

DPS has been back to mostly in-person classes since the start of the current school year, with only a couple hundred of the students opting for remote learning from among the 90,000+ enrollment. The remote learners can pick up free meals at their nearest school site while in-school students have a somewhat modified form of traditional school meal service.

“We’re serving fewer choices just to accommodate all this variability in [product availability] because I don’t know what we’re not going to get,” Hafner says. “It’s like playing whack-a-mole, it’s very unpredictable.” 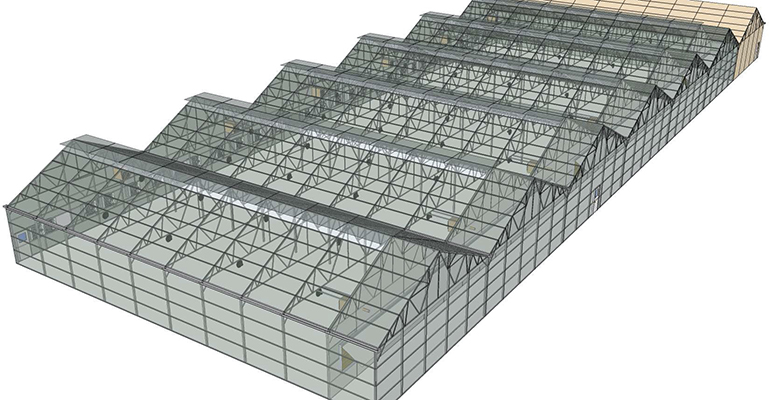 The greenhouse being built by Denver Public Schools will cover a half acre and is expected to fill all of the meal program’s tomato needs as an initial goal.

She cites juice boxes that were in short supply early on as well as tortillas that “continue to be a challenge,” and cereal. “Also, I can’t seem to get milk at a regular clip for my schools, so we’re prioritizing it for our littlest kids when we get it,” Hafner adds

In the cafeteria serveries, “we currently don’t have our Fruit and Veggie Bars—our name for our salad bars—operating at any of our schools but otherwise we’re not doing a lot of pre-packaged except for breakfast, which is still pretty much a grab and go model with everything in clamshell containers that can be taken quickly to the classroom, but for lunch we’re definitely serving on the line.”

Secondary school students walk the serving line getting what they want, often putting them into the clamshell takeout containers that they can then take to eat in designated outdoor areas. The youngest children pre-order the lunches from a set menu that is then delivered to the classroom