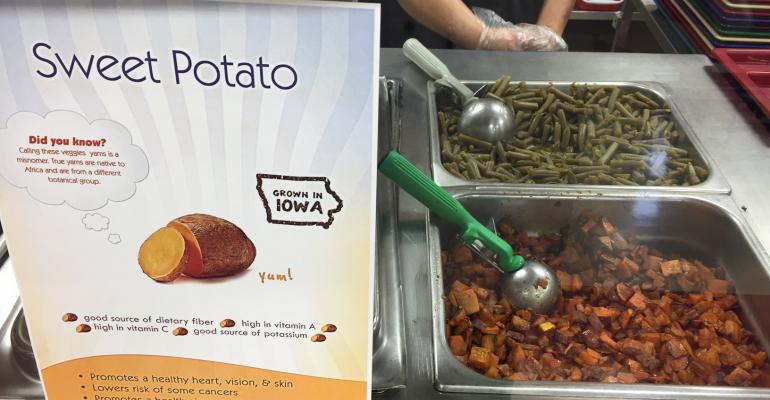 A foodservice program goes out of its way to ensure that students in a highly diverse district feel comfortable.

The foodservice department in Des Moines School District faced a challenge: The Burmese students were going home for lunch rather than eating in the cafeteria at Meredith Middle School.

But it turns out food was at the heart of both the problem and the solution.

“The principal contacted me and said, ‘I have a population of [Burmese] students and for whatever reason they are feeling uncomfortable in the lunch room, uncomfortable with the choices we are offering and uncomfortable even bringing their own food into the lunchroom,” recalls Chad Taylor, executive chef for the district’s nutrition services department. “They were hungry, so they would go home and eat their traditional foods at home, but then weren’t coming back for class. So we needed some way to encourage them to stay for the full day.”

So the department took another look at its lunch menu at Meredith and made sure it was offering choices like a rice dish or noodle dish each day that were more familiar to the Burmese students.

The turnaround was “amazing,” Taylor recalls. “As soon as we started offering [the more familiar choices] and we really made that effort [to show them] that we understand why they’re feeling uncomfortable, they really jumped on board and appreciated the effort we were trying to make for them. They really took it to heart and started to stay on campus.”

They also started bringing in recipes from home. Taylor tried to be accommodating within the limitations imposed by a school nutrition program governed by National School Lunch Program rules.

There were some successes. A commodity catfish fillet was close enough to the Burmese students’ idea of fish to replicate a Southeast Asian seafood dish.

“We were able to match some of the sauces,” Taylor adds. “We were really able to do the Thai sauces and the chili spices that they used.”

What also helped is the district’s practice of putting flavor stations at the end of serving lines, collections of various low-sodium seasonings and condiments students can use to spice up their meals.

“What is interesting is that when we offered some of these [ethnically influenced] items, we got more of our ‘traditional’ students from the Midwest really enjoying the new flavors we were introducing, so we were getting more kids trying it than some of the Burmese students,” Taylor adds.

The situation at Meredith is not an isolated incident at Des Moines Schools, where the administration is putting an emphasis on ensuring that its very diverse student body—about a fifth of the district enrollment speaks limited English, according to state records—is made to feel welcome, and food is a big part of that.

“Administrators have come to us saying, ‘Is there something you can do foodwise to make that student feel more comfortable in the school settings,’” Taylor says. “We’re really having a push from our district to keep that student first in our thought processes.”

That has meant accommodating pockets of students such as the ones at Meredith with distinct meal choices outside of the standard district menu, which is mostly produced in a central kitchen and is uniform across the district’s sites each day.

Recently, an influx of students with Middle Eastern backgrounds has challenged Taylor’s culinary team to find dishes that appeal to this demographic, perhaps by incorporating chickpeas and sweet potatoes. Taylor cites a sweet potato curry the department tested a while back at Hoover High School, which has a significant Middle Eastern population among its student body, that got some positive response.

One advantage Des Moines has in formulating menu items is its central production operation, which allows the culinary team to control what goes into each dish because just about everything is made from scratch.

“For example, if we have to make a curry dish, we can make it vegetarian style or we can turn around and add chicken to it," Taylor offers. "Or if it has a soy ingredient and we need to make a version that doesn’t contain soy to [accommodate] students who can’t take soy, we have the ability to do that.”

There is very limited a la carte in the district, which had a 61 percent free/reduced rate last year and one in which 43 of the 61 meal sites have received Community Eligibility Program (CEP) certification.

Taylor says he tries to follow broad food trends. For example, as local sourcing has become more prevalent, he has tried to incorporate more ingredients from surrounding farms. One example is the sweet potatoes from a local supplier he used in the sweet potato curry dish mentioned earlier as well as in a sweet potato hash piloted on the breakfast menu.

But in the end, “it is the students who are going to drive that menuing process,” Taylor concedes, and keeping up with trends is a way to stay in alignment with their evolving preferences and ensure continued participation.

“I can make something, make up a flavor profile, but if the students don’t take it, or if it stays on the plate, we did not accomplish our goal of making sure that child consumed a nutritious meal.”