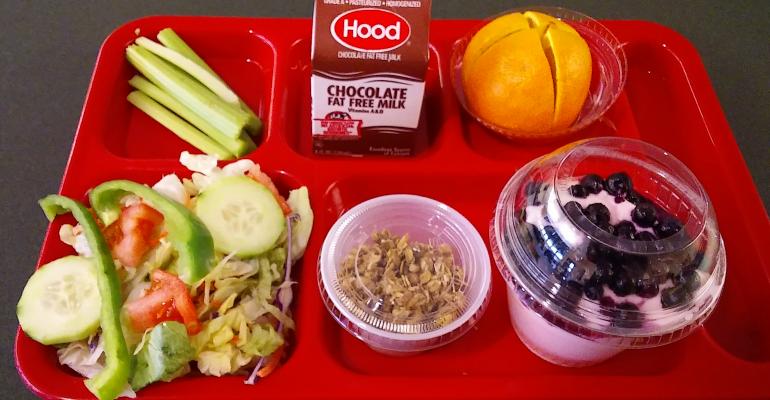 Through an organizational shift, as well as savvy management, Lee Public School cafeterias are operating in the black.

When Lee Public Schools reached out to Lorrie Goodfellow, its foodservice program had just closed out their fiscal year with a $10,000 deficit.

Both districts were willing to take the leap. So was Goodfellow. In February 2016, Goodfellow started splitting her time between the districts, which share the cost of her salary and benefits. Previously, the Lee district employed a full-time director. At the close of the last fiscal year, the foodservice program had more than $21,000 in surplus funds. Lee Public Schools is a 700-student district in a small town in Massachusetts serving about 530 meals daily at Lee Elementary School and Lee Middle and High School. The numbers at Lenox Public Schools are roughly the same.

Andrea Wadsworth, business administrator for Lee Public Schools, says the reorganization not only saves the district money, but also helps the district programs learn from each other and creates opportunities for professional development. Two employees were elevated to supervisory positions and receive training and mentorship from Goodfellow.

But reorganizing the employment structure isn’t the only factor contributing to the program’s current success, Wadsworth notes.

“It’s all about getting the right person.” In this case, one with a laser focus on the details.

The first thing Goodfellow did when she started was to go through the storeroom, refrigerator and freezer. “I purged a lot of stuff,” she says.

Since then, the program has curbed food waste by tightening their inventory and by using past meal numbers and production records to determine what they need to order. They incorporate less expensive whole ingredients into as many meals as they can, using USDA commodity products and even some local produce, such as lettuce, apples and potatoes.

She also connected the schools with fresh produce through the Department of Defense Fresh Fruit and Vegetable Program.

“We had fresh produce before, but now we have it all the time,” Wadsworth says. “It gives more access to our students. We’re all about ‘students first,’ and Lorrie really represents that.”

A notable change to serve student needs is an extended breakfast schedule.

Fifty percent of Lee students qualify for free and reduced meals. Those who eat breakfast at school had to fit breakfast in at the start of the school day prior to the change. Now, they can drop into the cafeteria any time during a generous three-hour block, from 7 to 10 a.m. Teachers help by allowing students to bring breakfast back to their classrooms. Every morning there’s a hot meal option, such as French toast sticks or a breakfast sandwich. They also serve organic yogurt with toppings and an array of a la carte options, such as bagels, whole-grain muffins, fruit and cold cereals. Breakfast participation has shot up since Goodfellow started, from 25 meals per day to between 65 and 70 per day. Since more participation equals more dollars, the success of the breakfast program translates into a healthier bottom line.

For both breakfast and lunch, they also monitor sales numbers and retire meals that students don’t like.

“What sells? What doesn’t sell? We really keep a close eye on everything,” she says.

Goodfellow’s menus are full of comforting lunch options. Students load baked potatoes with chili, broccoli and cheese or opt for a flatbread chicken quesadilla with cheese and green peppers. The taco salad is a big hit. So is a chicken Alfredo dish she pulled from the USDA’s Recipes for Healthy Kids. All of these meals make use of commodity products and affordable ingredients. Getting kids on board is a big part of the equation. Goodfellow and her staff nurture participation through good marketing and a warm, welcoming atmosphere.

The staff treats students as customers, which has resulted in a shift in the culture of the lunchroom.

“We’re here for them. They’re not here for us,” Goodfellow says. “They may be a captive audience, but they don't have to come in.”

This sentiment extends to staff relationships, which may be the dynamic closest to the core of the Lee schools’ foodservice success.

Wadsworth says she believes the staff surpasses expectations because they feel respected and valued and that they work they’re doing matters.

It’s clear that Goodfellow doesn’t take them for granted. “It’s a lot of work, but I have excellent staff. It takes everyone on board to make it happen.”