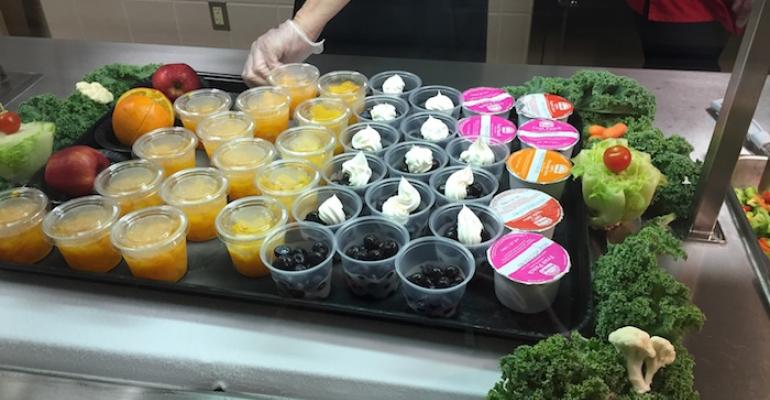 District Goes Back to the Basics

Changing a school meal program that had plateaued into a comfortable heat-and-serve routine for years is not easy. It means not only more employee training, ground-up menu development and perhaps some equipment investment but also a fundamental culture change.

That’s what they are trying to do in the Mansfield (Texas) ISD starting this past fall.
The results so far are modest but pointed in the right direction. Lunch participation now stands at around 54 percent, up about three percent from a year ago and slightly above the 1.8 percent enrollment jump.

The goal is at least 65 percent participation by next January, says Rita Denton, director of student nutrition. That number refers to full, reimbursable meals, not a la carte, she emphasizes.

“We certainly offer a la carte snacks and entrées and drinks, but the main source of our revenue is the reimbursable breakfast and lunch meals,” she notes. “It is great to be able to offer all entrées in the reimbursable meal package. Parents prefer seeing a balanced meal in their child’s hand versus a side of breadsticks with a lemonade. We strive to teach students (and reinforce parents) in all grade levels how to build a great plate, a life skill that will benefit them as they grow out of the K-12 realm.”

Mansfield is a growing district just south of Arlington in the Dallas-Fort Worth Metroplex. It has an enrollment of around 33,400 students, of which around 39 percent qualify for free or reduced price meals under the National School Lunch Program.

Fast growth in the 1990s strained food preparation infrastructure and prompted a switch to heat-and-serve products. More recently, the new requirements that came with the Healthy, Hunger-Free Kids Act prompted a rethink and a return to more onsite prep.

To facilitate that, the district last summer hired Hunter Oeffner, a former commercial restaurant chef, with the title of culinary trainer. Oeffner’s role is not just to train staff but also to repurpose the menu to emphasize more scratch-made items that can realistically be made by the staff at each of the district’s 41 school kitchens.

Oeffner says he’s already introduced a couple of quick-scratch selections such as a lasagna dish and a King Ranch casserole that he describes as a “kind of enchilada lasagna” (King Ranch is a regionally popular entrée traditionally made with chicken).

On tap for next year are a revamped mac and cheese using fresh ingredients and a meatloaf. Of the latter Oeffner says, “We’re going from buying a product with more than 30 ingredients to one we make fresh every morning that has only six.”

Many of the 30 ingredients in that manufactured product were familiar to Oeffner only because of his background as an R&D chef. The six in his recipe are not nearly so esoteric.
Oeffner began his job by visiting each of the school sites, touring the facilities, meeting the staff and talking to the young customers.

“One thing I found out pretty quickly was that we were doing a poor job of training our people after hiring them,” he recalls. Oeffner started by upping the training regimen both in time commitment and content.

“We added kitchen tours, simple knife skills and simple sanitation procedures, things that, if you had no experience in the food industry, you needed before you could learn other facts.”

Of course, not everyone took to the new approach and “we ended up losing some managers, some specialists, but the people we trained to replace them were so much better prepared and had such a better attitude that the transition wasn’t as bumpy as we expected.”

Now, there is monthly training and a career advancement program that helps employees move up. Compensation has also been upped to reward successful mastery of specialized skills and to instill professional pride.

As for equipment—necessary at each site if production was to take place—the basics were there: a convection oven, a tilt kettle and a steamer.

“My concern was that because we had so much frozen bagged stuff come in, we were using the steamer way too much. We were using it on frozen hamburgers and to make rice and a lot of it was taking the flavor out. So we took a step back and taught people how to use a convection oven for some of our frozen products. We showed them how to do a dry heating process in the convection ovens, covering the hamburgers flat on a baking sheet with a little beef consommé, which steams and bakes at the same time without losing the flavor.”

There is also a new marketing initiative centered on a train theme. One result is a special “Chew Chew, I Tried Something New!” campaign that brings lesser-known products once a month or so to elementary and intermediate cafeterias for sampling. The most recent involved purple potatoes roasted with olive oils, salt, pepper and some spices. It was popular enough for Oeffner to contemplate putting it on the monthly menu cycle.

He admits a product like the purple potatoes is pricey in the context of a school meal program, but insists that the occasional menuing of such specials has educational as well as promotional and financial benefits.

“Student nutrition still means you’re an educator,” he says. “You do it once a month and the kids look forward to it, the teachers look forward to it and you bring parents and people from the community in and that ups your profit margin.”

Growing the scratch-made portion of the menu at Mansfield ISD is a long process, Oeffner admits. Currently, in the spring of his first year, the department is up to about 7 percent scratch (it was 1 percent or less when he started).

“Our goal is to get to around 25 percent by the middle of next school year,” he says.

It has become quite a commitment for a culinarian with no background in school nutrition.

“It was really by happenstance that I ended up in this position,” he laughs. “I was getting to a point where I was ready for a change, but I wanted to stay with the culinary experience. A woman I had met on a mission trip was the catering manager for the school district and she told me they were looking for a culinary trainer, someone with a chef background to help them refocus and make some changes. I applied and I was the last man standing, so they hired me.”