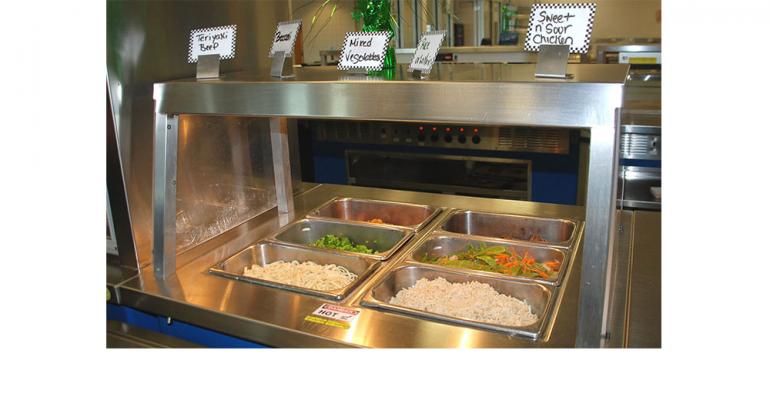 The Lunch My Way program offerings a variety of cuisines with the option for customization.
News & Trends>K-12 Schools

Increased grab and go as well as a retooled café line with weekly theme meals are among the changes.

This is thanks to Odits Collins, coordinator of foodservice, who came to the district last year after more than 20 years in the assisted living foodservice segment. He began his new career by meeting with students throughout the district’s 13 schools to learn more about their likes, dislikes and desires for the child nutrition program.

So he and his team set to work introducing more grab-and-go offerings at a number of the district’s high schools. Now instead of three or four reimbursable options, students have up to 11. This includes items like chef’s salads, Asian salads, chicken Caesar wraps, tuna salad wraps and much more.

“We don’t have salad bars in our schools, so by increasing grab-and-go salads, sandwiches and wraps, we not only move students through the line more quickly, but also give them a healthy, composed salad as a daily option,” says Collins.

At Decatur High School, grab and go wasn’t the only element primed for change. Collins found that students there craved more variety on the hot line, too. Working with the schools’ foodservice professionals, the district developed the Lunch My Way program.

“Each week, we feature a different theme, whether it’s Asian, Mexican, American—or something else,” says Collins. “The themes rotate and the line is set up so that students can customize their dish as they’d like. It’s become a really fun way for them to have lunch.”

Decatur High School has four lunch lines, so the staff simply rearranged one of the lines to make it a dedicated Lunch My Way line. Best of all, no costs were involved in the transformation and many of the recipes on the new menu were simply altered from existing recipes (though some new dishes were also introduced).

“There is some additional prep, but we have a really gifted staff and manager who have been at the school for a long time,” says Collins. “They are as excited about this new program as the students and there have been no hiccups in the rollout.”

With all of the recent success at the high schools, Collins plans to roll out similar programs at middle schools in the coming school year as well as introduce a Breakfast After the Bell program.

“We’ve had very smooth transitions with all the new programs and there has been so much excitement from the staff, the parents and the students,” says Collins. “At the end of the day, we’re pleasing our customers and doing what’s best for our students. That makes it all worthwhile.”